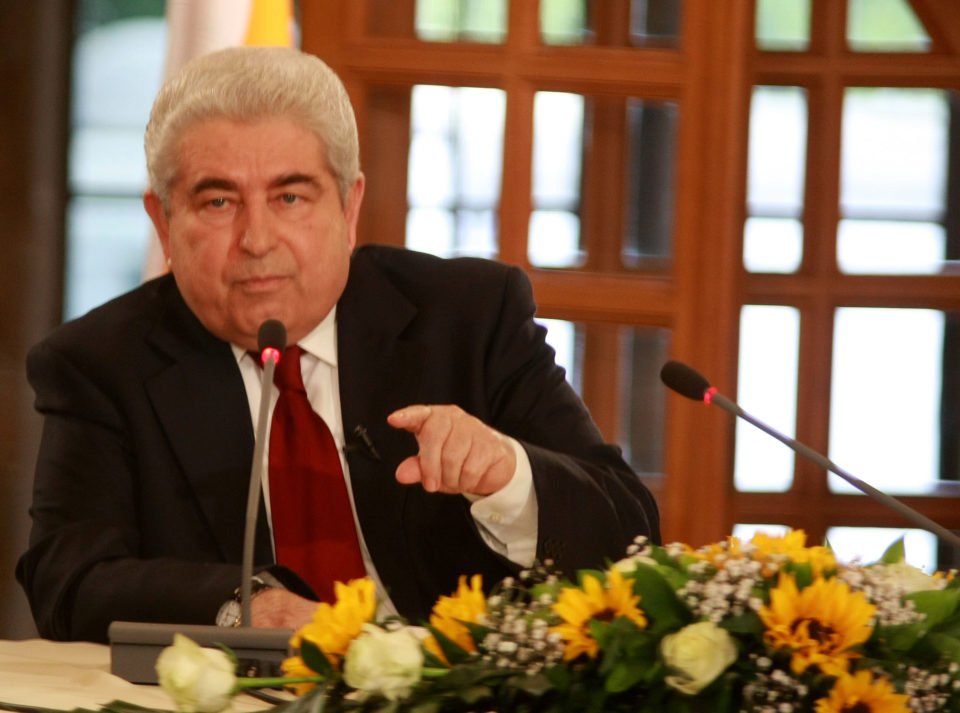 By Michael Theodoulou and Jean Christou

Demetris Christofias, who died on Friday aged 72, served as the sixth president of Cyprus since its independence in 1960, holding office from 2008 to 2013.

It was the first time that communist party Akel’s had fielded its own candidate in a presidential race. Traditionally, the communist party had played the role of king-maker: its support helped secure the presidency for Spyros Kyprianou in 1983, George Vassiliou in 1988 and for Tassos Papadopoulos in 2003.

Like his predecessors, and his single successor so far, Christofias failed to reach a comprehensive settlement to the Cyprus problem even though during the first part of his presidency his Turkish Cypriot interlocuter, Mehmet Ali Talat, like him was perceived as moderate.

The biggest accomplishment both leaders managed to achieve together was the opening of the now-busy Ledra Street crossing point in April 2008, and the setting up of 16 bicommunal technical working committees, a handful of which are still active and partially successful today.

The second half of his presidency however was marred by both the tragic munitions explosion at the Mari naval base in July 2011, killing 13 people and almost destroying the main power station nearby, and the subsequent banking crisis in early 2013 that led Christofias’ successor Nicos Anastasiades into a bailout and a devastating haircut on bank deposits in March that year. Christofias did not seek a second term making him the first incumbent Cypriot president not to do so.

Demetris Christofias was born on August 29, 1946 in Dikomo in the Kyrenia district.

The son of a builder, he went to school in Nicosia and graduated in 1964. When he was only 14, he had joined the progressive secondary-school students organisation, Peom. At 18, he moved up to Akel’s youth wing Edon before heading off to then Soviet Union to study at the Institute of Social Sciences where he earned a history degree. He spoke fluent Russian. Christofias, a self-confessed atheist, met his wife Elsie there and they married in 1972 back in Cyprus. The couple went on to have three children.

Back home, he moved up the ranks at Edon where he became its leader in 1977 until 1987. He was also a member of Akel’s central committee. When Akel’s long-time leader Ezekias Papaioannou died in 1988, Christofias was elected general-secretary of the party.

He was first elected to the House in 1991, and was re-elected twice more. After the 2001 parliamentary poll, he was also elected House Speaker, and was so again in 2006, holding the post until elected president two years later.

After his victory, thousands poured into the streets waving red party banners and Cypriot flags. Christofias won 53.36 per cent of the vote.

“I extend a hand of friendship to my compatriots the Turkish Cypriots and their political leadership, I call on them to work together for our common cause, a country of peace,” Christofias, then 62, told a stadium full of supporters.

Known for often referring to himself in the third person, Christofias was seen by many as a thin-skinned politician who seemingly longed to be popular and respected but was ill-equipped to cope with the criticism heaped upon him during the two major crises of the second half of his presidency. The fact that he refused to accept any responsibility either for the Mari blast or the bailout did not help. For weeks, people protested outside the presidential palace.

Christofias responded in a written statement saying: “The President of the Republic categorically denies that he has personal responsibility for the incident. This conclusion (by the investigator) is not substantiated by evidence or the material which was submitted to the board of inquiry. On the contrary.”

At some point later, he even hinted that it might be sabotage. His long-time friend and defence minister, the now-deceased Costas Papacostas, took the fall.

In May 2012, Christofias announced he would not seek re-election, saying that his decision fulfilled an earlier promise not to run for a second term if peace talks were not close to an accord. By then he probably knew that voters would never return him to office — and Akel clearly viewed him as a liability.

Akel had also bitterly disappointed the Turkish Cypriots in 2004 when it backed Papadopoulos’ rejection of the Annan Plan, which meant that in effect the Greek Cypriots alone entered the EU in May that year.

Christofias insisted that Akel’s “no” was different from the “resounding no” demanded – and achieved – by the hardline Papadopoulos. Christofias argued that he wanted a “soft no”, designed to “cement a yes” at a later stage, on terms more acceptable to the Greek Cypriots.

His critics believe that he put his desire for Akel to remain in government (as Papadopoulos’ coalition partner) above his professed commitment to a settlement.

By then talk of reviving the Annan Plan in any form was taboo. Moreover, Diko, the party Papadopoulos had once led, was a coalition partner in the new Christofias government, along with Edek, the socialist party with a hardline stance on a Cyprus settlement.

Between September 2008 and the same month in 2009, Christofias and Talat met 41 times, making enough progress for the UN to try to accelerate the process. ‘Presidential’ elections were looming in the north and there was concern Talat could lose to Dervis Eroglu, a hardliner.

However, Christofias rejected any talk of “asphyxiating timeframes” or UN arbitration, a stance backed by Russia. Even so, intensive settlement talks in January 2010, which focused on the issue of governance, made significant progress. Encouraged by what became known as the ‘Christofias-Talat convergences’, the then UN secretary-general, Ban Ki-Moon visited Cyprus at the end of January, hoping to push the negotiations to an end-game in March before the April 2010 Turkish Cypriot elections.

Christofias, however, refused to have the convergences codified and published and Talat was ousted by Eroglu. In any case, Christofias had much more to deal with entering the second half of his presidency.

Although Christofias had better contacts with the Kremlin than the White House and had once joked he was the “red sheep” of Europe, the EU had initially largely overlooked his communist background when he was elected. It preferred to take encouragement from his avowed intent to resolve the Cyprus problem.

But there was unease among other EU members when Christofias secured a €2.5bn loan from Moscow in December 2011. Two months earlier he had consented to a Greek debt write-down that wiped out €4.5bn in Greek government bonds held by Cypriot banks. His government spent the loan on regular expenditure rather than using it to safeguard the banking sector.

The following year Christofias was back in Moscow to plead for a €5bn loan. Belatedly, he had also approached Brussels for financial assistance. But he hoped that another injection of Kremlin funds would mean he could avoid the economic reforms, privatisations and austerity measures demanded by the EU and IMF in return for a bailout.

In a candid December 2016 interview with Greece’s Sky TV, Christofias volunteered rare criticism of President Putin for spurning his “persistent and repeated” requests for a loan of up to €7bn. He revealed that he told the Russian president: “Give us this loan and I guarantee you that over the next 50 years, Cypriots will be blessing Russia, no matter who will be president of the republic.”