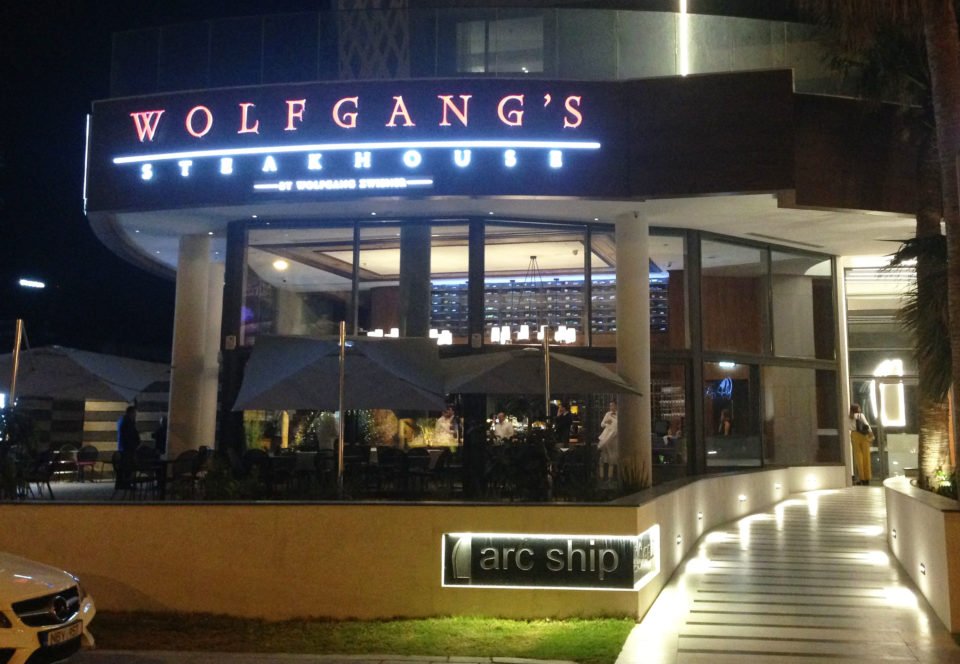 A joy is how I would sum up my overall experience at Wolfgang’s Steakhouse, apparently a household name in the States, and a franchise synonymous with quality and style. However, until you have pushed open the heavy glass doors, stood under the intricate oval crystal chandelier, passed the cutest glassed-in cellar ever (housing an impressive hand-picked selection of international wines priced from €19 to €6,500!), sat at the linen-clad tables under a simple mosaic ceiling, looked through huge floor-to-ceiling windows at the large illuminated “W” on the wooden terrace, and sampled the menu, you do not realise that you have bypassed traditional standards to arrive at gourmet excellence.

This is the first Wolfgang’s in Europe, the 22nd worldwide (the 23rd is set to open in Japan around now) and it is clearly raising the bar for fine dining. Named after Wolfgang Zweiner, who worked in a steakhouse for decades, the silver service franchise is now owned and run by Wolfgang’s son Peter and a group of partners, one of whom is Cypriot, thus its European expansion starting with Cyprus.

We begin with a delicate breaded crab cake morsel to whet our appetites, (not that they needed much whetting!) and move swiftly on to the Seafood Tower, a collection of lobster halves, giant prawns and a mound of crab creatively displayed on a large platter atop a small stand. I brave the ‘pretty woman’ moment, naïvely grasping the utensils for “cracking” the lobster and marvel at the succulent meat within. Devastatingly, a small portion falls towards the ground, only to be deftly caught and discreetly removed by the magician of all waiters, Doni, who has been brought over specifically to train the local staff. He is, without a doubt, one of the restaurant chain’s finest assets – his tableside manner and knowledge of the restaurant and its menu exceptional.

Salads appear next. First a Beverly Hills Chopped Salad (named as such due to its popularity at the Wolfgang’s restaurant in Beverly Hills) comprising an interesting combination including feta, avocado, peas, corn and lettuce – all chopped up into tiny pieces, and a Wolfgang’s Salad, which is much more my style: prawns, chunks of deliciously sinful Canadian bacon, chopped green beans, tomatoes and peppers on a bed of iceberg lettuce. Portions are huge but surprisingly light – perfect as an accompaniment or entrée – with each ingredient complementing the next for a wonderful taste sensation.

But it is the next course which has us salivating merely upon reading it: USDA Prime Dry Aged Porterhouse Steak. Wolfgang’s only use Black Angus or Angus beef imported from the USA. Of all meat in the USA, only two per cent qualifies as USDA Prime. The meat is dry aged on the premises in its own dry ageing box for 45 days, being butchered and prepared on the day it is used to ensure maximum freshness and flavour. The price tag is higher (€52 per person, to be specific) but not at all unjustified. Dry ageing forms an all-over crust which seals in all the flavours and moisture of the meat, as opposed to vacuum-sealed wet ageing, where the juices all seep out into the bag and are lost upon opening it. This crust is removed prior to serving and once cooked, the meat is transformed into the most magnificent, mouth-watering, tender meal and well worth every cent! The sizzling, slightly-seasoned 1,000g portion is served, cut into segments from the bone, its scent wafting temptingly through the restaurant the second the kitchen door opens. I don’t think I’ve ever been so excited for a meal before! And it lives up to every bit of expectation, daring me to try to add ground salt or pepper (I cannot bring myself to!). I defy anyone who says it’s not worth the extra… there is simply no comparison with a regular steak – even a perfectly-cooked one!

Homemade desserts follow on a platter: New York style baked cheesecake, creamy and light, which is, by far, the tastiest and tends to be the signature dessert; Chocolate Mousse – rich and with a strong cocoa flavour; and traditional Tiramisu, though there are many more on the menu.

In over 20 years of living in Cyprus, this meal is one of, if not the best, meal I’ve ever had.

Eleven out of ten, Wolfgang’s. Thank you for the experience!

WHEN daily 5pm to midnight