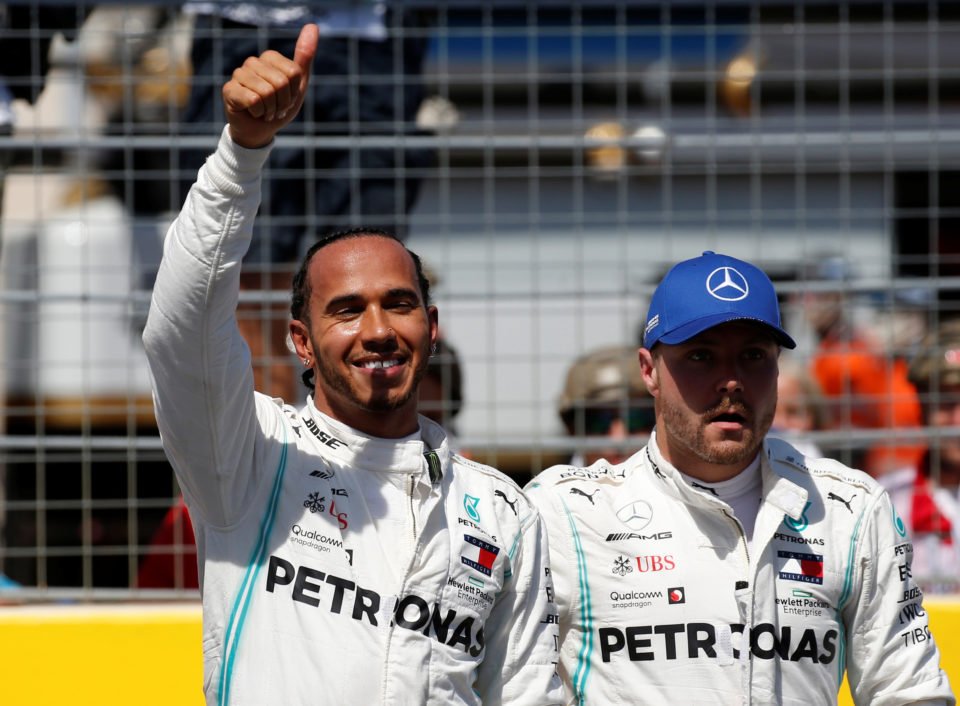 Lewis Hamilton is in the box seat to extend his championship lead after securing pole position for the French Grand Prix.

The world champion delivered another one-lap masterclass to see off the challenge from Valtteri Bottas in the sister Mercedes.

Formula One’s all-conquering team proved the class of the field yet again to lock out the front row, with Ferrari’s Charles Leclerc a distant third, and Sebastian Vettel a miserable seventh.

Hamilton, who is 29 points clear of Bottas in the race for his sixth world crown, has won five of the seven rounds staged this season.

And the 34-year-old British driver will be expected to add to that tally at the Circuit Paul Ricard on Sunday after claiming the 86th pole of his life – now 20 more than any other driver.

Bottas had appeared to hold a slight edge over his team-mate this weekend but Hamilton pieced together a fine effort to finish 0.286 seconds clear, improving his laps as the pole shootout wore on.

“I was just chipping away, and the last two laps were the ones,” said Hamilton. “I am happy I got the potential out of the car.

“We are all working our butts off out there. Valtteri had the edge through Q1 and Q2 and I was still dialling in the car, but once I got to Q3 I knew where I had to find the time.

“The first lap was fantastic. I went out for the second run, and I was on for one of the best laps I have done for a long time – I was up four and a half tenths – but it is windy out there and I lost the back end through the penultimate corner.

“I am grateful to be where I am. It is going to be a close race.”

For Vettel, his underwhelming campaign hit a new low after he could manage only seventh.

The four-time world champion, already 62 points behind Hamilton in the standings, lost control of his Ferrari through the chicane and had to abort his opening flying lap.

He failed to hook up a second lap, and crossed the line an eye-watering 1.4 sec slower than Hamilton, and behind both McLarens.

Norris has not been fazed by Formula One life, and the British teenager continued his encouraging start by putting his McLaren fifth on the grid.

McLaren are enjoying a resurgence this year, and although they remain a long way off ending a seven-season winless run, they can be excused for feeling they are turning a corner.

Carlos Sainz finished sixth in the sister McLaren with both orange cars within striking distance of Red Bull’s Max Verstappen.

Indeed, Norris was just nine thousandths behind Verstappen on a day he is unlikely to forget in a hurry.

The 21-year-old Englishman was nearly half-a-second clear of the struggling Pole.