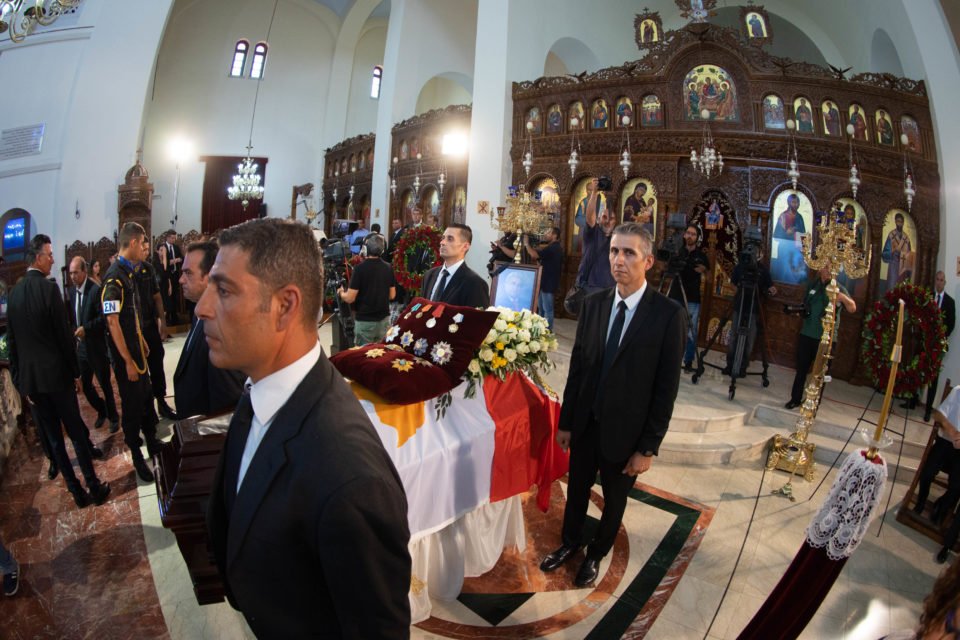 Former president Demetris Christofias was buried on Tuesday in Nicosia in a state funeral that saw thousands of people attend the funeral, walk with his coffin to the church and pay their last respects earlier in the day at the building of left wing union PEO, where his body was in state.

Christofias, born in the village of Dikomo in the north, died last Friday, he was 72 years old. He served as the sixth president of the Republic of Cyprus from 2008 to 2013, and officials from both sides of the divide in addition to politicians and officials from abroad attended the funeral.

One Turkish Cypriot woman, Fatma Kismir, brought dirt from Christofias’ village to put in his grave. The woman told CyBC that he deserved to be buried with the dirt of his birthplace.

His son Christos speaking at the funeral said his father died longing for his village, which he left with his wife Elsi in 1974 and their then baby-girl Marianna.

Three rifle shots were fired during his burial to honour the former president, whose coffin was carried into the church by the men of his security service. It had been taken there in a gun carriage procession.

The funeral was held at the Ayia Sophia church in Strovolos where the coffin covered in a Cypriot flag was greeted by thousands gathered inside and outside the church.

Officials from the north were also in attendance, including the spokesman of Turkish Cypriot leader Mustafa Akinci, Baris Burcu, who laid a wreath on behalf of Akinci’s family. The deputy head of the coalition in the north, Kudret Ozersay also attended the funeral, along with his wife Aliye, former Turkish Cypriot leader Mehmet Ali Talat, and the heads of other political parties.

During his eulogy, Christofias’ son, Christos said the former president was a man of the people, and that he was easily moved. “You would tear up, dear dad, because you always remained a good-hearted and sensitive person. This is the best thing you have bequeathed to us.”

He wished his father a good rest and comfort, and said that he and his siblings would always honour their humble beginnings, noting that his father grew up in poverty, and rose to his position with the same humility.

During his eulogy, Akel leader Andros Kyprianou said that the most important thing Demetris, as he said the people called him, did was that he struggled and dreamt with the people.

Kyprianou said that led to Christofias’ rise in the party and then to the position of president, noting however that the former president always remained humble, and honoured his poor beginnings in Dikomo.

“It is an undeniable truth that comrade Demetris Christofias taught all of us what it means to overcome our limits and to work as he did, day and night, and what it means to push away tiredness and sickness,” he said.

Kyprianou also commented on the convergences reached with the Turkish Cypriot community during his presidency, saying that they gave hope that the two sides could peacefully coexist in the Republic of Cyprus.

Writing in the book of condolences that was opened for Christofias, Tsipras wrote: “It is with great grief that we bid farewell to former President of Cyprus Demetris Christofias and honor his contribution to his country, Cyprus, in his capacity as a Member of Parliament, President of the House of Representatives and President of the Republic.”

Approximately 8,000 visited PEO to pay their respects and give condolences to the former president’s family.

The church service was conducted by Bishop Nikiforos and the body was buried in the cemetery of Engomi.