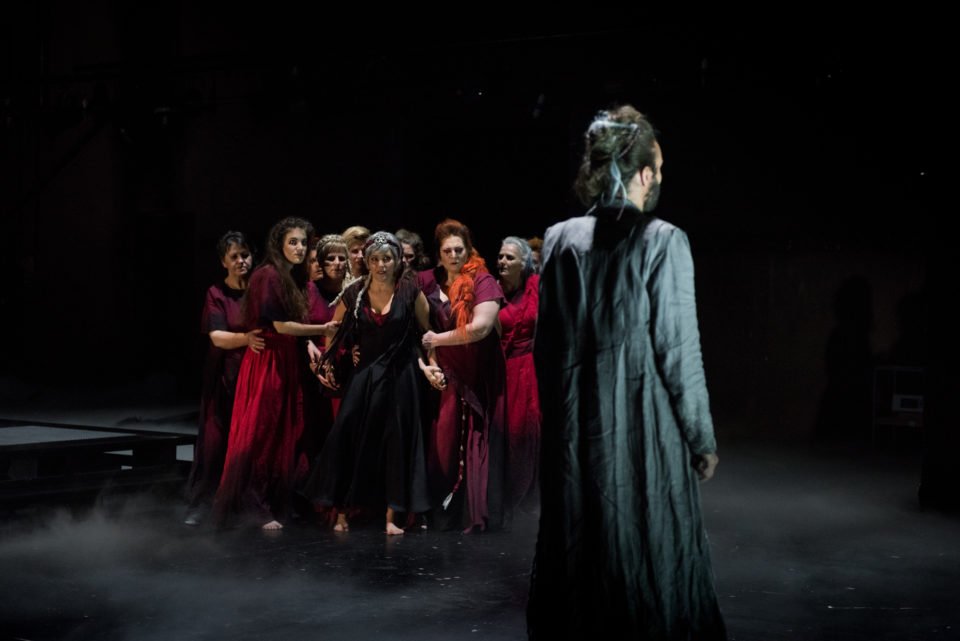 “Theatre is live and it’s fragile but there’s strength a lot of the time in the context,” says Slovenian director Jaša Koceli about Greek theatre and his production that will open the International Festival of Ancient Greek Drama in a couple of days.

After touring Slovenia, the 35-year-old director and the Slovene National Theatre Nova Gorica are bringing their production of Euripides’ Trojan Women to Cyprus for two performances, on June 28 at the Paphos Odeon and June 30 at Skali Aglantzia.

Jaša is taking on an important Greek tragedy, yet his admiration for this type of theatre took a while to develop. It wasn’t until he found himself in the ancient Greek theatre of Epidaurus and falling in love with a performance there that his journey began. It was something like being on a date, he explains, shaking with the feeling of sitting there in contemporary society thinking that 2,500 years ago people did just the same things.

Later, he read The Trojan Women and was shocked by how relevant its stories still are today. “We don’t have the stories of the women or of the victims of war today,” he says. “We get their pictures but we don’t take time to listen to them or we cannot come to the connection with them and it’s a brave thing Euripides wrote from the perspective of victims and women.” So, having never been done before in professional theatre, he first presented the play in Slovenia in 2018.

The performances in Cyprus, although in Slovenian, should still convey Euripides’ strong verses. The text itself is so strong when it is spoken, as the director shares, that it doesn’t matter whether it’s in Greek or another language. “Maybe something will not be lost in translation but found in translation,” Jaša almost jokes. But fear not, Greek and English surtitles will be on.

The Trojan Women is an enormous piece of work, not only for its context but also for the strong female roles it embodies, unusual for the history of drama. “Hecuba is possibly one of the most amazing roles for actresses. It’s a mountain,” he says. The cast performing in Cyprus is made up almost entirely of women just like in the original Slovenian production although a few men will play the male roles.

This production however also a includes a poet of Palestinian origin who will end the performance with her poem, half in Arabic, half in English which she wrote specifically for this performance. More elements will be added to the performance and some things will even be done on the spot, the director explains. Nonetheless, Jaša’s adaption of Trojan Women tries to stay true to Euripides as the director felt it was his obligation to have a faithful production.

What Jaša is most excited about is performing in an ancient theatre, although that does present certain challenges. A play in an open theatre is bound to differ from one in a closed theatre and there are certain technical limitations to consider but the natural environment is a big plus, the director admits.

In any case, no performance is the same as it depends on the setting, the audience and the local culture and history, factors the director has taken into consideration.

Jaša and his team worked heavily on music and emotions for this production which he believes are universal, hoping that audiences from different parts of the world can connect. “Ancient Greek drama can be almost anything yet to find this connection with the audience is the job of every group, every director,” he says.

In his theatrical, creative work, he doesn’t believe that art should just educate but an array of emotions and ideas can be experienced. “I don’t want to be educational with art but I want to be educated. I believe that democracy is a daughter of theatre because in theatre for the first time they opened the public, they started talking and sharing stories and democracy developed after that. So, it’s a strong institution man developed for his needs and we still have it. I can be really grateful to work in theatre because of this big heritage.”

Perhaps this is why he wants to leave an open interpretation to his production, allowing the audience to “see what they will see and feel what they will feel. I don’t have any instructions for that. I felt that this story, this destiny of people is really important and it needed to be done.”

Excited to be part of the festival, the director says it is great to see one with such a specific focus. After his performances in Cyprus, the future for Jaša’s Trojan Women seems bright despite not having confirmed performances yet. He will continue to work on ancient Greek drama as next year he is presenting Electra in Lithuania.

The Trojan Women by Euripides