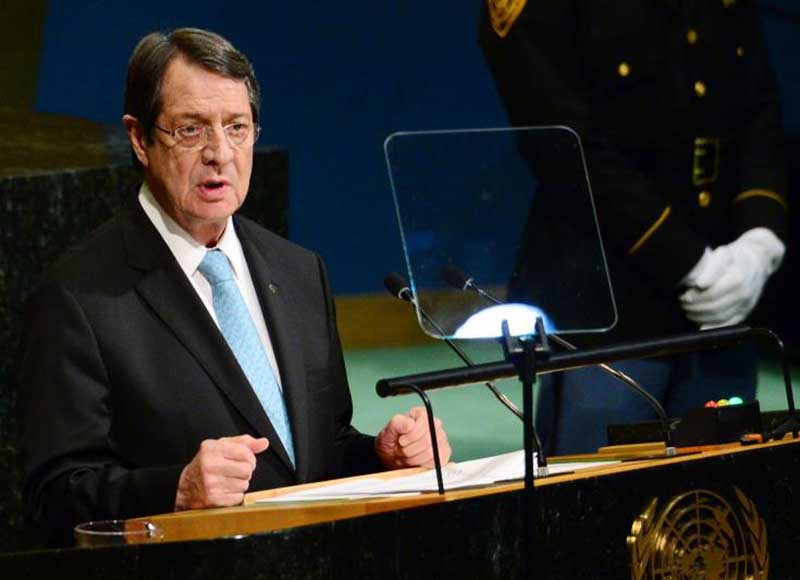 President Nicos Anastasiades on Wednesday night described as “unfortunate” an amendment to a bill out of Washington to end the decades-long US arms embargo on Cyprus that would require Cyprus to deny docking facilities to Russian military vessels if the legislation is to be approved by the Senate.

The last-minute amendment was inserted when the Senate Foreign Relations Committee approved the bipartisan legislation on Tuesday in Washington. It is now slated to go to the Senate for discussion.

The amendment asks that the US president certify to the appropriate congressional committees not less than annually that “the government of the Republic of Cyprus has made and is continuing to take the steps necessary to deny Russian military vessels access to ports for refuelling and servicing.”
The second amendment asks that the president certify that Cyprus “is continuing to cooperate with the United States government in efforts to implement reforms on anti-money laundering regulations and financial regulatory oversight”.

Both amendments are clearly designed to distance Cyprus from Russian influence in the military and financial spheres.

Anastasiades said he was saddened by the amendments which “affect the independence and sovereignty of the Republic of Cyprus to a large extent”.

“To date, facilities to any country were always granted for humanitarian reasons and I don’t think such conditions can be set, especially with a country, and I’m talking about America, with which we seek further strengthening of our relations. I am under the impression that the amendment was unfortunate,” he said.

In February 2015, Anastasiades and his Russian counterpart Vladimir Putin signed an agreement allowing Russian military ships access to the island’s ports. At the time international players expressed concern that the agreement signalled that Nicosia was shoring up already-close ties with Moscow, though the government insisted the arrangement was long-standing and it had merely been put in writing during Anastasiades’ Moscow visit.

The island was also still heavily dependent on Russian investment at the time, just two years into the financial crisis, and in debt to Russia for €2.5 billion.

Since then Nicosia has been shifting away from Moscow politically due to deteriorating relations between Russia and both the US and EU, and financially, due to stricter anti-money laundering regulations and the cleaning up of the island’s banking system. The loan was also paid off this year.

Cyprus has also forged a series of trilateral alliances in the region over the past two years, particularly with Israel and essentially focused on the energy sector, which is the basis for the US bill titled ‘The Eastern Mediterranean Security and Energy Partnership Act of 2019’.

The initial draft stated only that the US administration should submit to Congress a strategy on enhanced security and energy cooperation with countries in the Eastern Mediterranean, as well as reports on “malign activities by Russia and other countries in the region”.

The amendments takes the issue a few steps further and appears to place Cyprus in a tight spot.

But a written statement from government spokesman Prodromos Prodromou earlier Wednesday evening said Nicosia considered it “particularly important that the US recognises the role of the Republic of Cyprus in a region of geostrategic importance like the south eastern Mediterranean”.

“We welcome the importance assigned on our country, which reflects the upgraded relations between Cyprus and the USA,” he said. He then repeated what Anastasiades said about the long-standing humanitarian assistance Cyprus offers in the region.

However it remains unclear whether Russian ships docking for “refuelling and servicing” will be considered humanitarian aid by the US Senate for the purposes of the bill.

“The US is clearly angling for Nicosia to take a position one way or another,” said political analyst James Ker-Lindsay.

He said it would be interesting to see how Nicosia plays it as it wants to get closer to the US, especially as part of its strategy of courting ties with Israel. He said Cyprus would also not want to alienate Russia too much as it would not want to lose the Russian veto, especially given US noises over Unficyp.

“But Cyprus is nothing if not adept at playing both sides. Fifty years of non-alignment taught it well. Perhaps it finally will have to make a choice. Or maybe Nicosia will find a way of balancing, as it always has,” Ker-Lindsay added.

The government clearly sees the bill as a political tool that could be used to pressure Turkey or help prevent its violations of the island’s exclusive economic zone (EEZ). The US bill would impede the transfer of F-35 aircraft to Turkey, as long as Turkey continues with plans to purchase the S-400 air defence system from the Russian Federation.

It also contains a technical amendment that creates a separate chapter for Turkish violations of Cyprus’ EEZ and the obligation of the Secretaries of State and Defence to submit reports to Congress on this.

Only Akel issued an announcement Wednesday saying the amendment “unfortunately justify our beliefs that this makes our country an area of international confrontation and jeopardises the relations with other countries that Cyprus needs at least equally with the US,” party spokesman Stefanos Stefanou said in a written statement.

He was referring to the fact that both Russia and the US are permanent members of the UN Security Council on whose support Nicosia relies when it comes to the Cyprus issue.

“There is no need for a profound analysis to figure out that Cyprus has indeed hitched itself to the US wagon,” Stefanou added. “The relations of the Republic of Cyprus with a very important country, such as Russia, a permanent member of the Security Council are very seriously threatened.”

Moscow itself, in recent months has been belligerent on the issue of what it perceives as Nicosia move towards the West. In December it warned that any militarisation of Cyprus in the direction of the US would “inevitably lead to dangerous and destabilising consequences for Cyprus itself”.

The threat was scaled back two days later when the Russian ambassador said it had been directed at the US and not Cyprus.

The bipartisan US legislation was authored by Democratic Ranking Member Bob Menendez and Republican Senator Marco Rubio, according to whom it would allow the US to fully support the trilateral partnership of Israel, Greece, and Cyprus through energy and defence cooperation initiatives—including by lifting the prohibition on arms transfers to Cyprus.

It also authorises the creation of a United States-Eastern Mediterranean Energy Centre to facilitate energy cooperation between the US, Israel, Greece, and Cyprus, plus foreign military financing and international military education and training assistance for Greece and Cyprus totalling a couple of million dollars for the fiscal years 2020-2022.

Silva to leave Man City at end of next season

25,000 dogs to be microchipped free of charge