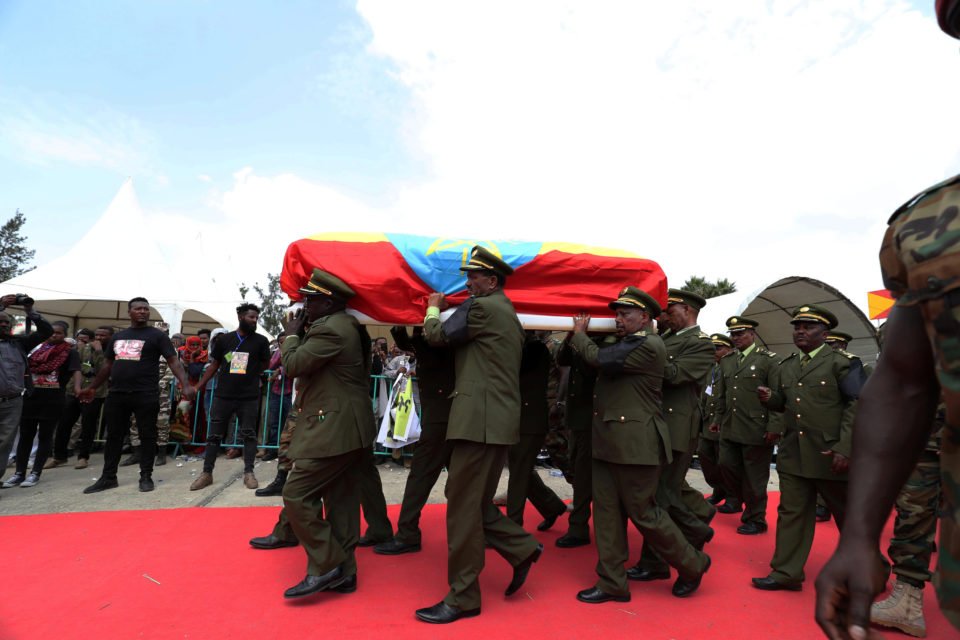 Ethiopian Army Generals carry the flag-draped coffin of Ethiopian Army Chief of Staff, Seare Mekonnen who was killed by his bodyguard, during his funeral ceremony on Wednesday

Dozens of people were killed in fighting during a foiled coup by a rogue state militia in Ethiopia’s Amhara region at the weekend, the regional government spokesman said on Wednesday, the first official report of significant clashes.

The militia attacked the police headquarters, ruling party headquarters and president’s office — where they executed three top officials – in Amhara’s regional capital of Bahir Dar on Saturday, Asemahagh Aseres told Reuters on the sidelines of a state burial for the officials who were killed.

The militia was a recently formed unit of the region’s security services. It had appealed for others to join its take-over were rebuffed, Asemahagh said.

“They are part of our police. They are not independent,” he told Reuters. “(But) most of the forces were not with them. They defended (us) very well.”

The fact that the militia were state forces rather than independent raises the stakes for the government of Prime Minister Abiy Ahmed, who has rolled out a package of economic and political reforms since taking office in April last year.

He has lifted a ban on political parties, released journalists, rebels and prisoners, and prosecuted officials accused of abuses. But his shake-up of the military and intelligence services has earned him powerful enemies.

His government is also struggling to contain discontent from Ethiopia’s myriad ethnic groups fighting the federal government and each other for greater influence and resources. Outbreaks of ethnic violence have displaced around 2.4 million people, according to the United Nations.

The spokesman said the militia had detained him when it took over a guesthouse for government officials and also tried and failed to take over the region’s state media. He said the militia were then chased out of the city.

A journalist confirmed to Reuters that militia members had approached, but withdrawn without firing at the media building’s armed security. Regional state-run media has reported 13 deaths in the violence so far.

Reuters could not independently verify Asemahagh’s death toll, but two independent witnesses Reuters interviewed in a coffeehouse the night before confirmed the militia attacked the three targets he named.

Details of more deaths in a separate but possibly linked attack in a neighbouring state also emerged on Wednesday.

Men in camouflage uniforms killed more than 50 people and injured 23 others in the Metakal zone of the Benishangul-Gumuz region early on Monday, the region’s peace and security bureau head Abera Bayeta told Reuters.

“We are still investigating but we have our suspicion that those attackers might be the same people who were involved in the coup in Amhara region,” he said.

The government has accused Amhara’s former security chief of masterminding the twin attacks that killed the region’s president Ambachew Mekonnen and two other officials in Bahir Dar, and the chief of staff and another general 500 miles away in the national capital Addis Ababa the same night.

Alleged coup mastermind Asamnew Tsige, who was shot dead by security forces on Monday, was accused of trying to seize control of Amhara, not the whole country.

But that was still a strike at the heart of Ethiopia’s political system – a federation stitched from a patchwork of ethnic groups and traditions.

Thousands lined the streets in Ethiopia’s two main northern cities on Wednesday in mourning. But within the crowds, many said they were not happy with the government.

In Bahir Dar, capital of Amhara, priests from Ethiopia’s Orthodox church gave sermons calling for forgiveness as the bodies of officials were laid out at the presidential house.

Three flower-covered black hearses carrying the state president, his adviser and the state’s attorney general wound their way through the streets accompanied by traditional flute music before being buried with military salutes.

Snipers stood on roofs and federal and regional security services mixed with the crowds in a show of strength. The prime minister’s wife, deputy and foreign minister, all of whom are from Amhara, attended the ceremony.

“I call for law and order to be restored,” Deputy Prime Minister Demeke Mekonnen told the crowd. “We should all reserve our emotions and respect the law.”

The night before the funerals in Bahir Dar, several young men told Reuters they supported Asamnew, whom they described as a defender of the Amhara people. They asked not to be named to avoid attention from the security forces.

“He (Asamnew) was creating a militia because the region was under attack. It was to protect us. People from Amhara are being killed everywhere,” one said.

In the neighbouring region of Tigray, thousands gathered in the capital Mekelle. Tigray was the home of the national army’s chief of staff, Seare Mekonnen, who was shot dead in Addis Ababa alongside another general from the region by his bodyguard late on Saturday.

“We will not be divided by ethnicities. We will be united,” said General Asrat Denero, the chief of the Ethiopian military’s western command centre.

But signs of the divisions were apparent away from the main ceremonies. Many in Tigray, whose citizens dominated the previous administration, have been angered by their loss of influence.

Some accused the government of being lax on security. Others in the crowd chanted “Abiy is a traitor” and “Abiy resign”.