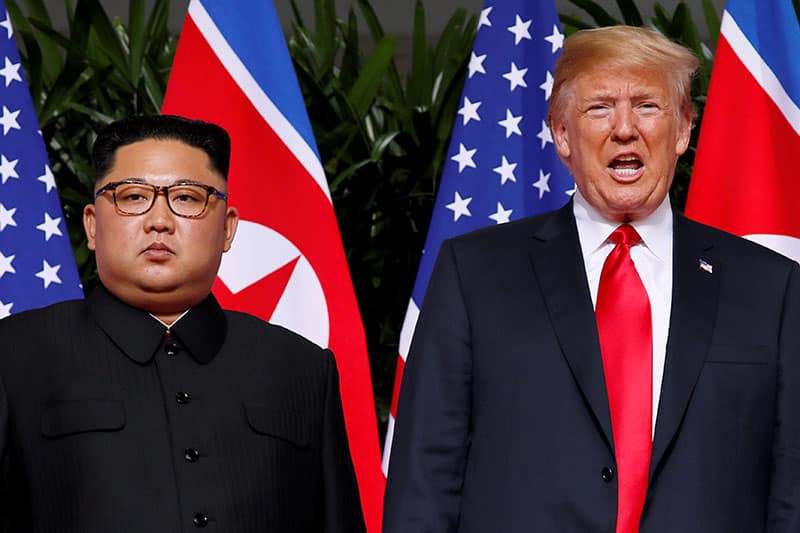 The United States is in behind-the-scenes talks with North Korea over a possible third summit and has proposed working-level negotiations that have been stalled since the second such meeting in February, South Korean President Moon Jae-in said on Wednesday.

Moon, in written answers to questions posed by visiting foreign journalists, said there was no reason to talk of a “stalemate” just because there had been no official dialogue, aimed at the denuclearisation of North Korea.

U.S. President Donald Trump and North Korean leader Kim Jong Un held their second meeting in the Vietnamese capital of Hanoi in February but failed to reach a deal due to differences between U.S. calls for denuclearisation and North Korean demands for relief from sanctions.

“Both sides have been engaged in dialogue in regard to a third summit,” Moon said.

“It’s noteworthy that the behind-the-scenes talks have been preceded by the mutual understanding of each other’s position gained through the Hanoi summit.”

The United States had made a proposal for working-level talks, Moon said, urging North Korea to return to the negotiating table “at the earliest date possible”.

Moon has been an ardent champion of efforts to end the confrontation, vowing to play a mediator role in nudging North Korea into giving up its nuclear weapons in exchange for an end to sanctions and security guarantees.

The Hanoi breakdown was a blow for Moon, who days before the summit offered to “ease the burden” of the United States by providing concessions to the North through inter-Korean economic initiatives which he seeks to revive.

Moon did not specify when and how the U.S. proposal was made. But U.S. Secretary of State Mike Pompeo said on Sunday that a recent exchange of letters between Trump and Kim boosted hopes for a restart of talks, calling it a “very real possibility.”

North Korea’s official KCNA news agency said on Sunday that Trump’s letter had “excellent content” and Kim would “seriously contemplate” it, without elaborating.

Stephen Biegun, the U.S. special envoy for North Korea who led working-level talks ahead of the Hanoi summit, is visiting Seoul from Thursday for meetings with South Korean officials before joining Trump, who is due in South Korea this weekend.

Trump is considering visiting the demilitarized zone separating the two Koreas, where Kim and Moon had their historic first summit last year, a South Korean official said. The two Koreas are technically still at war after their 1950-53 conflict ended in a truce, not a treaty.

But a U.S. official said on Tuesday that Trump had no plans to meet Kim during his trip and declined to comment on whether Trump would go to the DMZ.

Trump wanted to travel to the DMZ on a 2017 visit to South Korea but heavy fog prevented it.

“The resumption of negotiations between North Korea and the United States will take it to the next level. I believe everything has now fallen into place for that to happen,” Moon said.

The Hanoi summit cast doubt on Kim’s commitment to denuclearise. There has been little progress since then, with Pyongyang resuming some limited testing of weapons and being aloof toward dialogue offers both from Washington and Seoul.

There is also a grey area over talk about denuclearisation of the “Korean peninsula”, which, by North Korea’s reckoning, includes the regional U.S. nuclear umbrella protecting Japan and South Korea. The United States only wants North Korea to denuclearise.

Moon said Kim had told him he wanted to “finalise a denuclearisation process as soon as possible and to concentrate on economic development”.

Moon called for the North to scrap the “passive stance” it has presented since the Hanoi summit and take action on its past promises.

“By responding to the U.S. proposal for working-level negotiations, it can also show its determination to denuclearise,” he said.

The questions for the written interview were provided by Reuters, AP, AFP, Yonhap, Kyodo, Xinhua and Tass ahead of a symposium on the Korea peace process hosted by Yonhap in Seoul on Thursday.