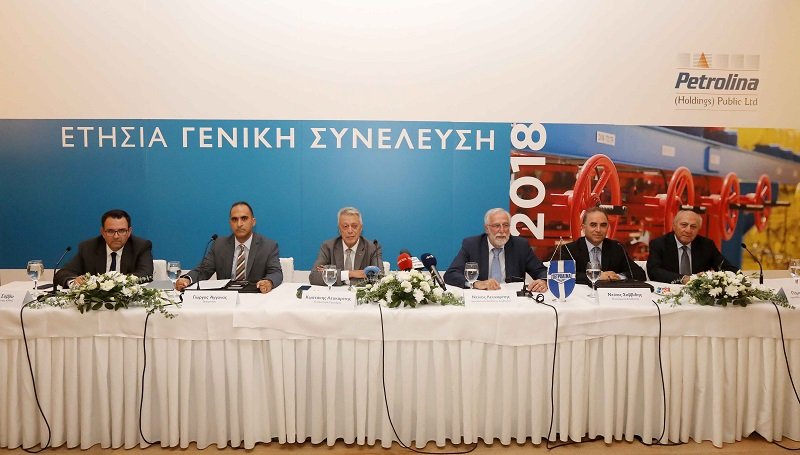 At the 19th Annual General Meeting of the shareholders of Petrolina (Holdings) Public Ltd, held on Wednesday, June 26, 2019, a profit before tax of €4,9m was announced, compared to €4,8m in the previous year, whereas after-tax profit for the year from continuing operations reached €4,3m, compared to €4,2m in 2017. The profit for the year, including returns from discontinued operations, reached €14,3m compared to €4,2m the year before and resulted from the sale of a 35% ownership stake in the subsidiary Lca Aviation Fueling System Limited, in line with the requirements of IFRS 10 “Consolidated Financial Statements”, and, in particular, the reclassification of LAFS from subsidiary to associated company.

At the AGM, the consolidated results for 2018 were presented to the shareholders of the Company. According to the Annual Report for 2018, total sales through petrol stations, to commercial clients and to other petrol companies reached €394,2m, compared to €391,5m in 2017. Based on the results, earnings per share from continuing operations is calculated at 4,90 cents, compared to 4,80 cents in 2017 and at 16,33 cents after including the discontinued operations, compared to 4,72 cents the year before.

The Company’s dividend policy remains stable. The Board of Directors proceeded with the distribution of an initial interim dividend of 1,7 cents in June 2018 and a second interim dividend, also at 1,7 cents, in November 2018, while the AGM approved the Board of Director’s proposal to distribute a final dividend of 2,5 cents, bringing the total dividend for 2018 at 5,9 cents per share, or 17,35% on the nominal share value.

In his address, the Executive Chairman Mr. Costakis Lefkaritis highlighted that “Petrolina has always invested substantial resources to infrastructure projects, which we believe offer our Company a comparative business advantage. Today, the completion of the 2nd phase of our own fuel terminal at Vasiliko has entered the final phase, the full operation of which is scheduled within the timeframe set by the Government, that is, by the end of this year.”

He added that all procedures are proceeding for the construction of a liquid petroleum gas terminal, also at Vasiliko, through a consortium, which aims to be operational by the end of next year, also in line with the Government’s timeframe.

Mr. Lefkaritis noted that, with the relocation of oil and gas storage operations to Vasiliko, the Company will proceed to dismantle its existing facilities along Larnaca’s shoreline, demolishing its tanks and cleaning the land. “Our goal,” he said, “is for the Company-owned land plots hosting our Company’s terminals in Larnaca to be included in new town-planning zones so that they can be developed accordingly. To this end, we look forward to the State’s positive response. Of course, the Company will continue to be based in Larnaca.” At the same time, Mr. Lefkaritis noted that the Company’s petrol stations’ network is continuously upgraded to European standards on safety, functionality and appearance, in order to offer consumers the appropriate environment.

Mr. Lefkaritis extended warm thanks to the members of the Board of Directors, the Management, petrol station owners, the staff, auditors, legal consultants, as well as the Company’s shareholders, for their trust.

The Annual Report of 2017 can be found on Petrolina’s website www.petrolina.com.cy

Weaning US power sector off fossil fuels would cost between $4.7tn and $10tn

Worst of yellow vest economic impact in France yet to come

Alphamega RUN AS ONE charity event returns on October 23