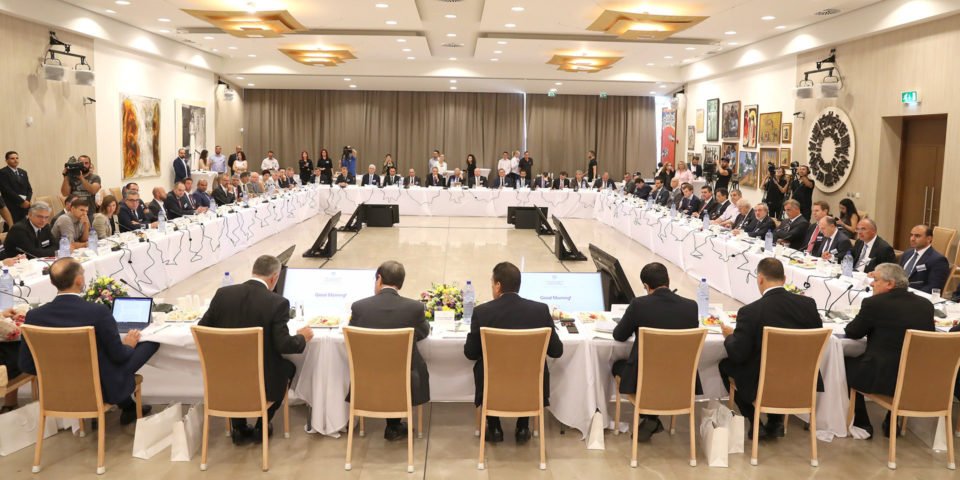 President Nicos Anastasiades and lawmakers on Thursday discussed the economy with prominent foreign investors, and possible measures for its improvement, during a round-table discussion at the presidential palace.

Such a dialogue would from now on be institutionalised, he said.

Addressing participants, Anastasiades said: “We expect to hear and evaluate your take on how the general business environment and competition could be improved, and how business endeavours could be simplified, particularly in the very important sectors which you represent such as finance, communication technology, energy, land development, entertainment, shipping, trade, and infrastructure.”

Anastasiades noted that the dialogue would also incorporate the input of foreign investors active in other sectors of the economy.

“It is paramount ensure that every investor trusts the economic environment in which he operates, through maintaining a stable, transparent, credible and competitive tax and legal regime, adopt measures, including structural reforms, which facilitate economic and investment opportunities and receive suggestions on issues which relate to the above-mentioned, as well as on further advancing the competitiveness of our country,” he said.

He said this forms part of  the state’s principles that it is only through a constructive dialogue, an exchange of views and ideas with all social partners, and in particular with highly – successful foreign investors and private companies, that the government would be able to adopt new policies or measures which would reinforce the outlook and prospect of the economic environment”
“This is all the more applicable in your case, since you do not only have a first-hand experience of Cyprus’ economic and business environment, but it is also through your initiatives and your multi-million investments that you have proved to be one of the most important components of the economic recovery, the growth and the job creation we are witnessing,” Anastasiades added.

Private sector investments have been crucial for the economic recovery, for the establishment of cooperation between the private and public sector, and for the enhancement of the role of the island as stable and competitive business destination, Anastasiades said.

He also highlighted that the event was an important pillar of “our overall framework of actions to preserve and explore the conditions in which high growth rates can be created”.

Participants of the discussion which lasted some two hours were also the ministers of foreign affairs, finance, and energy, the deputy ministers of shipping and tourism, and the government spokesperson.

The round-table discussion centred on topics including the transparency, credibility and competitiveness of the local economic environment, possible measures that could facilitate economic and investment opportunities and suggestions on ways to promote the country’s competitiveness.

Accident at Glencore mine kills at least 39 in Congo