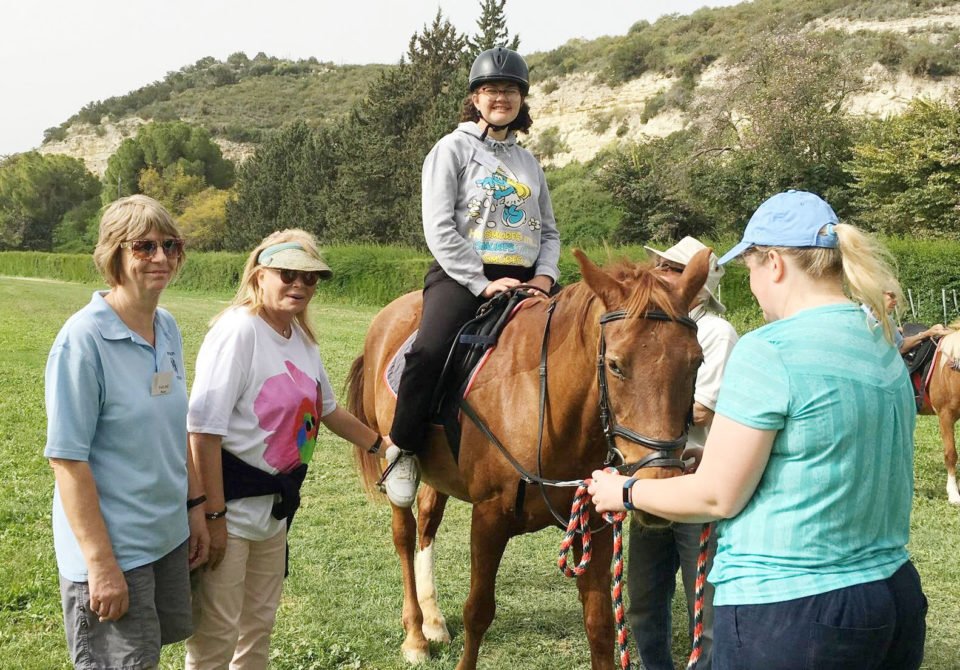 The RDA, which is based at Episkopi Saddle Club, offers weekly horseriding lessons for physically and mentally disabled people aged between three and 50. It was set up in 1985 after studies showed that people with disabilities can relax more and adopt a more balanced posture when mounted on a horse

Organisers have confirmed that last week’s annual Riding for the Disabled Moonlight Picnic at Flagstaff House in Episkopi has broken all previous fundraising efforts after an incredible €5,341 was raised for the charity.

The Moonlight Picnic, now in its 14th year, saw 120 people attend the Midsummer Night’s Dream-themed evening, which is the most-important fundraising event for the RDA – a non-profit voluntary organisation that relies entirely of donations and fundraising.

The RDA, which is based at Episkopi Saddle Club, offers weekly horseriding lessons for physically and mentally disabled people aged between three and 50 and it was set up in 1985 after studies showed that people with disabilities can relax more and adopt a more balanced posture when mounted on a horse.

Janet Howarth, the Chief Fundraiser for the RDA in Episkopi, explained her thoughts behind the Moonlight Picnic and revealed why riding a horse is so beneficial.

She said: “The event took place on June 20 and is part of our main fundraising efforts for the RDA. We chose the theme of Midsummer Night’s Dream because June 21 was the longest day of the year and we were thrilled to see so many people attend and we even had a table of 10 community leaders from within the Sovereign Base Areas, which was great to see.

“We work with children who could have autism and various other conditions and if you take a person in a wheelchair for example, who has limited mobility, on horse, they are upright, supporting themselves and they have a sense of height due to the size of the horse and they get really excited.”

And reflecting on the record-breaking amount of money raised this year in comparison to those previous and what will happen next, she continued; “We raised €5,341 euros on the night and last year it was €4,200, so this is officially the highest amount of money we have raised in our history.

“We will be using the money for feed, the FARIA and we will also be putting it towards new ponies, which will have cost us €12,000.”
Like all people at the RDA, Janet is a volunteer and has become involved with the charity because of the joy she feels it brings to those being given the opportunity to get involved.

Sharing her insight into why she decided to volunteer herself, she said: “I am inspired to volunteer because when you go down on a Thursday and see the looks of excitement and joy that the RDA generates for children that you know have limited mobility, it makes you feel really proud that you have achieved something and especially in giving something back to Cypriot children.

“The charities we work with are from the Republic of Cyprus and they tend to come from the Limassol area, like the St Lucas School, the Theotokos Foundation, the day care centre in Ypsonas, the Red Cross and the Autism Society.
“On Tuesdays we also take children from the Bases if they have a problem and are eligible to come down.”

Chairperson for the RDA, Wendi Quinn, was equally delighted with this year’s record-breaking efforts and she was quick to thank everyone involved in making the night such a great success.

She said: “What a fantastic Moonlight Picnic that was and I want to say thank you so very much to all involved in the organising of it. Thank you for coming and giving so generously.

“We are completely self-funded and this money can now be used to look after our horses and it will enable us to continue helping those people with disabilities that get so much out of the RDA.”

Mercedes seek to equal record 11 wins in a row