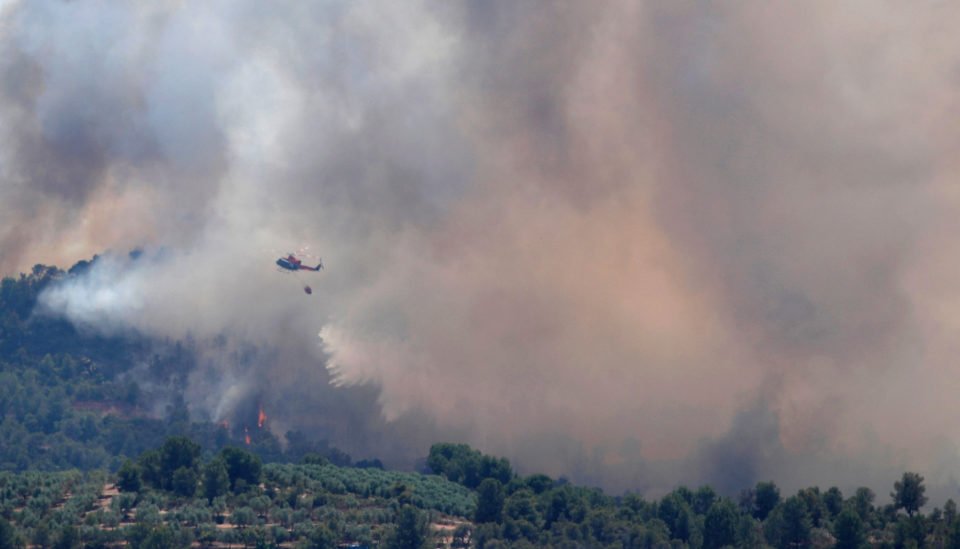 TARRAGONA, Spain/PARIS, June 27 (Reuters) – Wildfires raged across Catalonia and French authorities stepped up restrictions on water use and driving in cities as swathes of western Europe remained in the grip of an intense heatwave.

Temperatures climbed towards 44 degrees Celsius (111 degrees Fahrenheit) in parts of northern Spain and southern France, driving many people to seek relief in the sea, rivers, lakes, fountains and swimming pools.

Spanish firefighters struggled to douse wildfires across more than 16,000 acres (6,500 hectares) in the northeastern region of Catalonia, and said the affected area could increase as much as fivefold because of the fierce heat and winds.

Helicopters dumped water on the fires, which raged some 80 km (50 miles) inland from the coastal town of Tarragona. There were no reports of casualties, but the regional government said some 45 people had been evacuated from farmhouses in the area.

The wildfires are among the worst Catalonia has seen in 20 years, the regional government said, and residents were warned to stay inside to avoid inhaling smoke.

In neighbouring France to the north, authorities extended restrictions on vehicles, already imposed in Paris and Lyon, to Marseille and Strasbourg in an effort to curb air pollution.

Paris banned more than half of the cars – generally older, dirtier models – registered in the capital region, which has nearly six million inhabitants, while the heatwave lasts. Several cities reduced speed limits to reduce car emissions.

Some schools postponed summer examinations, and parts of northern France were put on drought alert, with water supplies to businesses, farmers and ordinary residents restricted. Agriculture Minister Didier Guillaume announced a ban on the transportation of animals until the heatwave has ended.

Grid operator RTE said French electricity demand on Thursday was close to a summer record seen two years ago, as people turned on fans and coolers to full blast for relief from the scorching temperatures.

“Calls to the emergency services are on the rise nationwide. We are seeing the beginning of a clear impact of the heatwave. For us the worst is still to come,” said Jerome Saloman, head of national public health.

Health Minister Agnes Buzyn said four administrative regions in the south had been placed on red alert, the highest crisis level, with 76 others on orange alert.

“This episode of heatwave is unprecedented in France. It is exceptional in its intensity,” she told a news conference.

The red alert would mean school outings and outdoor sport and other festive activities are suspended or postponed. She cautioned joggers and other sport lovers to curb their activities.

There was at least relief for northern Germany on Thursday as temperatures slid to more normal levels for June. In Berlin it was 21 degrees Celsius, down from around 37 on Wednesday.