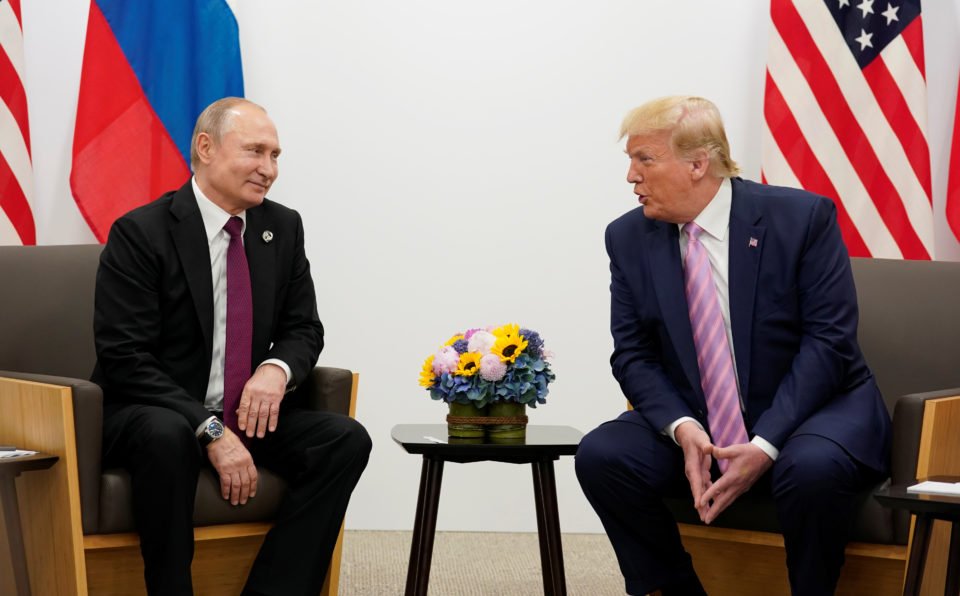 President Donald Trump on Friday sardonically asked his Russian counterpart to please not meddle in US elections, appearing to make light of a scandal that led to an investigation of his campaign’s contact with the Kremlin during 2016 elections.

A two-year investigation into a Moscow-run influence campaign during the election has hung over Trump‘s presidency, frustrating the Republican president who has said he seeks better relations with Russia.

Trump and Russian President Vladimir Putin were speaking to reporters in Osaka, Japan, ahead of their first formal face-to-face meeting since a controversial high-profile summit in Helsinki last July.

Asked by reporters whether he would raise the issue during their meeting, held on the sidelines of a Group of 20 (G20) summit, Trump said: “Yes, of course I will,” drawing a laugh from Putin.

Trump then turned to Putin to give the directive twice, as he pointed a finger at the Russian leader.

Trump‘s critics have accused him of being too friendly with Putin and castigated him for failing to publicly confront the Russian leader in Helsinki after US intelligence agencies concluded that Russian operatives had hacked into Democratic Party computers and used fake social media accounts to attack his opponent, Democratic candidate Hillary Clinton.

A US special counsel, Robert Mueller, spent two years investigating whether there were any ties between Trump‘s campaign and Moscow.

Mueller found that Russia did meddle in the election but found no evidence that the Trump campaign illegally conspired with it to influence the vote.

Relations between the two countries have been sour for years, worsening after Russia annexed Crimea from Ukraine in 2014 and backed Syrian President Bashar al-Assad in the Syrian war.

In a recent television interview, Putin said that relations between Moscow and Washington were “getting worse and worse.”

Trump has sought to turn the page to work with Putin on issues such as reining in North Korea’s nuclear ambitions. On Friday, he emphasised the positive.

“It’s a great honour to be with President Putin,” he told reporters. “We have many things to discuss, including trade and including some disarmament.”

Trump and Putin had been scheduled to meet at the end of November at the last G20 in Buenos Aires, but Trump cancelled the meeting as he flew to Argentina, citing Russia’s seizure of Ukrainian navy ships and sailors. The two spoke informally at the event, and at a lunch in Paris earlier that month.

In May, they had their first extensive phone conversation in months.Trump said they talked about a new accord to limit nuclear arms that could eventually include China.

“We’ve had great meetings. We’ve had a very, very good relationship,” Trump said on Friday. “And we look forward to spending some very good time together. A lot of very positive things going to come out of the relationship.”

In a further attempt to lighten the mood, Trump sought common ground with Putin at the expense of the journalists gathered to catch the leaders at the outset of their meeting.

“Get rid of them. Fake news is a great term, isn’t it. You don’t have this problem in Russia but we do,” Trump said.

To which Putin responded, in English: “We also have. It’s the same.”

The President has missed his chance