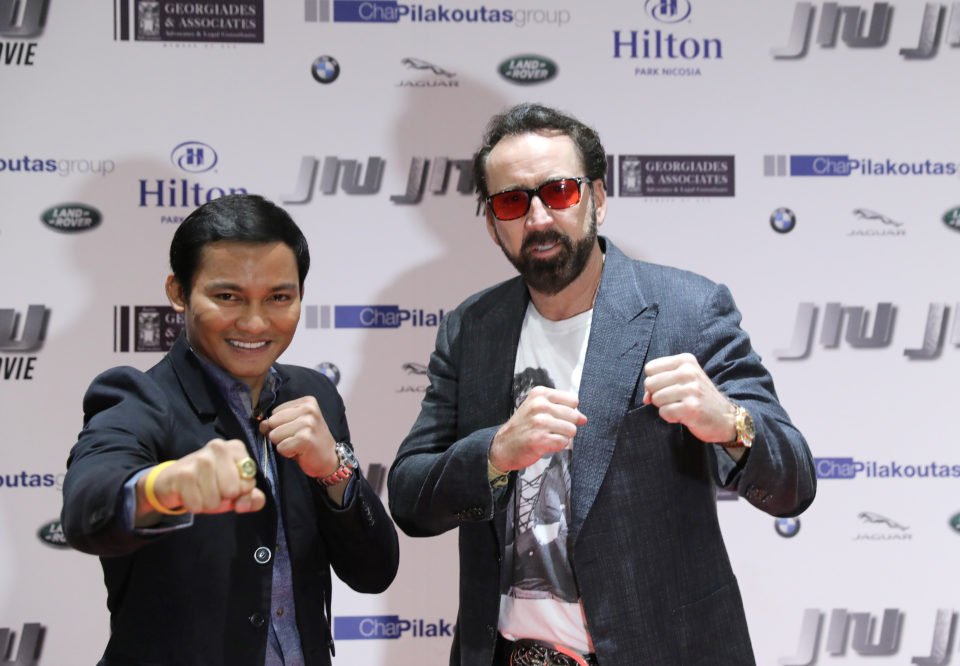 Nicolas Cage, the star name in Jiu Jitsu, was also the star of the press conference given by the film’s main cast and production team on Saturday evening – though he also ended up being upstaged, both by co-star Tony Jaa and the film’s producers.

“This motion picture is a test case,” said producer Martin Barab to a packed conference room at the Hilton Park in Nicosia. “I have six more movies behind this one,” he added, citing stars like Gerard Butler, Bruce Willis and Keanu Reeves. “These are $50 million movies.”

However, added Barab, none of those other films would be coming to Cyprus – drawn by the cash-rebate programme and other tax incentives recently introduced by Invest Cyprus – “until the government honours the certificate that induced us to come here” with Jiu Jitsu.

Asked by the Cyprus Mail later if he meant to imply any doubt in his mind that the government would honour the certificate, Barab was firm: “Absolutely not,” he replied. “I wouldn’t be here if I thought so.”

Nonetheless, all three producers – the others being Dimitri Logothetis (who is also the film’s director) and Chris Economides – struck a cautionary note.

“People are watching us, to see how this is going to fly,” warned Economides, the ‘people’ in question being producers of other Hollywood films. “Should [the scheme] fail, it’d be impossible to revive it,” added Barab, warning that the incentives had to be shown to be working as advertised.

Barab also pointed to flaws in the relevant regulations, including the requirement that a film had to be shot entirely in Cyprus in order to be eligible, which, he said, misunderstood the way films are made and limited producers unnecessarily.

Responding to the producers’ warnings, Michalis Michael, the chairman of Invest Cyprus – who was also on the panel – intervened to assure the production team “that we will stand by them”. Director Logothetis agreed that “everybody wants to make this happen”, and expressed optimism that any problems would be overcome.

All this took place towards the end of the press conference, when the actors – and, it must be said, much of the press corps – had already gone. Cage, who’s completed his scenes on the movie and is flying out today, seemed in good spirits, wearing red sunglasses, a grey jacket and a white T-shirt paying homage to Bruce Lee, in keeping with the film’s title – even though Jiu Jitsu is as much science fiction as martial-arts.

Cage, as expected, got the lion’s share of press attention. Producer Barab cautioned reporters that no questions “regarding personal life” would be permitted, but he needn’t have worried. The questions were respectful, and the Oscar-winning star – the only actor on the panel whose name-tag didn’t feel the need to specify ‘Actor’ – answered them with ease.

“I’m always looking for the ‘genius loci’ of a place,” replied Cage when asked about his experience of Cyprus. “Cyprus has been a good spirit for me.”

The actor spoke particularly of a day off when he went “up the mountain”, hiked around for a while and ate a meal of clay-cooked lamb (presumably kleftiko) in a taverna – an experience he found “quite romantic, quite poetic”. Asked to describe our island in just one word, the other actors said “Hot!”, but Cage was more high-minded: “Mythic,” he replied. Unsurprisingly, he expressed a wish to come back someday.

Cage was flanked by four fellow cast members: Frank Grillo (recently seen in Avengers: Endgame), Alain Moussi, Juju Chan and Tony Jaa, the Thai martial-arts sensation who only answered one question but showed off the sense of drama that’s made him even bigger than Cage among action fans, especially in Asian markets.

Asked about rumours that he might be playing Bruce Lee in an upcoming biopic, Jaa began speaking very softly about Lee’s influence on his life – then suddenly leaned into the mike and did an impression of Lee’s karate shout, yelling “Aaah-ohhhh!” at the top of his voice. The reporters all jumped, then laughed and applauded.

The cast then departed, leading to a bit of a scrum as reporters pressed in closer trying to take selfies with the various actors while Jaa himself took a selfie with Cage and Grillo.

The shoot is now at its halfway point, and will continue (without Cage) for the next few weeks.