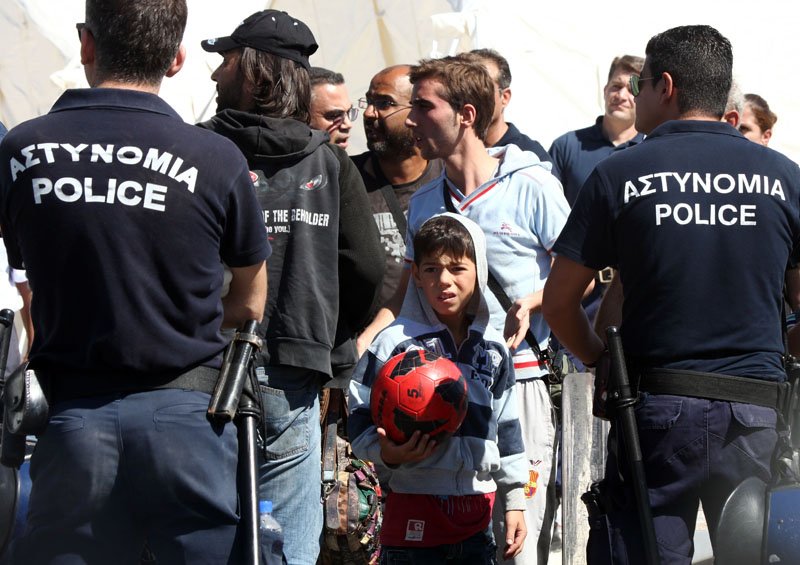 Cyprus is seeking individual relocation agreements with EU countries as a way of dealing with the large influx of asylum seekers, many of them arriving via northern Cyprus, which authorities suspect takes place with Ankara’s implicit approval.

Interior Minister Constantinos Petrides, who travelled to Brussels this week to make Cyprus’ case, did not rule out that the recent influx could be related to the impasse in the Cyprus problem and the tension over natural gas with Turkey.

According to ministry figures, there has been a spike in migrant arrivals from the north of the island, either through the crossings or other points along the buffer zone.

During a news conference in Brussels, the minister was asked by Euractiv on whether the significant increase could be linked to the current state of affairs and if he thought Ankara was trying to blackmail Cyprus.

“This new method of sending refugees by planes and buses could not be carried out without at least the tolerance of the [Turkish] authorities. And it’s not just tolerance. I mentioned the practices regarding the visa-free regime, regarding these policies which encourage this phenomenon to happen. It’s very clear that here we have an institutional kind of smuggling,” said Petrides.

The minister added that Turkey “could be” trying to blackmail Cyprus.

The minister said Turkey’s visa-free regime with many countries in Africa and Asia allowed migrants and asylum seekers to reach northern Cyprus without restrictions. He said that among those nationalities were Syrians, Iranians, Pakistanis, Nigerians and Cameroonian nationals whose numbers have shown a marked increase in 2019.

“There are signs that people who were in Turkey for years have ended up in Cyprus. It doesn’t appear to be a coincidence,” he told the Sunday Mail.

In 2016, in return for billions of euros, Turkey agreed to take back any irregular migrants crossing into EU soil.

But Petrides said that agreement is not applied when it comes to Cyprus, which appears to be turning into a new migratory route in recent months.

Cyprus has repeatedly called for solidarity but no relocation programme has been put in place. Financial assistance does not help in resolving the problem.

Petrides told the Mail that he was working with other countries on putting in place an ad-hoc relocation programme but even with this, the problem would not be solved.

The minister did not disclose the names of the countries but according to Euractiv, these were small and could not take large numbers of asylum seekers.

Turkish Cypriot authorities in the north introduced visa requirements for Syrian nationals on June 21 due to the continuously increasing number of arrivals at Tympou (Ercan) airport over the past months.

Before that, it was possible to enter the north by obtaining a visitor’s visa at the airport.

However, according to the UNHCR, the general practice for persons arriving in the northern part of Cyprus and claiming to be “in need of international protection is that they are immediately detained without proper access to asylum and then placed under deportation procedures.”

Due to the lack of access to asylum there, most people who claim to be in need of international protection therefore seek asylum in the areas controlled by the Republic.

The persons identified by UNHCR’s NGO implementing partner in the north as being in need of international protection, are typically Syrian nationals.

They include unaccompanied children and women with small children wishing to reunite with relatives residing in Cyprus, as well as young men and boys who fear forced recruitment into the armed forces.

The overwhelming majority of the Syrians residing in Cyprus are beneficiaries of subsidiary protection who are not entitled to family reunification.

“It is crucial that states do all they can to enable refugee families to be together. UNHCR reiterates that people with subsidiary protection or other forms of complementary protection are afforded the same rights to family reunification as refugees,” the UNHCR said in a statement.

As a result of the increased arrivals and backlog in processing asylum claims, the reception capacity is overstretched, UNHCR says.

The island’s only reception centre is operating at full capacity as are shelters for the unaccompanied and separated children.

“The vast majority of asylum seekers are staying in the main cities and are at risk of destitution and homelessness. Integration prospects for those granted refugee status or subsidiary protection in Cyprus remain limited,” the organisation said.

“With some 7,000 persons afforded international protection in Cyprus since 2014, the need for greater assistance and support to help them integrate has become crucial.”

Apart from the irregular migrants arriving in boats or through the north, Cypriot authorities must also deal with a high number of asylum applications filed by third-country nationals who came on the island on student visas.

The problem, according to Petrides, is not negligible. Cyprus has put strict procedures in place in the countries of origin resulting in a high rejection rate.

Petrides said he has also asked the education ministry to be strict with colleges and tighten procedures to prevent abuse of the system.

One of the key problems that exacerbates the situation in Cyprus are the slow administrative and legal procedures, which span between three to five years.

According to the minimum standards for asylum procedures as set out in the EU Asylum Procedures Directive, the process should take six months, and up to a maximum of 18 months.

On average however, the administrative and judicial review process in Cyprus takes three to five years, UNHCR said, adding that it knows of cases that are still pending 10-12 years on from when the asylum claim was made.

Petrides hopes the issue will be resolved by the operation of the new international protection administrative court (IPAC) which began operating on June 18. The court, staffed with five judges, replaced the refugee reviewing authority which will disband after going through some 1,500 cases.

Its decisions will be final and UNCHR says that long as the necessary infrastructure is in place, and there is adequate expertise and the processes are managed efficiently, this should help reduce waiting periods since it would simplify the appeals procedure.

“The government of Cyprus has taken significant steps to address the needs of the increased numbers of asylum-seekers on the island, including by expanding the labour market sectors; reviewing the level of assistance provided to asylum seekers, and drafting an integration strategy for the coming years,” UNHCR said.

Our View: Practical measures needed to stop abuse of Gesy

Tales from the Coffeeshop:  Torn between two lovers, feeling like a fool