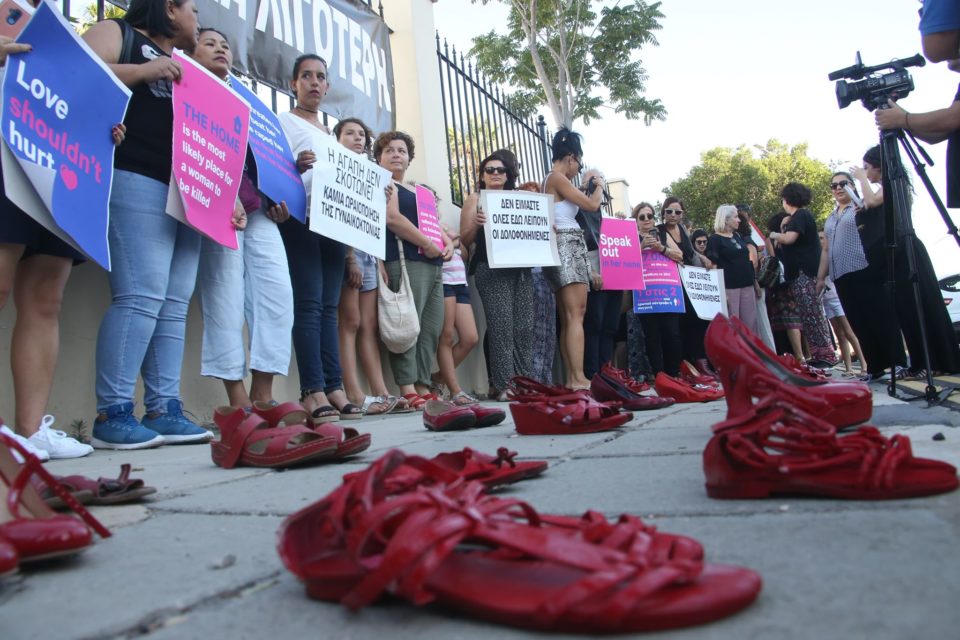 Hundreds of women, men, and women’s groups gathered outside the police headquarters on Tuesday afternoon to protest violence against women and the recent murders committed by serial killer Nicolas Metaxas and that of Sophia Zenonos by her ex-boyfriend.

Thirty-seven red shoes and bags were placed on the pavement where protesters stood holding signs to represent the women that have been lost to domestic violence in Cyprus since 2000.

“Police play an important role in the prevention of women’s murders, and they need to take on the responsibility,” Tonia Stavrinou, one of the organisers, said.

“Those who cannot do their jobs will go home,” chief of police Kypros Michaelides said after the demo. He said he is determined to take action to clean up the police and “not to lose lives by police failures and mistakes”.

The protest called Not One Less was organised following the murder of Zenonos, 26, on Saturday.

“Police are on the first line of response in a rape, beating, or other abuse case and the way that they handle it could be crucial in how the case unfolds,” Stavrinou said.

Commenting on the recent murders by Metaxas, Stavrinou said the police’s stance could play a decisive role on whether or not a woman lives or dies.

“Usually women’s murders by a former or current partner are the result of long-term abuse, which climaxes, and unfortunately many of these women file complaints with police repeatedly, and they were unable to protect them [the women].”

She added that the police have systematically failed to respond and protect the victims, and that the authorities are not taking on the role they should have in bringing justice.

Police spokesman Christos Andreou said the police stand by vulnerable groups of people, such as women and children.

“We understand the concern of the people and especially the women that are taking part in the demonstration. We agree with the fact that ending domestic violence needs to be a priority of the authorities, including police,” he said.

Zenonos was killed by her ex-partner after she went to a firing range in Ayia Fyla to reportedly prevent him from taking his own life. When she arrived, police said there was a disagreement between the two and that he shot her, and afterwards ended his own life.

Almost three months ago the body of the first of seven victims killed by Nicolas Metaxas was discovered in a mine shaft in Mitsero, after being reported missing in 2018. Following the recovery of all the victims bodies, some sunken in the red lake not far from the mine, and another in Memi lake in the same area, Metaxas was sentenced to seven life-sentences.

In the wake of the murders, the police chief was fired and the justice minister resigned amid criticism that police delayed to investigate the missing persons cases.