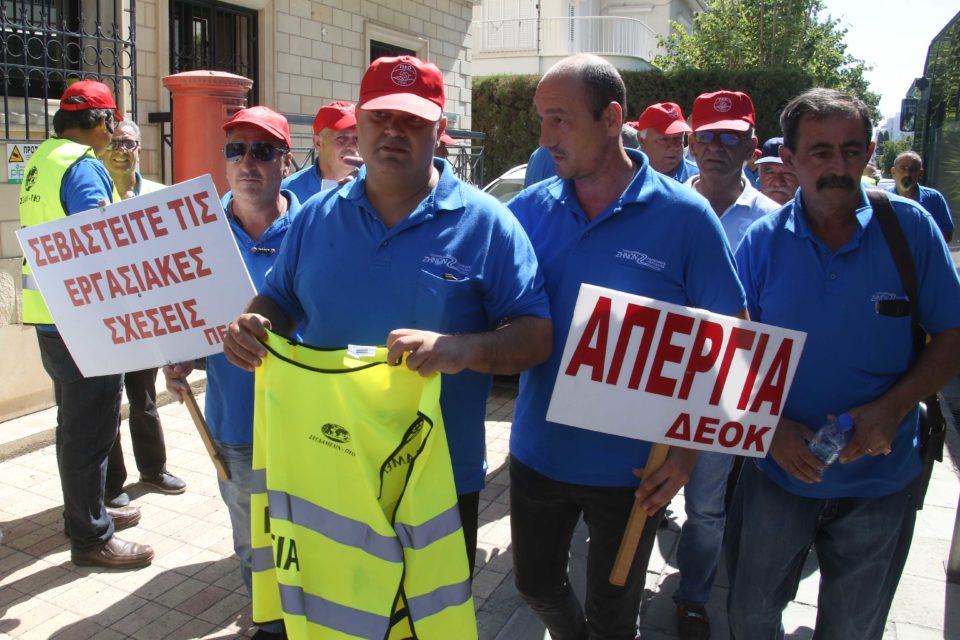 Striking bus drivers outside the transport ministry on Wednesday

The indefinite strike by Larnaca bus drivers continued for a second day on Wednesday without a definitive solution between the Zenon bus company and transport ministry over June salaries.

The striking bus drivers gathered outside the transport and labour ministries in Nicosia on Wednesday over the non-payment of their June salaries.

An agreement reached by the transport ministry and the company earlier in the year, after the latter often faced liquidity problems leading to numerous strikes by bus drivers, obliges the ministry to submit an agreed sum to pay salaries before the end of the month, as well as an additional agreed sum at a later stage to cover additional company costs.

“With the money we got from the ministry, creditors were paid to supply us with spare parts and repair the buses. Shareholders did not get any of the money. If we paid the drivers, there would be no buses for the employees to drive,” chairman of the Zenon board of directors Pantelis Pantelides said.

“There is no alternative, if they do not give us money, we cannot pay the workers,” Pantelides said.

Without a definitive solution to the company’s liquidity problem, the strike is set to continue on Thursday.

Representatives of the striking bus drivers have warned that they will consider escalating measures if by Thursday there is no positive development. They also said that they declined an offer by the company to pay half of their salary, with the other half to be submitted at a later stage.

In statements after her meeting with union reps, Transport Minister Vassiliki Anastasiadou said that the ministry had fully abided by its contractual obligation to submit to the company the amount to pay employee salaries.

“As is the case every month, the company received the sum, but did not use it to pay its employees, something which constitutes a criminal offence,” Anastasiadou asserted.

Even so, Anastasiadou said that the ministry is determined to find a solution to the problems at the Zenon bus company.

“We fully understand the situation that has been created for the employees, who are being victimised even though it is not their responsibility,” the minister added.

The position of the union reps, however, is that the responsibility of the transport ministry is not limited to submitting the sum for employee salaries.

Asked what the company will do if the ministry asks for the salaries of the employees to be paid in accordance with the signed contract, Pantelides said: “We are ready for everything, we know about the criminal offence and we are ready to for anything, even go to prison.”

He challenged anyone to check the company’s books and send people to prison if they have been stealing, and said he personally guarantees there has been no abuse since 2012.

Pantelides also claimed the government had arbitrarily cut subsidies in recent years, creating a big problem for the company’s liquidity.

One year on, casino is ‘rewriting tourism’