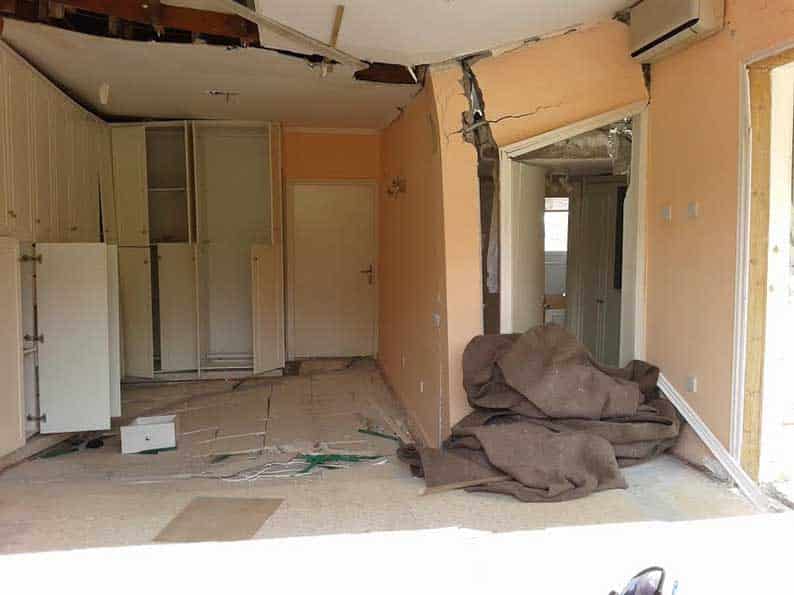 A destroyed bedroom in one of the houses

The ongoing plight of homeowners in Pissouri whose homes are crumbling due to a landslide featured in the UK press this week, in an extensive piece in the UK’s Daily Mail newspaper.

British journalist, George Odling, visited the stricken area in Pissouri village where 17 families have been evicted, and met with a number of affected homeowners.

The publication is one of the biggest selling newspapers in the UK and one of the most popular news websites in the world. The story is a blow for Cyprus’ image. ‘Sunshine dream in ruins: Dozens of Britons moved to Cyprus for a new life… Then landslides devastated their precious homes,’ reads the headline and subhead.

Odling noted that dozens of desperate families have pleaded with the government to help with their plight, to no avail. Dozens of photos graphically depicting the devastation of the hillside homes and gardens are online which show homes ripped apart, walls, gardens and pools collapsing and roads split, buckled and impassable.

In 2015 the then minister of the interior, Socratis Hasikos, said it was the government’s duty to intervene, but since his resignation in May 2017, no action has been taken

In April, the auditor-general Odysseas Michaelides announced that the government should not essentially assume responsibly and compensate as it would set a precedent.

No insurance company will insure against landslide damage and the properties were all built by different developers.

In June, the government pledged ad hoc financial assistance to residents, but stressed that this was not compensation. Interior minister Constandinos Petrides said that, at present, compensating homeowners was ruled out.

The government is funding a study to determine the causes of the problem with tenders closing on July 12.

However, Elina Zoi, the lawyer for a group of the homeowners, sent a letter to the Geological Survey Department, President Nicos Anastasiades and other authorities on Tuesday, regarding the potential danger from the land movement. She noted that after studying the relevant information, the foot of the landslide is moving far quicker than its head.

A geo-technical engineer said that this difference translates into a fault or void within the sliding area, which the head of the landslide will try to cover up. As the ground dries out after the wet winter there is a possibility of a huge sudden movement.

“I feel obliged to point out the danger to the life and safety of the residents and visitors of the area,” she said.

She told the Cyprus Mail on Wednesday that two of the potential bidders for the tender both have concerns.

“One is a leading worldwide company specialising in this field, the second a well reputed UK university. Both won’t bid in the tender as they say that the terms are not clear.”

Bidders are expected to provide alternative solutions and a cost estimate before they have enough time to conduct a proper survey of the landslide. They must also cover the cost of additional surveys, which goes against common practice. All of this means the terms of the tender very risky, she said.

Interested parties must also submit a bid in Greek only (also against common practice) and must have successfully completed a project of €1 million in the last five years or two projects of €800,000.

“No company in Cyprus fulfills these requirements and perhaps not in Greece either,” she said.