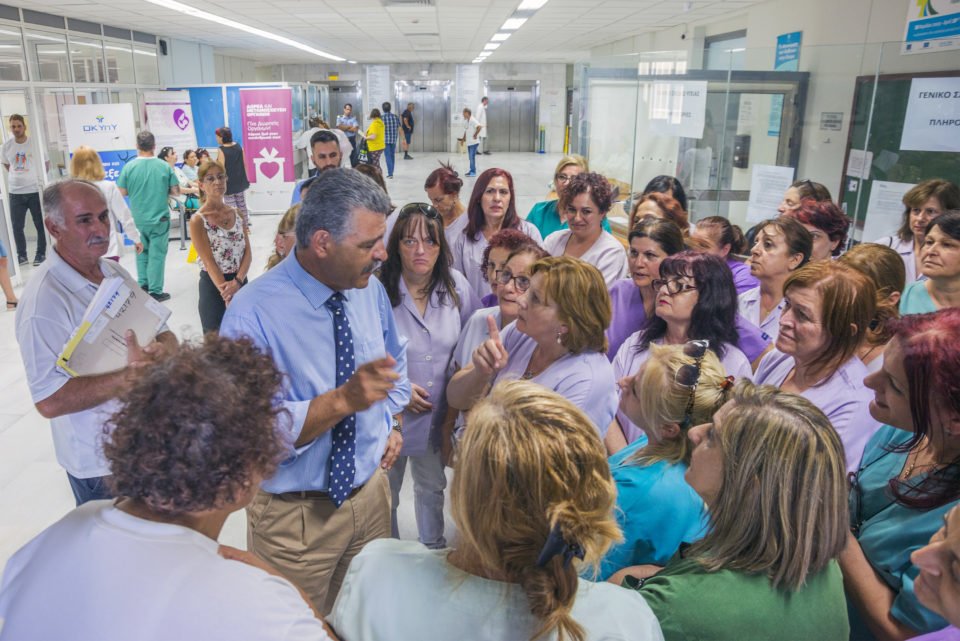 Around 150 hourly-paid workers at the Limassol general hospital went on strike Thursday morning citing acute understaffing issues but eventually went back to work after agreeing to give 10 days to the management to hire more staff.

The strike started at 6.30am and involved around 150 cleaners, surgery room messengers, room attendants and kitchen staff.

Room attendants were the last to end the strike, at around 5pm.

The staff demanded that vacancies are filled including hiring staff to fill in for colleagues on long-term sick leave so that they can meet their working schedules over the summer holiday period  and the days off owed to them for working on holidays. They also asked that messengers were hired to work irregular hours.

Their unions said on Thursday afternoon that workers had agreed to give a 10-day deadline so that more staff was hired.

Room attendants, who had to also perform messenger duties, were reassured that arrangements would be made so there were messengers on all shifts.

If the promises are not kept, workers will escalate measures, the unions said.

The strike was announced after workers reportedly turned down an offer by the management to hire four people, arguing they needed at least 20 cleaners and three room attendants.

Later on Thursday, Health Minister Constantinos Ioannou assigned responsibility for the frustrated hospital staff to the state health services (Okypy), which he said shows continuous worrying negligence in “the management and resolution of the problem which arose a few days ago among the staff of the Limassol general hospital”.

Striking staff that gathered outside the hospital told media that due to the serious understaffing problem, they had to work long hours and were unable to even take a day off.

“The work schedule cannot be met, either for holidays or shifts,” a cleaner said.

She gave as an example the case of a room attendant who was doing 12.5-hour night shifts and was forced to also perform messenger duties. ‘This is inhumane,” she said.

Another staff member said that it was already July and they were not able to take “not even a day off”.

“We have been working on holidays for the past three years but we have yet to receive our corresponding days off,” she said.

But according to Christos Nicolaou, Okypy executive director for the Limassol-Paphos district, the staff asked for two more cleaners to be able to do the summer holiday schedule but management offered to hire four.

He also said there was no delay in dealing with the issue. The proposal to hire four people was submitted on Wednesday noon, while meetings had taken place with unions twice, he said.

“Things should not have gone this far,” he told state broadcaster CyBC radio on Thursday morning.

He said the problem is that a number of staff members were on long sick leave, while when the summer holidays schedule was prepared, four more persons went on sick leave worsening the situation.

Nicolaou said he hoped that by the end of the week the four new people would be hired.

The head of the House health committee, Costas Constantinou, who was along with other MPs on a scheduled a visit to the hospital, expressed concern.  There might have been delays in dealing with the problems, he said, but “we were informed solutions were given to the problems for which the strike is taking place.”

Since the unions and workers were informed of the solutions, “why the strike today?” he asked.

Cyprus and UK urged to work together to fight illicit finance