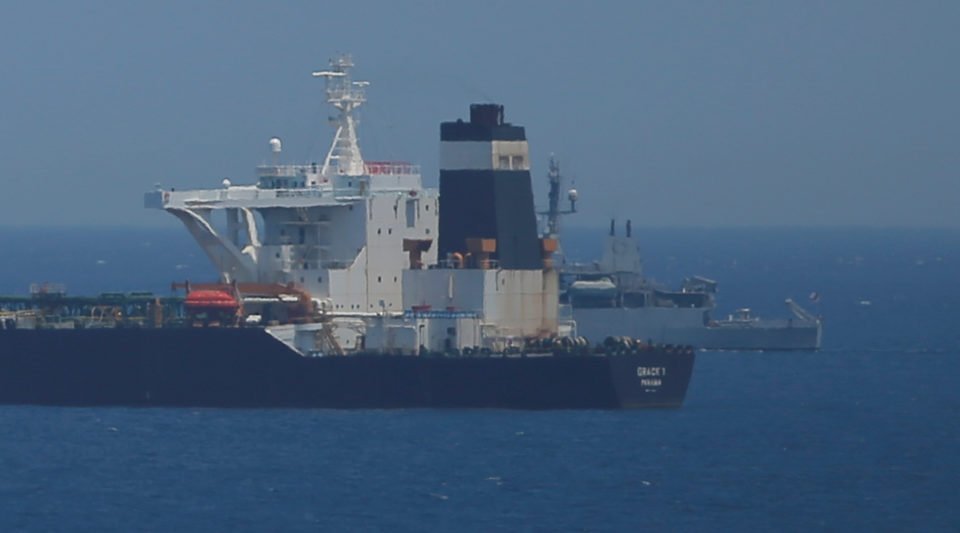 A British Royal Navy patrol vessel guards the oil supertanker Grace 1, that's on suspicion of carrying Iranian crude oil to Syria, as it sits anchored in waters of the British overseas territory of Gibraltar, historically claimed by Spain

An Iranian Revolutionary Guards commander threatened on Friday to seize a British ship in retaliation for the capture of an Iranian supertanker in Gibraltar by Royal Marines.

“If Britain does not release the Iranian oil tanker, it is the authorities’ duty to seize a British oil tanker,” Mohsen Rezai said on Twitter.

The Gibraltar government said the crew on board the supertanker Grace 1 were being interviewed as witnesses, not criminal suspects, in an effort to establish the nature of the cargo and its ultimate destination.

British Royal Marines abseiled onto the ship off the coast of the British territory on Thursday and seized it over accusations it was breaking sanctions by taking oil to Syria. They landed a helicopter on the moving vessel in pitch darkness.

The move escalates a confrontation between Iran and the West just weeks after the United States called off air strikes minutes before impact, and draws Washington’s close ally into a crisis in which European powers had striven to appear neutral.

Tehran summoned the British ambassador on Thursday to voice “its very strong objection to the illegal and unacceptable seizure” of its ship, a move that also eliminated doubt about the ownership of the vessel.

Foreign Ministry spokesman Abbas Mousavi said the crude oil cargo was from Iran. The ship’s paperwork had said the oil was from neighbouring Iraq, but tracking data reviewed by Reuters suggested it had loaded at an Iranian port.

European countries have walked a careful line since last year when the United States ignored their pleas and pulled out of a pact between Iran and world powers that gave Tehran access to global trade in return for curbs on its nuclear programme.

Over the past two months, Washington has sharply tightened sanctions against Tehran with the aim of halting its oil exports altogether. The moves have largely driven Iran from mainstream markets and forced it to find unconventional ways to sell crude.

The confrontation took on a military dimension in recent weeks, with Washington accusing Iran of attacking ships in the Gulf and Iran shooting down a U.S. drone. President Donald Trump ordered, then cancelled, retaliatory strikes.

With nuclear diplomacy at the heart of the crisis, Iran announced this week it had amassed more fissile material than allowed under its deal, and said it would purify uranium to a higher degree than permitted from July 7.

The Grace 1 was impounded in the British territory on the southern tip of Spain after sailing the long way around Africa from the Middle East to the mouth of the Mediterranean, a route that demonstrates the unusual steps Iran appears to be taking to try to keep some exports flowing.

While the European Union has not followed the United States in imposing broad sanctions against Iran, it has had measures in place since 2011 that prohibit sales of oil to Syria.

Gibraltar said on Thursday it had reasonable grounds to believe the Grace 1 was carrying crude oil to the Baniyas refinery in Syria. It made no mention of the ownership of the vessel or the origin of its cargo.

Shipping experts say it may have been avoiding the more direct route through the Suez Canal, where a big tanker would typically be required to unload part of its cargo into a pipeline to cross, potentially exposing it to seizure.

If officials in Gibraltar have not fully established the nature of the cargo or the final destination, they could in the coming days ask a court for permission to hold the vessel for longer.

Olivier Dorgans, an economic sanctions expert at Hughes Hubbard & Reed law firm in Paris, said the British move appeared intended to send a warning to the Iranians that if they pushed on with their nuclear breaches, European countries would act.

“This was done for political effect. The British are warning the Iranians,” he said.