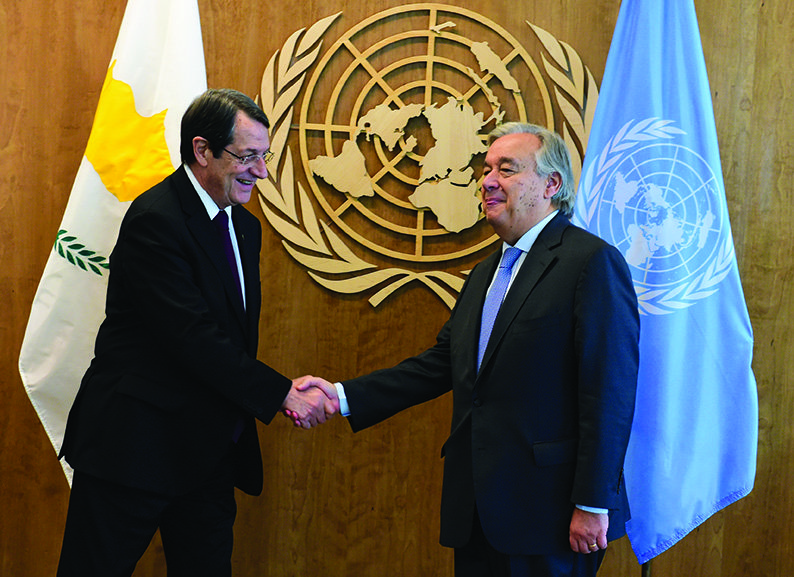 President Nicos Anastasiades has reiterated his will to resume reunification talks the soonest possible from the point they had been abandoned in Switzerland two years ago in a letter to the UN Secretary-General Antonio Guterres that was leaked on Friday.

In the June 14 letter published by Kathimerini, the president said he wished to share his concerns amid a difficult time created by Turkey, which violated the UN Charter and international law, undermining in turn prospects of peace and stability.

Anastasiades accused Turkey of escalating tension in the area by engaging in offensive moves inside the island’s exclusive economic zone thus hampering efforts towards the resumption of negotiations.

“I have repeatedly reiterated my commitment to the process and resuming the talks the soonest possible from the point where they were interrupted at the Conference in Crans-Montana,” the president said.

To that end, he said, he has been working constructively with the UNSG envoy Jane Holl Lute to strike a deal on the terms of reference of renewed talks.

“I am of the strong opinion that lack of agreement in the previous months should not discourage us, but strengthen our resolve and efforts to achieve reunification to the benefit of Greek Cypriots and Turkish Cypriots alike. There are no alternatives to the efforts for peaceful settlement of disputes and I think that this message is more relevant now than ever,” he said.

Nevertheless, Anastasiades added, the Republic was now confronted with Turkey’s aggression and “as I have already conveyed and I believe is understandable, Turkish actions gravely undermine the prospect of resumption of a meaningful negotiating process.”

On the substance of the problem, Anastasiades reiterated a number of proposals he had tabled aimed at “moving the process forward.”

Included in those proposals is the introduction of the idea of decentralised federation, whereas until that time the Greek Cypriot side insisted on a strong federal system of government.

“The idea is to adopt a different system of power for the federal executive and namely a Parliamentary System with a permanent ceremonial Greek Cypriot President and Turkish Cypriot vice president and a rotating 4:2 Prime Minister and Deputy Prime Minister who are to be elected by the House of Representatives,” he said.

Such a system would in fact bring the two communities and the political parties of both constituent states closer together, since there would be a need to forge ideological alliances irrespective of ethnicity, the president added.

Main opposition Akel said the letter confirmed the party’s fears that the president on one hand verbally supported the resumption of the talks but in practice he cancels this position with what he asks for.

Essentially, what the president says in his letter is that either have a meeting between him, the UN envoy and the Turkish Cypriot leader, or an informal conference, not to continue from where the talks had stopped, but to discuss the terms of reference and his new ideas, Akel said.

Party spokesman Stefanos Stefanou said the president’s so-called new ideas were not in line with the UNSG framework and consequently cancelled the convergences achieved during the talks.

The proposal for decentralised federation effectively meant renegotiation of the federal powers, which have been agreed whereas the idea for a parliamentary system reopened the issue of governance, which has also been agreed, the Akel spokesman said.

As was the president’s insistence to undo the agreement for one positive vote in the cabinet, he added.

“These positions are not only out of step with the framework, but they are also wrong,” Stefanou said. “The idea for a parliamentary system is bad in Cyprus’ conditions because it creates an immediate danger of continuous stalemates and elections and even failure to form a government,” Stefanou said.