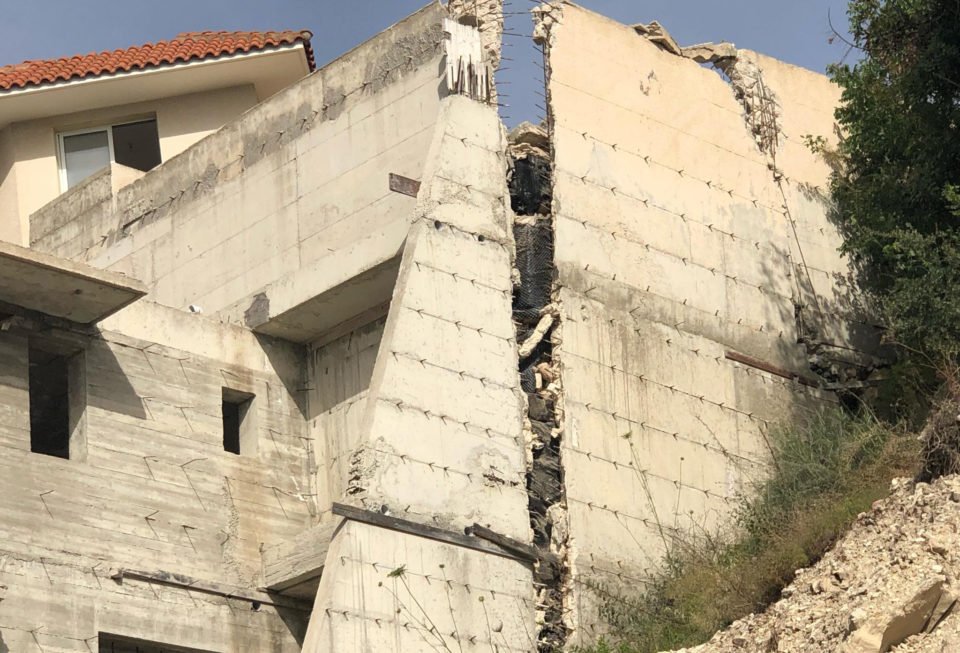 The walls of the complex have completely pulled apart

Angry homeowners in Tala village in Paphos have started a petition to demand the immediate demolition of the structurally dangerous, abandoned development that is sliding down a hillside and has forced the closure of a busy access road.

Residents were hoping for the immediate demolition of the residential complex following a recent supreme court decision that ordered the developer to demolish it within 60 days. The Paphos District Office also recently said that it would look at ways to bring it down sooner.

However, weeks later the complex remains standing, albeit tenuously, as homeowners told the Sunday Mail that huge cracks in the complex and road below are widening fast and buildings are tilting and splitting apart far quicker than before.

“There is a huge difference in the present condition of the collapsing buildings from just a couple of months ago and it is more visible now,” said a Kamares resident, Irina Yakimovitch.

“The structure is ripping apart. The road is sunken and it’s very dangerous even to walk there. It looks as if it can collapse at any time. I feel very sorry for homeowners, especially the elderly.”

The road closure means a lengthier and trickier route to both their homes and the town.

A local residents’ group has held three meetings regarding the complex so far, and is preparing a petition to the authorities which is being signed by residents of all nationalities.

They are demanding that all possible steps be taken to complete demolition of the complex and the road restored as quickly as possible. They also want to be informed of progress, expected completion and any changes to the timetable.

A spokesman for Paphos District Office confirmed to the Sunday Mail that they are proceeding with a tender to demolish the buildings and restore the hillside and road, which will cost an estimated 500,000 euros altogether.

“The court decision gave time until the end of this month (July) for the demolition, so we have decided to wait to see if the developer will comply and take any action and we also need this time for the tenders,” he said.

The demolition is expected to take around two months once it starts.

This can’t come too quickly for residents, as the main road from Tala to Koili, Zelemenos and Kamares village has been closed since April 6, due to the danger posed by the subsiding development. This means that local traffic must use narrow, winding roads through the middle of Tala and surrounding areas, which are not suitable for the volume of traffic.

The diversion is also leaving many people feeling isolated as they won’t chance driving, especially at night.

Residents are also concerned that poor access will delay the emergency response times of the emergency and private security services.

The diverted route, they said, is treacherous with numerous ‘blind corners’ and that it’s only a matter of time before a serious accident occurs. Traffic is congested with queues of vehicles having to try to reverse to let large trucks through.

“The road is still closed and it has caused big problems to all the residents of Kamares, Zelemenos and Koili,” Yakimovitch said. “It’s a huge inconvenience for my family as we have had to drive children to and from school and every day and the journey is twice as long, twice as costly and also uncomfortable.”

The roads used for the diversion have no road markings, steep sides, dangerous edges, no pedestrian pathways on either side, and the trip is sometimes hair raising, she said.

Residents said they are also being charged more by some suppliers such as gas, as they now have to travel further to reach them.

“This situation is appalling. If the building, road and hillside collapse, which is perfectly feasible it will be catastrophic,” said another resident who wished to remain anonymous. “The authorities don’t seem to care about us or our lives at all. I really hope that no-one is hurt.”

The next Tala residents meeting will be held on July 26.

Safety in Paphos – SOS page on Facebook for further information.

Coronavirus: Poland and Portugal move to category B