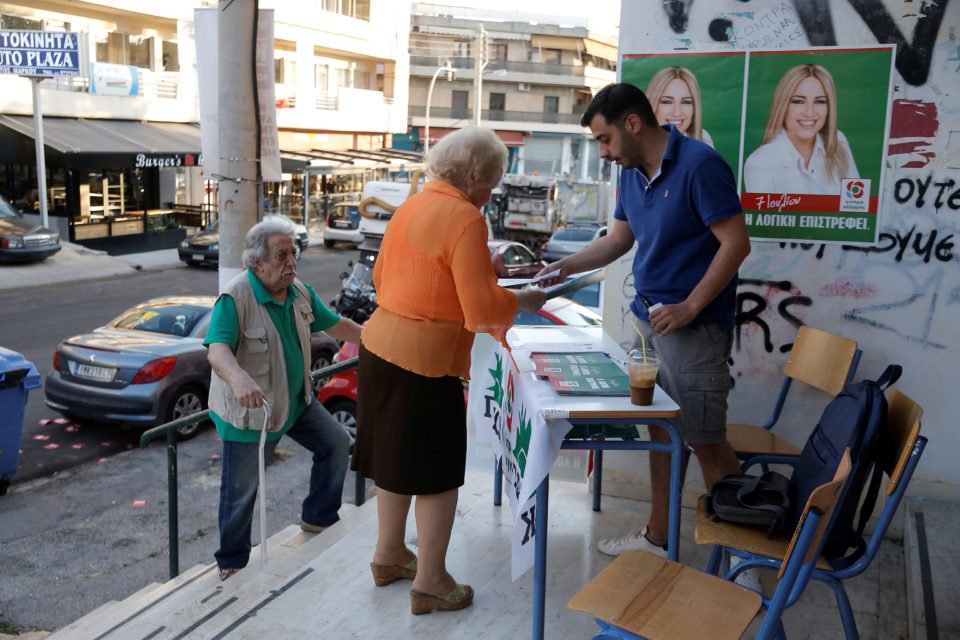 People are seen at a polling station during the general election in Athens, Greece, July 7, 2019. REUTERS/Elpida Kafantari NO RESALES. NO ARCHIVES

By Michele Kambas and Angeliki Koutantou

Greeks voted on Sunday in the first general election since the country emerged from international bailouts, with polls predicting the conservatives will return to power and end four years of leftist rule blamed for saddling Greece with more debt.

“This is a critical battle,” said Prime Minister Alexis Tsipras, who stormed to power in 2015 as a radical leftist vowing to tear up the austerity rule book, only to relent later.

“We are fighting it with optimism and determination … so that the sacrifices and hard work of our people do not go to waste,” he said after casting his vote in Athens on a hot summer morning.

The snap election was called after Syriza suffered a defeat in European elections in May, and is largely a showdown between two contenders — Tsipras and Kyriakos Mitsotakis of New Democracy, scion of a political dynasty who hopes to follow in the footsteps of his father as prime minister.

As Mitsotakis arrived at the polling station, a crowd of supporters erupted in cheers of “Here comes the prime minister!” A small group of radical leftist demonstrators tried to block the entrance.

“Today, Greeks take their fate in their own hands and I am certain that a better day for our country will dawn tomorrow,” Mitsotakis said.

Greece endured a debilitating financial crisis from 2010 that required three cash lifelines from its European Union partners. The economy is the public’s main concern, said Thomas Gerakis of pollsters MARC.

“I want the government that will be elected to do its best for the people, who are hungry,” said pensioner Christos Mpekos, 69. “To give jobs to the young so they don’t leave.”

Others said they forgave Tsipras for any errors.

“I am completely satisfied, whatever the mistakes, whatever the omissions. He got us out of the bailouts,” said Niki Loufa, 61, a retired bank worker.

Tsipras says that a vote cast for Mitsotakis would go to the political establishment, which forced Greece to the edge of the precipice in the first place.

But he has also been roundly criticised for mismanagement of crises and for brokering a deeply unpopular deal to end a dispute over the name of neighouring North Macedonia.

“Tsipras brought a pension plan that hurt us; he brought a deal over the Macedonia issue that stole our pride,” said another voter, 62-year-old Fotini.

Greece wrapped up its last economic adjustment programme in 2018 but remains under surveillance from lenders to ensure no future fiscal slippage. While economic growth has returned, Greek unemployment of 18 percent is the euro zone’s highest.

New Democracy has promised to invest in creating well-paid jobs with decent benefits. The outgoing government meanwhile hopes voters will reward it for upping the minimum wage by 11 percent and reinstating collective bargaining.