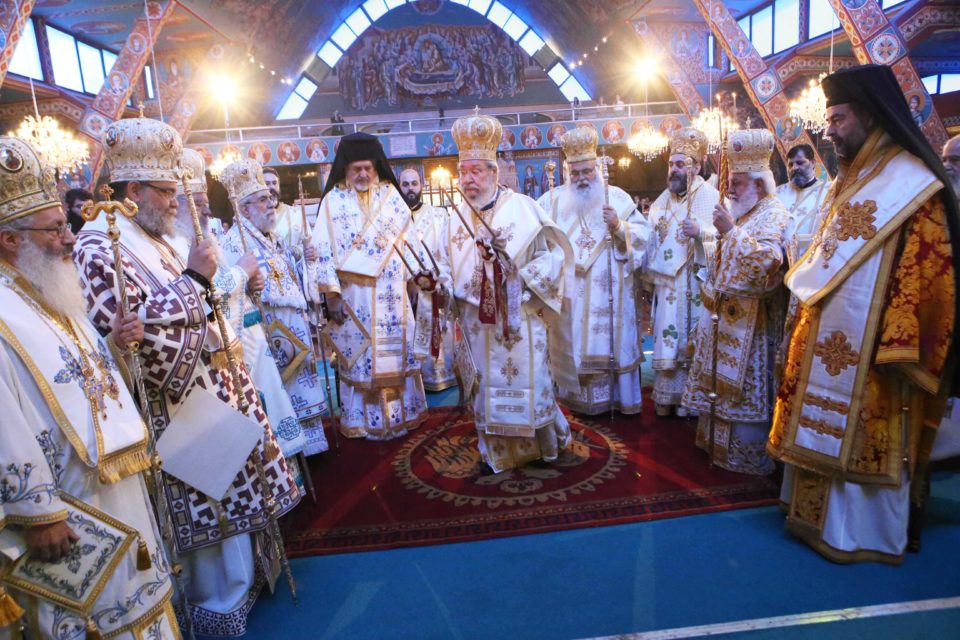 OUR CHURCH has always had lunatics in its ranks, but one who is currently flying the flag is Bishop Neophytos of Morphou, who has taken the role of prophet of liberation and political seer.

Neophytos, who back in 2004 was one of the few bishops that supported the Annan plan, has re-invented and re-branded himself as a fiery patriotic preacher, prophesying the destruction of Turkey and the liberation of Constantinople and Kyrenia. 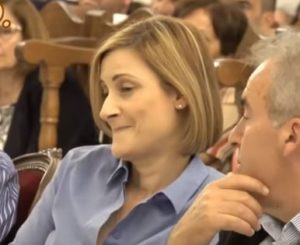 May 22 (https://youtu.be/tuS-ERqfSmg) in the presence of the acting director of the President’s diplomatic office and wife of the foreign minister Philippa Christodoulidou, who was sat in the front row.

The bishop started his speech by informing the faithful that he was in communication with a “secret, hidden saint,” whose identity he would not reveal, before revealing that he knew about the arrival of the Turkish ships such as the Fatih drillship, from a long time ago. “I was told about it by the saints – I did not see them myself – that it would happen.”

Then, he told Mrs Christodoulides. “And a colleague of your husband, a minister, came and we talked so they – those that govern – can know how the saints view the future and can act according to their faith; and when they do not, God will demote them and put others in their place.”

She nodded approvingly, aware that her God-fearing hubby acts according to his faith and that his multi-dimensional foreign policy is based on how the saints view the future. There is no way the super-ambitious Nicos would give God a reason to demote him.

THE CRACKPOT bishop saw a bright future for Kyproulla and Greece, after a trying period. He said: “Christ will not allow Orthodoxy and Hellenism to be lost. It will be tested so as to get rid of all this sinfulness we have put on ourselves. We need surgery, deep surgery and it will be carried out by the world war. Everyone will be frightened even though Cyprus will have no world war. Neither Cyprus nor Greece will have it, but our neighbours will have it. Some will be attacked with nuclear bombs. Chernobyl had consequences for so many people and we have so much cancer. Think about the Russians throwing nuclear bombs, and they will do it, on Turkey. But Turkey is next to us.”

Neophytos said that he studied the prophesies “on orders from contemporary people of God who told me that a bishop must study the prophesies of the saints,” to establish “which are true and which are false,” because “we have false ones as well;” these were the work of Satan.

It goes without saying that the prophesy about Russia’s nuclear attack on Turkey is absolutely true, because the “hidden, secret saint” confirmed it to nutcase Neophytos. Shortage of space does not allow us to report more of Neophytos’ geostrategic prophesies, but we will have more next week if the world war has not begun by then.

POOR OLD government spokesman Prodromos Prodromou seems to have developed quite a talent for contradicting himself, often in the same statement. It is not entirely his fault but a direct consequence of having to defend the positions of a president that is not a paragon of consistency, to put it mildly.

Explaining the letter sent to the UNSG, in which Prez Nik expressed his anxiety about the Turkish side’s unwillingness to resume talks, PP said “he sets no condition nor does he make the resumption dependent on any pre-condition, but just informs the UNSG that our position remains the resumption of the talks.” In his next sentence he said, “provided, of course, that the illegal interventions by Turkey in the EEZ of the Cyprus Republic are terminated.”

A day earlier, responding to Mevlut Cavusoglu’s claim that Prez Nik had refused to guarantee the Turkish Cypriot rights to the hydrocarbons, PP said the matter had been settled at Crans Montana in 2017 when the two sides agreed the management of natural resources would be the purview of the federal government. The Turkish Cypriots would get a say in the management of natural resources as part of the comprehensive settlement, he said, unable to hide his bewilderment at their moaning.

But even here there was a bit a contradiction, considering Prez Nik had repeatedly stated that he could not allow the Turkish Cypriots a say in the decision for the construction of the East Med pipeline because they would veto it. We will worry about that when there is settlement.

THE COMMITMENT to a settlement was underlined in the letter Nik sent the UNSG. He had sent six letters to Antonio Guterres “with the same content,” and “asked for the resumption of the talks,” he said in an interview published in Phil last Sunday.

My friend Alithia columnist Alecos Constantinides writing about the matter last Tuesday speculated that Nik received no answer to any of his six letters because if he had he would have told his interviewers, none of whom thought of asking. If Guterres did not respond, “this meant he did not take seriously the content of the letters”, that “my priority is the resumption of the talks,” concluded Constantinides.

Nik knows nobody takes his letters seriously but they are useful publicity tool aimed at showing that he is pro-active and pursuing an assertive diplomacy. This is why he always makes a point of announcing that he has sent letters to heads of government to report Turkey’s actions, as if his letter-writing has to be shared with the public.

After Crans Montana he made a big thing about the letters he sent to world leaders to report Turkey’s intransigence that was exclusively to blame for the collapse. Then as now, he did not reveal whether he received any replies. The world leaders may have adopted the Guterres approach.

THE COPY of the letter sent to Guterres was posted on the Kathimerini website and if it was authentic, it would provide another reason as to why he hasn’t received a reply – the English is poor. The letter seems to have been written in Greek and then ran through Google Translate for the English version. The first sentence is 76 words long.

At one point he writes: “Unfortunately rather than positively responding to your call, Turkey reacted with escalation of tension and a crescendo of offensive moves in Cyprus’ Exclusive Economic Zone poisoning once again the atmosphere that surrounds the process.” For his part, with the help of the 50 advisors he employs at the presidential palace, our Nik has undertaken poisoning the English language.

NO INFORMATION was given about the circumstances in which Prez Nik fell and broke his leg last weekend, but rumours have been circulating that it was caused by the ‘evil eye’ of the Famagustans that had been protesting outside the presidential palace a day before the accident.

The Famagustans outside the palace did not hide their anger at what they saw as the government’s indifference to Turkish plans to open the fenced area of the town. Nik told the delegation that were invited to see him (one of whom obviously cast the ‘evil eye’) that they were unfair to accuse him of inaction. How could they claim he did not want the return of Famagusta, when “both my sons-in-law are from the town,” said an indignant Nik.

“So if your sons-in-law were not from Famagusta you would not care about its return,” quipped a member of the delegation.

AS IF DEALING with Turkey’s violations of our EEZ is not bad enough, now we have to contend with an attack on our halloumi. A food expert of the World Wildlife Fund told Swedish TV that eating Cyprus halloumi could be worse than eating meat because of the large quantity of antibiotics Cypriot farmers give their animals.

Cyprus, she said, feeds the most antibiotics to farm animals in Europe. An affronted CyBC radio presenter tried get agriculture minister Costas Kadis to say that this was a false accusation, but he did not oblige. The findings about the antibiotics were included in a study done some time ago, he said.

MOTHER Russia’s foreign minister Sergei Lavrov, in a meeting he had with comrade Andros in Moscow last week, demanded to know what was happening with the money that was destined for the construction of a Russian Orthodox Cathedral in Cyprus but could not be used because it was in an account in FBME, which is under administration.

The money was safe, the administrator of the bank said. It was in an account in the name of the Russian Orthodox Church but he could not divulge the amount. When a liquidator is appointed – the Central Bank had applied to the court for the appointment of a liquidator – he or she will decide how the assets of FBME would be distributed.

Hopefully all the money will be returned to the Russian Church because if it is not the saints might get cross and prevent Neophytos’ prophesy about the nuking of Turkey by Russia from happening.

I SEE the mighty Odysseas has expanded the responsibilities of his office and is now conducting patriotic audits as well. The Cyprus Mail did not pass his patriotic audit last Monday and after a quick investigation he announced he sent the case file to the police for further action. I hate to think this was not an act of vindictiveness, because our establishment has refused to join the cult of Odysseas and offer him the adoration he craves.

Our View: Government so used to contradicting itself, it is unaware of it