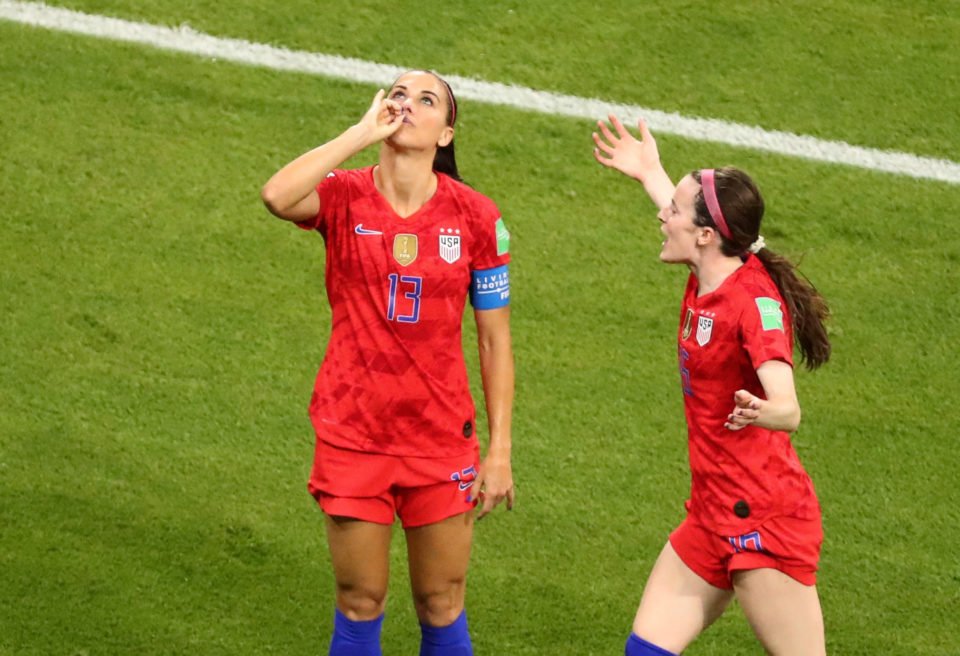 The love hate relationship between America and England surfaced once again this week as the two English-speaking countries across the pond did battle in France across the moat for a place in the Women’s World Cup final after America dispatched France in the quarter finals. Ties that bind tend to split people asunder in football as the Scots would vouch.

Last Tuesday it was England’s turn to be knocked out. They were out played – out classed even – by Team America but not before they proved women’s football came of age as an exciting spectator sport. That said women in general are less obsessed with the game, talk less about team line ups and tactics and still go walkabout when football dominates the television screens.

But change is in the air: women play great football, get over it! I have.

I used to believe that women thought the off-side rule was about a bit on the side until I discovered Smirnoff! For those unborn or too young to remember, there was a very clever advertising campaign by Smirnoff Vodka in the 70s and 80s that identified a series of hidden truths with the caption attributing their discovery to Smirnoff; the most notorious of them was: ‘I thought Wan-King was a town in China until I discovered Smirnoff.’

But this is Sunday and no time for risqué quotes from bygone times. Besides there is a humourless pedant around who will check the internet and discover there is indeed a town in China by that name and make a snide comment.

The obvious truth about the beautiful game is that women are just as capable of kicking and passing and dribbling and heading the ball as men, just as they can hit a ball over the net with a racket in tennis. Actually, I prefer watching women’s tennis as there are more rallies compared to men’s tennis, which has been spoilt as a spectator sport by the speed of the men’s serve.

With the exception of Team Cameroon who went over the top when a goal they scored against England was disallowed by the video assisted referee (VAR), the women’s football on display in this World Cup shows that although it is less aggressive and gentler it can be as exciting, if in a different way to the male version.

It has been all been great fun. The fans good natured, their voices more female and less aggressive, with no hooligans and no drunken brawls. Sure women players foul, dive, argue, protest and spit too – not as much as men – but they are not like a bunch of peacocks parading in the Park.

On the other hand, women players are not as fast and their passing not as clinical and there was the odd howler – gela in Cypriot Greek. I also felt that an award of a penalty does not induce as much fear in goalkeepers as it normally does in the men’s game.

England had a goal against America disallowed by VAR, missed a crucial penalty and a player sent off in quick succession and the English lionesses succumbed 2-1 to American beauty. By which I do not mean to the delectable Alex Morgan who scored the second goal, but the elan with which Team America played the beautiful game throughout the tournament.

It is interesting that Male Team America has never made it to the top table and could not even make it to the Group stage in Russia last year, yet the Female Team is well on the way to winning the World Cup for a second time in succession.

In the 20th century the Americans gave the impression they were not interested in soccer. Apparently, the difference in success between women and men in international football in America is the topic of conversation among the chattering classes in England fed up with Brexit and Trump – a welcome change that would have shifted to the greatness of English womanhood had they beaten America.

By America, I mean the USA because Latin America has been football crazy for generations with lots of World Cup trophies to prove it. Incidentally I am still upset Brazil did not win the men’s World Cup last year. They were by far the best side and their knock out was a fluke. But as they say in the jargon: that is football!

Male Team England is jinxed when it comes to the World Cup. Worse still I believe they are jinxed by the male editors and sports journalists of the red top and Express newspapers and they are going to do the same with the women’s team.

Female Team England should give the men from the press a wide berth to avoid the agony they have inflicted on us since 1966. Also I would not have chosen Phill Neville to manage Female Team England. Like Gareth Southgate he is nice but apart from being jinxed by the red tops he is a bloke. A manager is nothing if not a leader and you cannot lead lionesses if you are a lion.

Anyone who has watched the wonderful programmes on lions on television knows that lionesses cannot be led by lions whom they regard are lazy freeloaders who do nothing except selfishly grab the lion’s share of food, roar for no reason and have bad sex – so bad most lionesses seem nonchalant during the act.

I am joking of course but there are good reasons why Female Team England needs a woman leader, preferably of the Thatcher variety. The most critical time in international football including in the match against America is the 15 minutes you spend in the dressing room at half time that apparently Phill Neville could not spend this time with his team. Yet that’s when you need leadership the most, not to advise about tactics but to inspire and fire you up.

As in politics so in football, leaders need to inspire.

Sand, sand, everywhere … but not enough of the right grain