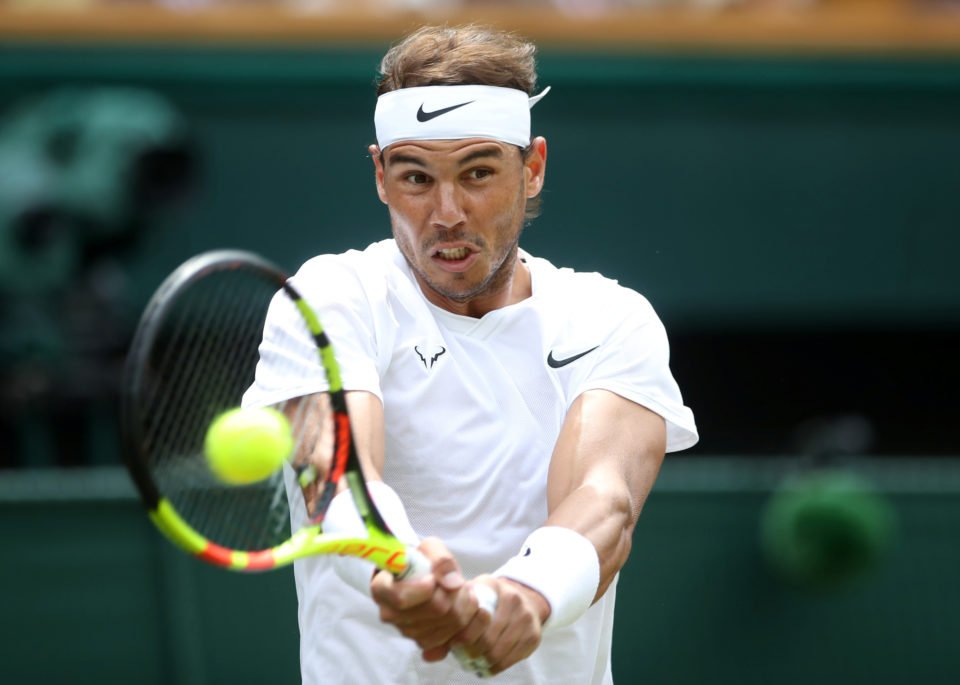 Tougher tests will surely come for two-time champion Rafa Nadal, who may have to beat Roger Federer and Novak Djokovic if he wants to complete a Roland Garros-Wimbledon double for the third time

He was irritated at being seeded third at the grasscourt major despite his status as world number two and he was left exasperated when the draw put him on a second-round collision course with Australian hot-head Nick Kyrgios – a player who thrives on rubbing Nadal up the wrong way.

Those setbacks have well and truly fired up the Spaniard and it was poor Joao Sousa who felt the full force of Nadal’s fury on Monday during a 6-2 6-2 6-2 demolition job in the fourth round.

Tougher tests will surely come for the two-time champion, who may have to beat Roger Federer and Novak Djokovic if he wants to complete a Roland Garros-Wimbledon double for the third time in his career, but for now he was happy to show off the kind of ruthless streak that Boris Becker hailed as “vintage Nadal on grass”.

“It was a good solid match. A lot of positive things in there,” the 18-times Grand Slam champion, whose surgically-repaired body often struggles to cope with the demands of playing on the slick grass surface, said with a smile.

“Good forehands, good backhands and creating some good volleys, so I am happy to be in the quarter-finals again.

“The body is holding up well and I am playing some good tennis and winning matches in straight sets also helps.”

Until this year, the only Portuguese to create a racket, literally, in the singles at Wimbledon was Michelle Larcher de Brito.

But whereas she made her name thanks to the cacophony of ear-splitting shrieks and squeals that could be heard all around, and beyond, the 42 acres that make up the All England Club, Sousa had let his racket do the talking as he became the first Portuguese to reach the last 16 of a major.

The run included a memorable second-round win over former U.S. Open champion Marin Cilic but the world number 69 simply ran out of ideas when he came up against a tennis behemoth who had his eyes set on a 39th quarter-final appearance at the majors.

The sweet-spot in Nadal’s racket appeared to be the size of a beachball on Monday as the Spaniard fired off formidable forehands, breathtaking backhands and thunderbolt aces to burst Sousa’s Wimbledon bubble.

As Nadal hurtled to a 4-0 lead in the first set, Sousa appeared to have adopted some Larcher de Brito tactics by producing a couple of comical grunts. But rather than throwing Nadal off stride, the “hay-way” yelps only made the crowd chuckle.

Thirty winners in all flew off Nadal’s racket, none better than the running cross-court passing shot he flicked over the net as he chased down a Sousa dropshot to end a breathtaking 20-shot exchange.

While the Centre Court crowd erupted as they rose to their feet, some fans were seen bowing to Nadal’s greatness and even Sousa joined in by applauding the effort.

The multi-lingual Sousa may speak Portuguese, Spanish, Catalan, English, French and Italian but when it came to the language of tennis there was only one man on court who was fluent.

Nadal’s fifth ace set up a last-eight meeting with the winner of the all-American duel between Tennys Sandgren and Sam Querrey.