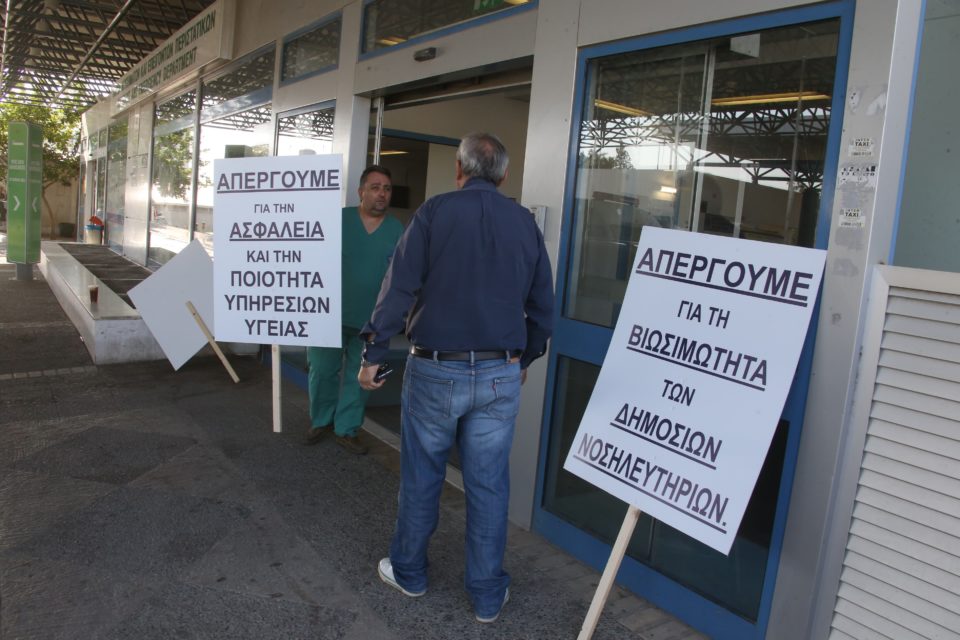 Members of state doctors union Pasyki staged a 24-hour strike at A&E departments island-wide on Tuesday over acute understaffing issues which they say put patients and staff at risk.

Pasyki said that A&E doctors have been working without a break for months which puts burnt-out doctors at risk for carrying out medical errors.

Gesy has also contributed to the issue of personnel shortages, as a wave of doctors from the A&E and pathological departments left to join the healthcare system that launched in June as GPs.

Health Minister Constantinos Ioannou visited the Nicosia general hospital A&E department on Tuesday morning and after discussing with the frustrated doctors declared his willingness to work towards finding short and long-term solutions.

He said however that there was no excuse for their decision to strike, noting that issues are resolved through dialogue and not through strikes.

“Someone strikes when the side of the employer, in this case the state healthcare services (Okypy), does not deal with issues that arise,” Ioannou said, adding that “in the case at hand, we are listening and considering suggestions.”

Pasyki said it is willing to partake in a dialogue, noting that the union has for a long time been informing the health minister of the issues and has suggested several solutions.

Pasyki secretary Petros Katsioloudis highlighted the need for the health ministry to better inform the public of the appropriate use of A&E departments, which should only be sought for serious incidents.

The health minister noted that the strike did not have a negative effect on patients on Tuesday due to low numbers of visits, as he said would be the case on a daily basis “if we as a people learnt to use the emergency services correctly.”

Patients with mild health issues who visited general hospital A&E departments on Tuesday were re-directed to A&Es of private hospitals which had agreed to help de-congest the public hospital emergency departments during the strike.

During a meeting of the doctors’ unions on Saturday along with the state Okypy, the minister said although Pasyki deemed any measures and proposals put forth by authorities as inadequate, they never suggested anything better – or anything else at all for that matter that could help tackle the problem.

Nonetheless, a plan had been put in place to deal with urgent cases during the strike, Ioannou said.

Pasyki said the health ministry had been warned several times that doctors would be leaving state hospitals “but unfortunately acted too late and only after measures (the strike) were announced.”

Saturday’s meeting came up with proposals for GPs to help out in the A&E departments. Efforts would continue to fill vacant posts.

It was also decided that an ad hoc committee would be set up which would include experts, A&E department heads and all those immediately affected to examine the problems and submit recommendations on an overhaul of the A&E departments.