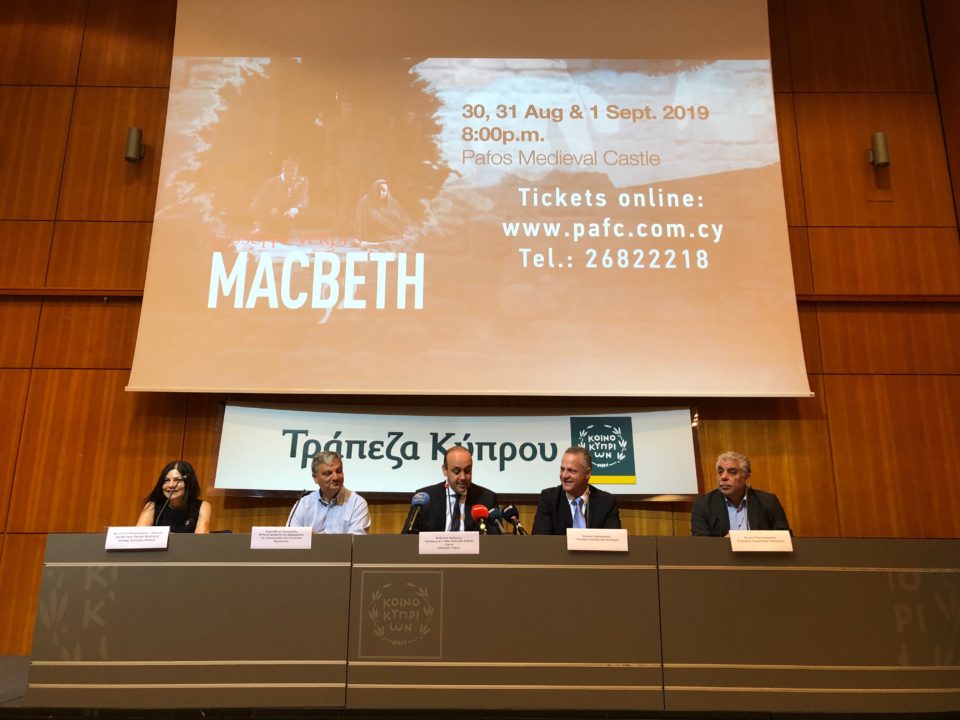 The 21st edition of the ‘Pafos Aphrodite Festival’ will present Giuseppe Verdi’s popular opera Macbeth in a production by the Bolshoi Theatre of Belarus at the end of August.

Verdi’s masterpiece will be performed on August 30, 31 and September 1 at the square of the mediaeval castle in Kato Paphos. Simultaneous translation will be available in Greek, English and Russian via subtitles.

The dramatic opera, Macbeth, (Macbetto) is based on William Shakespeare’s play of the same name and consists of four acts with an Italian libretto by Francesco Maria Piave. It premiered on  March 14, 1847 at the Teatro della Pergola in Florence.

The announcement of this year’s festival was made during a news conference in Nicosia, where the ‘opera thriller’ was presented.

“Verdi goes beyond the conventional framework of his era and creates a play with theatrical power and characters of unprecedented psychological depth and intensity. His skillful orchestration dramatically sketches out violence, conspiracy and death,” an announcement said.

The president of the Cyprus Aphrodite Festival, Paphos Mayor, Phedonas Phedonos, spoke of the 21 years of creative development of the institution, emphasising its importance, and that event is at the heart of the cultural and artistic events of Cyprus, as it is now recognised as one of the largest, if not the largest festival, in Cyprus.

“The attempt to consolidate and establish the institution was not an easy task as opera was not a known or widespread form of art in Cyprus, and it was not known if there would be a large enough audience on the island to support such an event,” he said.

In addition, the cost of production made the venture even more tricky.

The mayor pointed out that in 21 years of the festival, it has received strong criticism for promoting foreign cultural productions, as well as concerns about the usefulness and sustainability of the event.

“Today, however”, he said, “with pride we can say we did it. The long course of the institution has added to its continued popularity, even in the difficult times of the economic crisis, and this proves that the Pafos Aphrodite Festival has an important role to play in the cultural events of our country.”

He added that the audience, both local and foreign, acknowledge the quality of the festival and continue to support it by attending and that Paphos and Cyprus has gained a place on the cultural stage.

Phedonos also said that the festival this year will strengthen ties between Belarus and Cyprus and pave the way for further co-operation in the field of the arts as well as in more broad terms.

The minister of education, Costas Hambiaouris, said the festival had greatly contributed and strengthened Cyprus’ cultural tourism and also relations with other countries. He added that the ministry would continue to support the efforts of the festival going forward.

The plot of the opera unfolds in 11th century Scotland and tells of the rise of Macbeth to the throne of Scotland after he murders King Duncan and General Banquo.

Accomplice and instigator of the criminal acts is Macbeth’s wife, Lady Macbeth. In the end, she commits suicide burdened by guilt and Macbeth is killed in battle by noble Macduff who defends Malcolm’s (Duncan’s son) rightful claim to the throne.

Interpol chief says Cyprus considered one of the ‘safest countries’