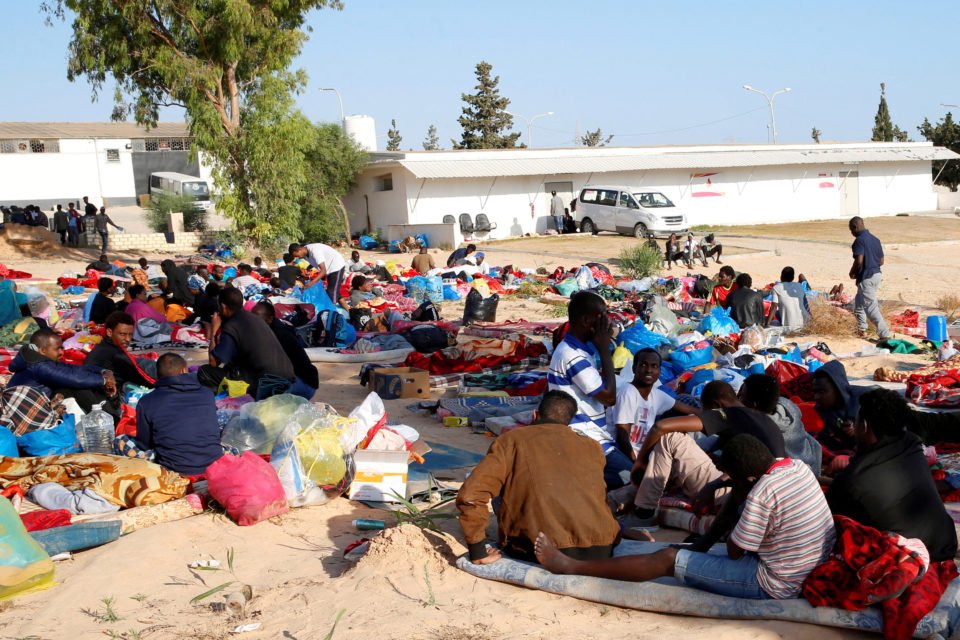 Migrants are seen with their belongings in the yard of a detention centre hit by an air strike in Tripoli.

A migrant detention centre in Tripoli, hit by a deadly air strike last week, is being gradually emptied following a decision by Libyan authorities to release its inmates, the U.N. refugee agency UNHCR said on Wednesday.

The July 3 air strike on Tajoura detention centre killed 53 people and injured 130, according to the latest death toll from the World Health Organization.

The United Nations has said the strike on the camp, holding an estimated 350 people this week, could amount to a war crime.

The strike occurred as eastern forces under Khalifa Haftar keep up a ground and aerial offensive to wrest control of Tripoli from the U.N.-backed government. The two sides blame each other for the attack.

It left frightened migrants and refugees desperate to leave the centre in an eastern suburb of the capital. The United Nations has also called for the migrants to evacuated to safety.

“At some point yesterday (Tuesday), a decision was taken by authorities to release the detainees. They were also given an option, they were not compelled,” UNHCR spokesman Charlie Yaxley said.

In all, some 260 migrants immediately left and walked to a UNHCR departure facility where they were allowed to stay overnight and given emergency assistance. They are expected to go to a community day centre where they will receive food, water and medical care, he said.

Some 55 of the migrants deemed most vulnerable, many of them women and unaccompanied children, stayed in the camp awaiting transfer on Wednesday to UNHCR’s departure facility inTripoli, security conditions permitting, he said. They are slated to be evacuated to a third safe country.

Libya is one of the main departure points for African migrants fleeing poverty and war to try to reach Italy by boat, but many are picked up and brought back by the Libyan coast guard, supported by the European Union.

Some migrants had demanded that all the camp’s inhabitants be evacuated to a third safe country, delaying operations, UNHCR said in a statement posted on Twitter.

The UNHCR departure centre in Tripoli and a transit centre in Niger are full, Yaxley said, adding: “We are relying on states to come forward with evacuation places to get people out”.

Several dozen migrants and refugees have chosen to stay in the detention centre for now following the sudden decision by authorities, but are free to go, he said.