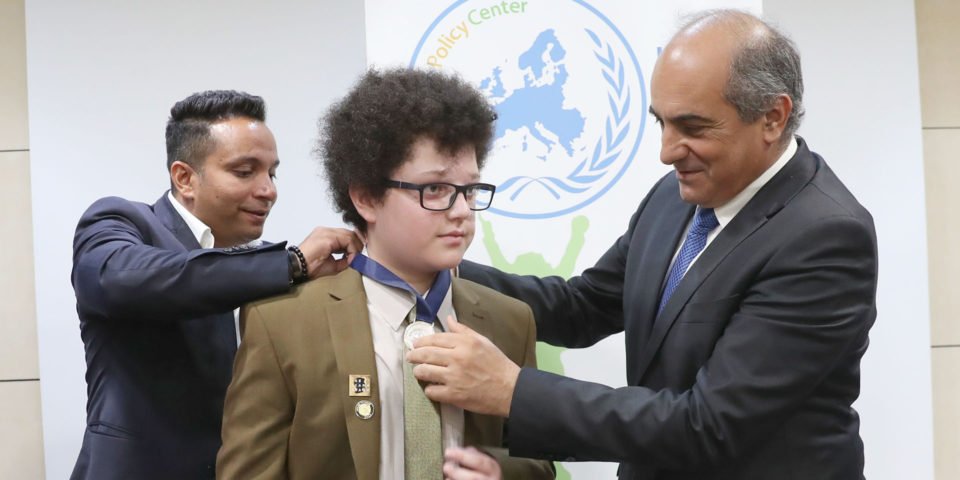 Nicholas Nikiforou, 12 has been given the ‘Children’s Rights Defender’ award 2019

Nicholas Nikiforou, 12 has been given the ‘Children’s Rights Defender’ award 2019 by the Hope For Children (HFC) CRC Policy Centre, a prize that is handed out to people or entities that have promoted and continue to promote children’s rights to their community and society in general.

Nikiforou was given the award at a ceremony at European Union House in Nicosia by HFC Director-General Joseph Borghese and House President Demetris Syllouris.

A Cypriot resident of the UK, Nikiforou was born with a rare type of pre-cancerous melanoma on his face, which despite its successful removal, left scars. This resulted in him being bullied, prompting him to launch a campaign against the phenomenon.

His actions led him to become the face of Kinder in 2016, to win the Diana Award in 2017, the British Citizen Award and the “Positive Role Model” prize of the National Diversity Awards of the United Kingdom in 2018.

In 2017 he was voted as one of the 24 most sensitised Bristolians under the age of 24. His actions include launching and promotion of anti-bullying campaigns, featuring on TV and radio shows in the UK, participation and winning of regional art competitions and realisation of motivational speeches in schools and universities in relation to combating bullying.

Ierotheos Papadopoulos, Head of the European Commission Representation in Cyprus opened the ceremony with a short speech. Then, Andria Neocleous, Director of the Humanitarian Division of HFC referred to the importance of Nikiforou’s actions and to the necessity of having programmes in schools for the empowerment and training of children aiming at combating bullying. “We are here because we want to be part of Nicholas journey; because we want to spread the example of Nicholas to as many people as possible,” she said.

In his speech, Nikiforou said there were over seven billion people in the world, all different. “It is my belief that we all have something to give to the world. My vision has been for all individuals in society to be accepted for who they are. If we embrace each other’s differences, the world would be a better place,” he said.

Borghese during the handing over of the award congratulated the youngster for his outstanding work against bullying and encouraged him to continue transferring messages of courage, love and respect that he is promoting both through his speeches and his art.

Anastasiades vetoes House bill to set its own budget