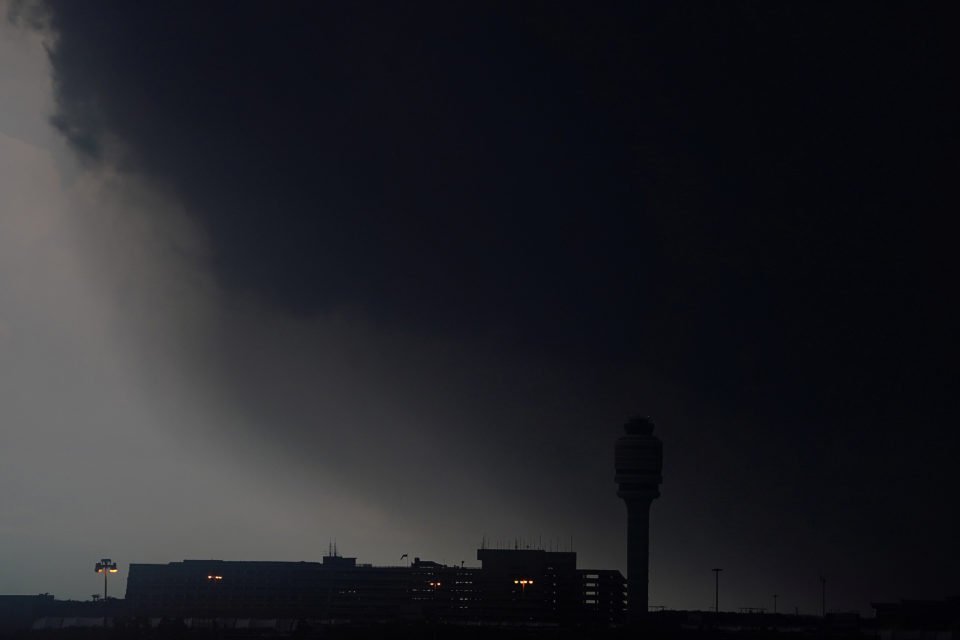 A thunder storm rolls into the Orlando International Airport area.

A storm churning in the Gulf of Mexico and aimed at water-logged New Orleans is likely to make landfall as the first Atlantic hurricane of the 2019 season by late Friday or early Saturday, forecasters said.

The storm, expected to be designated a tropical storm early on Thursday, is set to deposit between 10 to 15 inches of rain on the Gulf Coast on Friday and Saturday from west Texas, through New Orleans and the Louisiana coast.

Isolated spots will receive a drenching 20 inches of rain,

“The whole area is in for a soaking, the worst of it on Saturday,” said David Roth, a meteorologist from the National Weather Service’s Weather Prediction Center.

Louisiana Gov. John Bel Edwards declared a state of emergency on Wednesday. “The storm system will likely produce storm surge, hurricane force winds,” he said at a news conference. “No one should take this storm lightly.”

National Guard troops were in place across the state, the governor said.

U.S. oil producers on Wednesday cut nearly a third of Gulf of Mexico crude output ahead of the storm.

Fifteen production platforms and four rigs were evacuated in the north central Gulf of Mexico, according to a U.S. regulator as oil firms moved workers to safety.

The slow moving storm, crawling at about 9 mph early on Thursday and gaining strength from warm Gulf waters, will be named Barry if it strengthens into a tropical storm with winds of 39 mph or more on the Saffir–Simpson hurricane scale.

It will become Hurricane Barry if it reaches wind speeds of 74 mph (119 km) as expected when it makes landfall near the mouth of the Mississippi River and just west of New Orleans.

But the storm remained a tropical disturbance early on Thursday about 125 miles (200 km) south-southeast of the mouth of the Mississippi River, and packed sustained winds of 30 mph (45 km), the National Hurricane Center said.

New Orleans was already hit with widespread flooding on Wednesday from heavy rain spawned from a weather system that might inundate the low-lying U.S. city.

New Orleans officials warned that a hurricane could bring a coastal storm surge into the mouth of the Mississippi River capable of raising the river’s height to 20 feet (6 meters) above sea level, high enough to overflow some sections of the levee system protecting the city.

The city was hit early Wednesday by thunderstorms that meteorologists said were associated with the building Gulf storm.

Officials in Plaquemines Parish, south of New Orleans, ordered residents in some areas to plan to evacuate their homes on Thursday ahead of the storm.

And west of New Orleans, officials in Vermilion Parish advised some residents in low-lying areas and people living in mobile homes to consider moving to higher ground.