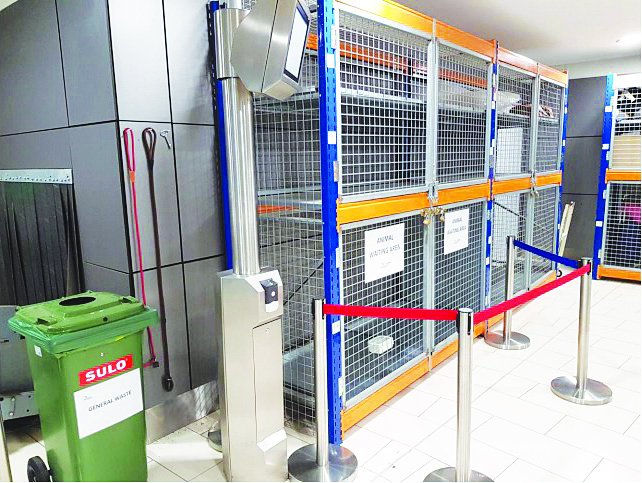 AN animal welfare group that rescues cats has launched a petition calling on Hermes Airports to provide safe areas where pets travelling abroad can be taken after a four-month old kitten, Tiny, was crushed to death on a conveyor belt this week.

Volunteers who witnessed the incident are badly shaken and traumatized, they said. The incident took place on early on Tuesday.

Animal Action Cyprus, a UK Registered Charity that helps rescue Cyprus strays, launched a petition calling on Hermes – the company managing the Larnaca and Paphos airports – to provide a room where animals can be safely held during the scanning process without the opportunity to run off.

If they cannot provide that, then, they need to purchase an X-ray machine that is safe for animals like the one at Heathrow Airport, the group said in their petition.

According to another volunteer who was sending a rescued cat abroad, she witnessed the incident and said it was bound to happen eventually as the room where the animals are taken is completely unsafe, and there had been several incidents in the past involving travelling pets but this was the first time an animal had died.

The volunteer, who wished to remain anonymous, said she was at the airport outside the X-ray area when she heard one of the escorts saying that the cats were loose.

“I ran to the glass door and everyone in there was in a panic trying to catch the kitten as it was trying to find a place to hide,” she told the Cyprus Mail.

“The poor thing was shaking from pain,” she said, almost in tears.

She added that none of the airport staff reacted or rushed to push the stop button on the conveyor belt. Another volunteer witnessing the incident said Tiny most probably choked.

The Cyprus Mail has learned that the staff, when asked to stop the conveyor belt replied that the button did not work while after the kitten was found dead, they asked the volunteer to clean up the blood.

Hermes Airports, in a written statement expressed its sorrow over the incident but said that ground-handling personnel had asked the woman who was carrying Tiny and two other kittens to keep them in their animal crates in order to get through the x-ray machine as per airport regulations.

“Instead, as we have learned, the woman, at her own discretion, took the cats to check in the cage empty, and as a result, one cat escaped and ran under the X-ray where he was killed,” the statement said.

But volunteers say this is not the case as the excess baggage staff always insist the animals are taken out their cages prior to scanning.

“Many times we asked to leave them inside the crate and they just refuse, saying they must be outside the cages,” Gloria Mew, secretary of Animal Action Cyprus, said.

According to volunteers, “Hermes does not control security, the staff on the desk do. If they say jump you ask how high because otherwise the cats don’t fly.”

Mew, who has been involved in animal rescue in Cyprus since 2001, said she has repeatedly raised the issue with Hermes but there was no response.

“They have not helped. Now this dreadful accident has left the rescuer distraught and saying she will not be involved in animal rescue again,” she said.

”This kitten had been saved from certain death only to lose his life because of airport negligence,” the petition she launched says.

Hermes Airports said they place great emphasis on the issue of animal safety, in compliance with all relevant regulations regarding the handling of animals at airports.

“It is in our immediate plans to create a special animal handling area where all the related procedures (check in, Xray etc) will be handled. In this special room there will also be a waiting area while the animals will be transported to the plane by the competent personnel,” the statement said.

The company said they were in constant contact with a representative of animal shelters on a regular basis and have requested meetings with the registered shelters in order to explain the procedures to be followed when traveling with a pet “but also to share with them our plans to create a special space for traveling animals.”

The petition, that has so far gathered around 3,750 signatures, may be found here.

ACCORDING to Hermes rules for travelling with pets, a PDF found online, which was issued in January 2018 the option exists to screen the animal inside or outside the crates.

The pet owner has the option to screen the crate and the pet together, whereby the pet will remain inside the crate and both the pet and the crate will be processed together through the X-Ray Screening Machine

“Screening pets inside their cage/crate is the best option when animals are exhibiting aggressive, unruly or scared behaviour that may jeopardise the safety of owners and airport staff,” the document says.

An ‘animal waiting area’ is available at the security screening point, where pet owners may safely keep their pet while the pet’s crate is being screened, it says.

The pet owner may choose to carry the animal through. Alternatively, if an animal is too large to carry or is unruly, a leash without metal parts is available at the screening point.

“Pet owners escorting more than one pet will need to follow the procedure outlined above for each additional pet,” the rules state.

“Pet behaviour lies under the responsibility of the owners and to this effect pet owners are encouraged to maintain their animal as calm as possible,” it adds.

“The security screening area…. is a secure area with all doors closed, thus ensuring that animals are unable to escape into the terminal building.”