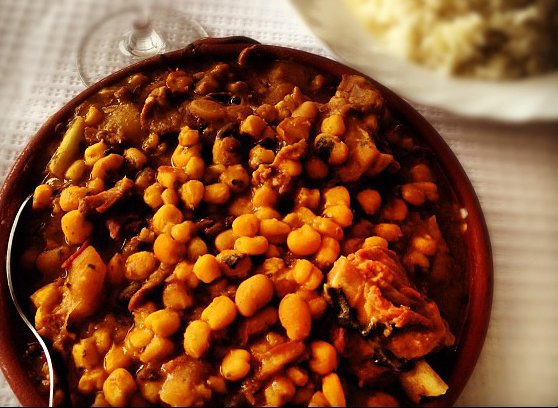 Cachupa. Sounds like a lollipop, doesn’t it, or a video game character by way of Japan? And yet it’s actually neither of these things; rather, it’s a sumptuously scrummy slow-cooked stew from the Cape Verde islands.

Half the size of Cyprus in terms of area, and with half the population, the Cape Verde islands are named for Cape Verde Peninsula in Senegal, the westernmost point of the African continent. Which has led to quite considerable confusion regarding the nation’s antecedents: various accounts suggest that Portuguese explorer Dinis Dias who discovered the islands in 1445; others claim he merely rocked up at the mainland peninsula, and it was actually Italian adventurer Antonio de Noli who first laid claim to the nation. Either way, it was the Portuguese who won out in the end, founding a settlement on Santiago and basically ruling the isles until their independence in 1975.

Today, this horseshoe-shaped cluster of eight islets and ten islands is a haven for holidaymakers. Though the nation has a history of dodgy marine-based pursuits (including whaling and piracy) and a current reputation for musicality, neither is enough to financially sustain an entire population. So, as there’s little agricultural land and next to no natural resources, it’s tourism that’s become the mainstay of the economy. And it seems to be working.

Although there are actually more Cape Verdean citizens living abroad than at home, the nation is managing to do pretty well for itself. The vast majority of the populace are literate, it’s now officially considered a country of ‘average development’ and life expectancy hovers at around 75 for women and 70 for men. It’s probably the seafood diet that does it… Enter (or re-enter) cachupa.

While each of the islands has its own distinct recipe for the national dish, all generally involve fish. You can, of course, plump for meat instead, but a fish dish is the authentic Cape Verde iteration. Made with corn, beans, cassava, onions, and – on occasion – blood sausage, the dish includes a few bay leaves for flavour and a bit of chilli for spice. The whole is then slow-cooked for a couple of hours before being enjoyed with a round of the national drink: grogue.

If the word seems familiar, you’re right on the money. This beverage may well be the origin of our word ‘grog’, and though it’s a term that’s fallen out of contemporary usage, in Cape Verde it’s still the drink of choice: a sugar-cane based rum that’s purportedly so strong it can addle the mind.

Partial lunar eclipse will be visible from Cyprus on July 16