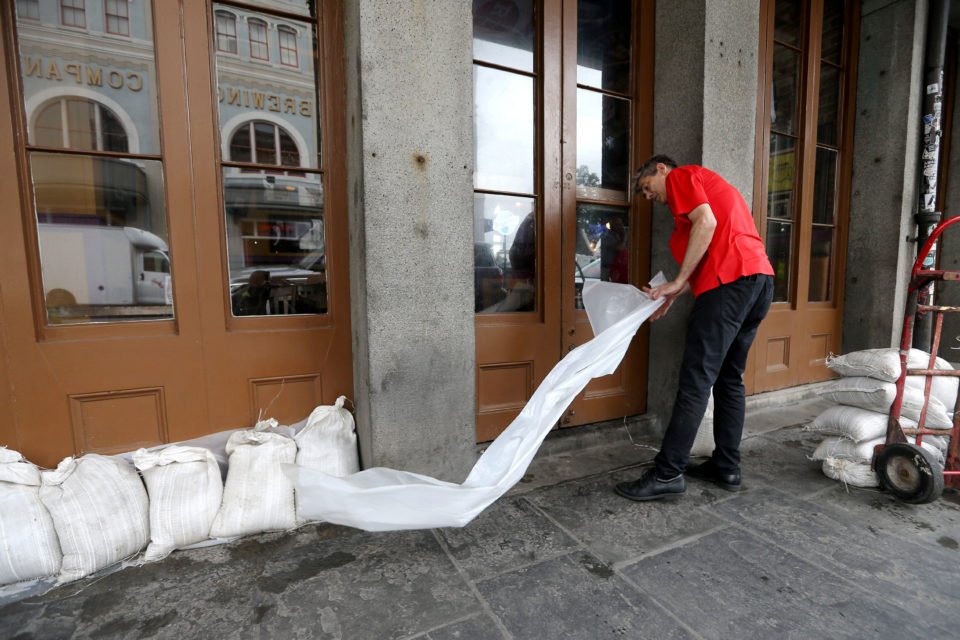 An employee places sandbags in front of a business in the French Quarter as Tropical Storm Barry approaches land in New Orleans.

Tropical Storm Barry, poised to make landfall as the first Atlantic hurricane of 2019, churned ever closer to Louisiana’s shore early on Saturday as most New Orleans residents huddled at home, or in bars, bracing for the threat of severe flooding.

Authorities urged citizens to secure property, stock up provisions and shelter in place. However, some nervous residents opted to flee the city, and tourism officials reported an abrupt exodus of out-of-town visitors on Friday.

Mandatory evacuations were ordered in outlying coastal areas beyond the protection of levees in neighboring Plaquemines and Jefferson parishes south of the city.

The storm, packing maximum sustained winds of 65 miles per hour (100 kph), was on track to reach hurricane strength shortly before crossing the Louisiana coastline southwest of New Orleans on Saturday, the National Weather Service said.

Landfall predictions were pushed back from sunrise to late morning or early afternoon, as the storm crawled across the Gulf Coast at about 3 mph, forecasters with the National Hurricane Center said early Saturday.

Rain bands were already hitting the coast before sunrise, and more than 56,000 homes and businesses in Louisiana were without power, according to tracking site PowerOutage.us.

Meteorologists warned that torrential rain – as much as 2 feet (60 cm) in some places – could unleash severe flooding as the storm moves inland from the Gulf of Mexico, where oil and gas operations have already cut production by nearly 60 percent.

U.S. President Donald Trump declared a state of emergency for Louisiana on Friday, freeing up federal disaster assistance if needed.

The impending storm could test beefed-up flood defenses put in place since the 2005 calamity of Hurricane Katrina, which left much of New Orleans underwater and killed about 1,800 people.

The brunt of Barry’s force was expected to skirt the western edge of New Orleans, avoiding a direct hit on a low-lying city virtually surrounded on all sides by rising waters.

“There is no system in the world that can handle that amount of rainfall in such a short period,” Cantrell said on Twitter.

Authorities were paying specially close attention to the levee system built to contain the lower Mississippi River, which winds through the heart of New Orleans and was already above flood stage from months of heavy upstream rainfall over the Midwest.

A coastal storm surge into the mouth of the Mississippi was expected to push its crest to 19 feet (5.79 m) in New Orleans on Saturday, the highest level since 1950 and dangerously close to the top of the city’s levees.

New Orleans was already saturated after thunderstorms drenched it with a foot of rain on Wednesday.

While street flooding seemed probable, the U.S. Army Corps of Engineers insisted that significant breaching of the 20-foot-tall levees in New Orleans was unlikely.

Levee floodgates normally left open to allow passage of traffic were being closed, along with a giant ocean surge barrier erected after Katrina.

The level of Lake Pontchartrain, an estuary on the city’s northern flank, rose by 3 feet on Friday, triggering closure of a floodgate on a drainage canal that breached during Katrina, officials said.

Ahead of the storm, New Orleans residents flocked to supermarkets for bottled water, ice, snacks and beer, thronging grocery stores in such numbers that some ran out of shopping carts.

Across the city, motorists left cars parked on the raised median strips of roadways, hoping the extra elevation would protect them from flood damage. Sandbags were stacked outside of hotels, shops and other businesses along Canal Street.

The sheriff’s office said dozens of jail inmates held on minor charges were released to make room for nearly 70 inmates transferred from a temporary lockup to the main detention facility, which was built to withstand a major hurricane.

City residents were asked to remain indoors after 8 p.m. but some, in keeping with New Orleans’ party spirit, decided to hunker down in more festive surroundings.

“The rain’s not going to shut us down, we’re going to shut this place down,” said Brett Tidball, 33, who gathered with eight friends at Bourbon Street bar for his bachelor party, asking the pianist for back-to-back songs about bad weather.

Russia to halt gas flows to Finland on Saturday