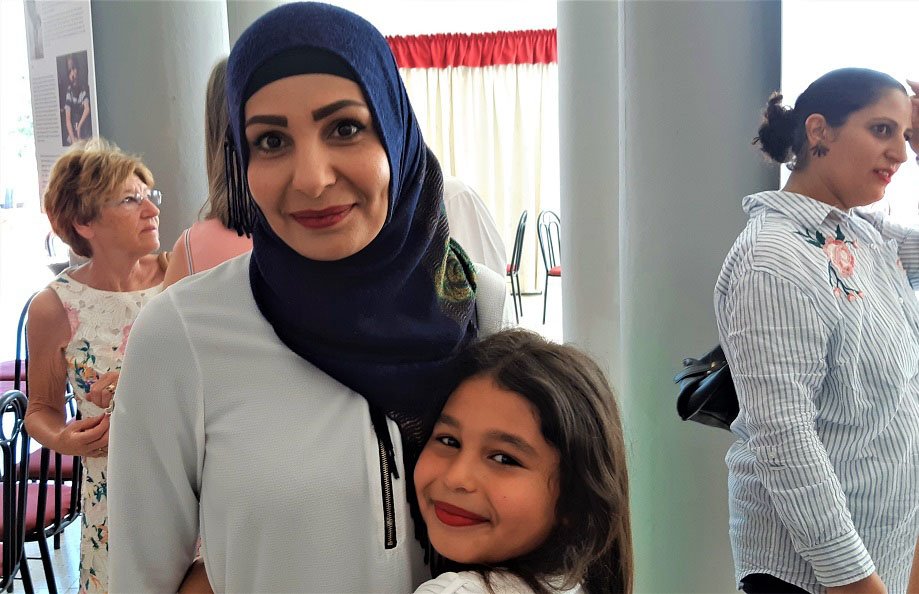 Refugees and asylum seekers in Paphos are appealing to the local community for acceptance, visibility and support.

They want to be able to work in jobs and accepted whatever their nationality or religion, they said.

Getting this message across was one of the main aims of a recent public event hosted in Paphos by the Roman Catholic charity, Caritas, and the Learning Refuge.

A number of refugees and domestic workers living in Paphos bravely shared their stories to try and encourage a greater understanding of problems that they are facing and also to dispel any misconceptions.

One of the main points raised by a number of refugee women was to encourage the employment of females wearing a hijab.

The word hijab generally describes the act of covering up but is also used to describe the headscarves worn by Muslim women, which come in many different styles and colours.

The type most commonly worn in the West covers the head and neck but leaves the face clear.

“When do we ever see a woman wearing a hijab and working in Paphos? They are not visible in shops, hotels or anywhere that they come into contact with the public. We must try to change this and give them a chance to have a proper life and be part of the community,” a member of Caritas told the attending public.

Rehab Al Habrat, who is originally from Syria and has lived in Paphos for years, volunteers with both the United Nations High Commission for Refugees and Caritas. She wears a hijab and has faced discrimination because of this. She told the Sunday Mail that this is not an uncommon practice in Cyprus.

“A lady with a hijab is not generally accepted in Cyprus and it’s difficult for us. We want to have a normal job like every woman, and we can only do that if we take off our hijab, we’re told.”

She added that even if a Muslim woman applying for a job speaks both English and Greek and meets all of the criteria, they are still not employed because their heads are covered.

“Employers say if you want the job, take your hijab off and you will get it, and that’s not fair for us. They don’t respect us so we don’t get the job,” she said.

Naziha (her name has been changed) a young mum from Syria has been in Paphos for 18 months and is desperate to find a job but has faced a barrage of discrimination as she wears a hijab.

Naziha speaks English fluently and aspires to finish her education in Cyprus. She fled to Cyprus as it became too dangerous for her to continue to live and study in Syria.

“I was studying microbiology in one of the most amazing universities in Syria, but the last semester was very difficult as many bombs were dropped near my home. My dad told me, you are not going to be a victim here, you will be a fighter and find a better life out of here,” she told the gathered crowd.

The student arrived in Cyprus by air, disappointed and broken with a host of psychological problems, she said, but was still happy to be in Cyprus.

“But then I began the psychological war here. From the first day I saw that people were looking at me in a strange way. ‘Why is she with us? Why did she come here?’ I heard this a lot.”

Naziha also pointed out that she has also met a lot of kind people in Cyprus, and is thankful to them.

“I want to find a job, I’m young and I can do anything, and work anywhere. But everywhere that I go, I am treated in a bad way and am looked at strangely.”

She explained that even when the labour office sent her for jobs that specify English speakers, employers see her and then say, ‘Oh no we want someone that speaks Greek,’ but then they give the position to another applicant that doesn’t even speak Greek.

One of her worst experiences involved a local, unnamed bakery. Naziha was told that she had a job, they wanted an English speaker and she turned up for work. When the female store manager saw her, she was immediately and rudely rejected.

“She looked at me and said, ‘Sorry, we don’t want you here with us, your look is not so… Also, you also have to go and learn our language, you are not here on holiday and then you can come and try to work with us, Cypriots’.”

Naziha left in floods of tears.

“They want you to be nothing, it’s very hard to deal with. I didn’t come here just to be at home and do nothing and deprive my mind. I’m not like that and I don’t want to be like that. I want to try to find a job and learn Greek, just to make them know that I can learn the language.”

Al Habrat said that even young refugee and asylum seekers attending schools in Paphos are facing huge problems and that the stigma and bullying must stop.

“Children are finding it difficult in the schools, especially in the beginning.They don’t speak any Greek or English and feel like they are aliens from another planet.They don’t understand anything.”

Volunteers at the Learning Refuge in Paphos try to help out with homework and other issues as much as they can. The volunteer said that more must be done by schools to help these children and extra Greek lessons for Arab children should be given.

Currently, they offer lessons once a week for one hour, and they are over crowded with only one teacher and many children in one class.

“This is not fair for them and is not helping .They need one or two years to get the language and learn how to read and write.”

Refugee children are often bullied in school, with local kids singling them out.

Al Habrat questioned how a ten year old child from Syria can fit in ‘just like that’.