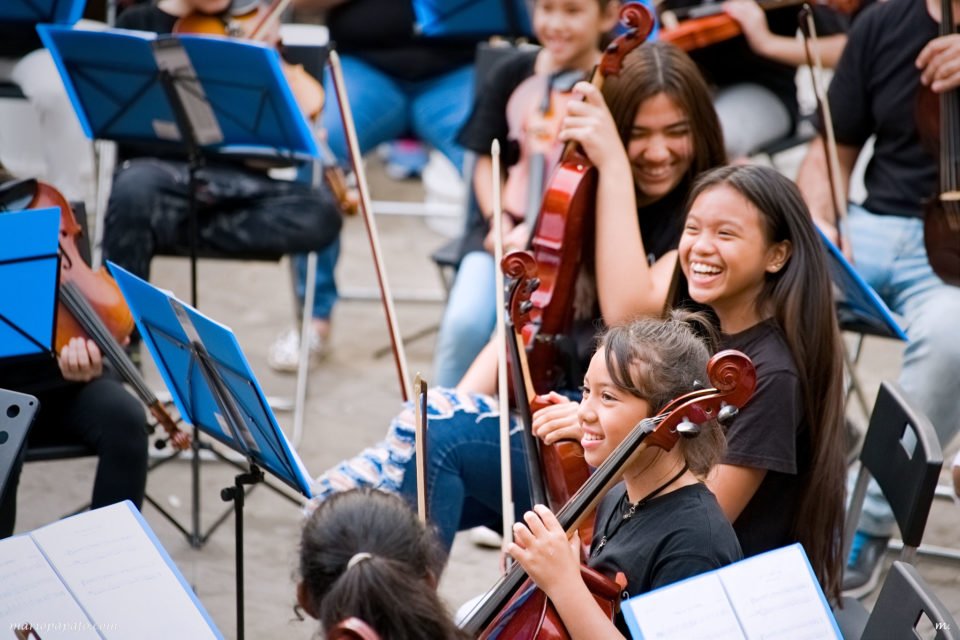 There are a wealth of advantages that come with learning to play the piano or guitar, flute or violin. Studying any instrument boosts brain power, encourages self-expression, improves memory, develops one’s social aptitude, builds confidence, and teaches both patience and discipline. But not everyone has the opportunity to learn. And that’s where Sistema Cyprus comes in, bringing the benefits of music to the children who most need and can least afford it…

Launched in 2018, and part of the worldwide El Sistema project, Sistema Cyprus aims to help kids from underprivileged backgrounds through music lessons. Working with children from the primary schools of Faneromeni in both Nicosia and Larnaca (areas which have a high incidence of school drop-out and social challenges, and are home to many underprivileged families, immigrants, and refugees), the programme offers free music lessons, free instruments, and a sense of purpose, achievement and pride for those involved.

“It’s about affording kids the opportunity to dream, to give them a goal and a sense of self-worth,” explains Nikoletta Polydorou, the project’s director. “It’s about being part of something bigger, learning the sense of responsibility that comes with owning an instrument, and earning the respect of one’s society. Being poor,” she continues, “isn’t about the absence of food or a roof over one’s head – it’s about the absence of identity. And Sistema gives these children that sense of identity: a much-needed voice, a respected place in society.”

Starting small, Nikoletta introduced the programme to inner city Nicosia in February last year. “The local kids and their parents were involved from the start, very supportive of the idea,” she adds. “This is a programme which started in the slums of Caracas in 1975, and has had measurable results over the years” – one of the first children to graduate the Venezuelan programme currently directs the LA Philharmonic, and similar successes can be seen in all 65 countries where the programme takes place – “so everyone was on board.”

Initially funded by a European Cultural Foundation grant, Nikoletta set out to engage the community, finding great support from the Nicosia Municipality who lent the project the Ledra Street Peace Room for lessons. “Then we had to find the instruments; kind members of the general public gave us more than 30 violins, three cellos, lots of guitars and flutes, and a piano, and the Yianis Christodoulou Foundation donated eight violas, five cellos, and five double basses.”

With space and instruments acquired, Nikoletta began the lessons: each of the 60-odd initial pupils receiving two hours per week in private tutorial, one hour with others who played the same instrument, and one as an entire group. “You could see the benefits from the very start,” Nikoletta smiles. “No longer were these just random kids running round Ledra; now they walked proudly to and from their lessons holding their very own violin or flute; they were part of something significant.”

But there was more that could be done, Nikoletta determined. “One day I attended a choir day held by the music schools of Cyprus. And I saw how the applause, the recognition, made these kids feel. It was a huge contrast; just kilometres away were my kids, who didn’t have the opportunity to perform, to gain such acclaim or have their families be proud of them. And so I set about organising an open concert…”

This first public Sistema Cyprus event took place in November outside the Faneromeni school, with help from an El Sistema conductor who flew in specially for the occasion. “He spent a week with the kids in lessons before the concert, and what he achieved was a miracle!” Nikoletta exclaims. “At that point, the kids had only just begun lessons, and knew just a few notes. But he got them playing actual pieces together, performing as a single community unit. It was so special. You could see such a change taking place as they played for their families and friends. They were all so proud.”

Such was the success of the event, that two other concerts have since been held: one in March at the Strovolos Municipal Theatre in cooperation with the Cyprus Symphony Orchestra – “more than 1,000 people came to see us!” – and one in June at the Bank of Cyprus Cultural Foundation, in honour of World Refugee Day.

“I don’t think,” Nikoletta acknowledges, “the kids ever imagined having such opportunities. It’s making them very happy to work towards such goals. Through music and learning, they’re becoming role models for their families and their community, gaining admiration and respect for what they’re doing. Sistema, I believe, helps give them a place in society and changes how people feel: these kids may be from a very underprivileged background, but they’re rising above that and demonstrating dedication and talent – and that garners respect.

“Of course we still need help,” she adds. “We’ve had support from various organisations, including the UNHCR, Ernst & Young, Cablenet, the Leventis Foundation, the Centre of Social innovation, Hope for Children, and Femmes d’Europe. But we’d like to develop the programme further. At the moment, we have more than 30 children on the waiting list – children we can’t help because we don’t have the instruments or the funding. And although we’ve opened a branch in inner city Larnaca, we’d still like to expand to other cities…

“Working with these children from underprivileged backgrounds, you can see immediately you’re on the right track,” she concludes. “Every day, I see them change and grow, building their sense of identity, claiming their place in society. I’m hoping, that, in the future, Sistema Cyprus will enjoy the same successes as the worldwide project; maybe we’ll be able to organise university scholarships for some of the kids, perhaps a few will be able to come back and teach with us. It’s a dream,” she laughs. “But then that’s what Sistema Cyprus is about. This isn’t just music, it’s about helping kids achieve their goals and fulfil their dreams!”

Covve: the first company to be awarded the Innovative SME Certificate in Cyprus

Oscar-nominated film to be screened next at Rialto Summer Cinema