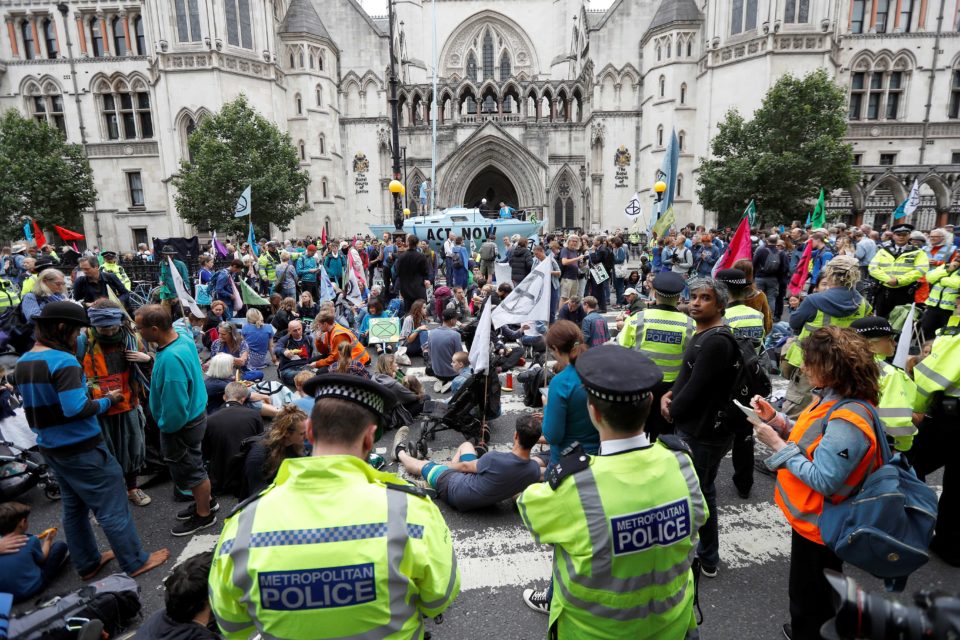 The movement, which shut down four sites in central London for 11 days in April, said the latest actions in London, Bristol, Leeds, Cardiff and Glasgow aimed to generate momentum ahead of another phase of disruption planned for October.

“Right now we’re in a phase of movement building,” Larch Maxey, one of the movement’s organisers, said outside the Royal Courts of Justice in central London, where several hundred protesters blocked the road.

“We’re going to be doing more disruption in October in major cities around the world,” Maxey told Reuters, standing near a sailboat emblazoned with the slogan ACT NOW, one of five brightly-painted vessels towed to protest sites in each city.

Extinction Rebellion said the protests would run all week and include blocking specific locations, bridges and roads. It will also hold talks, workshops, training in non-violent direct action, family-friendly activities and debates. Modelled on civil disobedience campaigns such as the U.S. civil rights movement and Britain’s Suffragettes, Extinction Rebellion has pushed climate up the agenda in Britain, where parliament declared a symbolic ‘climate emergency’ in May.

Critics of the movement say policing its protests is a major drain on resources at a time when authorities are struggling to contain an outbreak of knife crime in the capital, while its blocking of roads has inflicted losses on businesses.

The group has inspired offshoots in more than a dozen countries, including France, where riot police used pepper spray and riot shields to clear scores of protesters from a bridge over the river Seine in Paris late last month.

The country is due to host a major climate summit aimed at strengthening the 2015 Paris Agreement to curb greenhouse gas emissions late next year.

Nevertheless, with climate-related disasters unfolding faster than scientists had feared in many parts of the world, Extinction Rebellion argues that only rapid, systemic change has a chance of averting runaway global warming.

The group is demanding the government call a national emergency mobilisation to shift its net zero target to 2025 and hold a Citizens’ Assembly to determine the economic trade-offs that such a rapid decarbonisation programme would entail.

Obituary: Alexis Galanos was not your average Cypriot politician