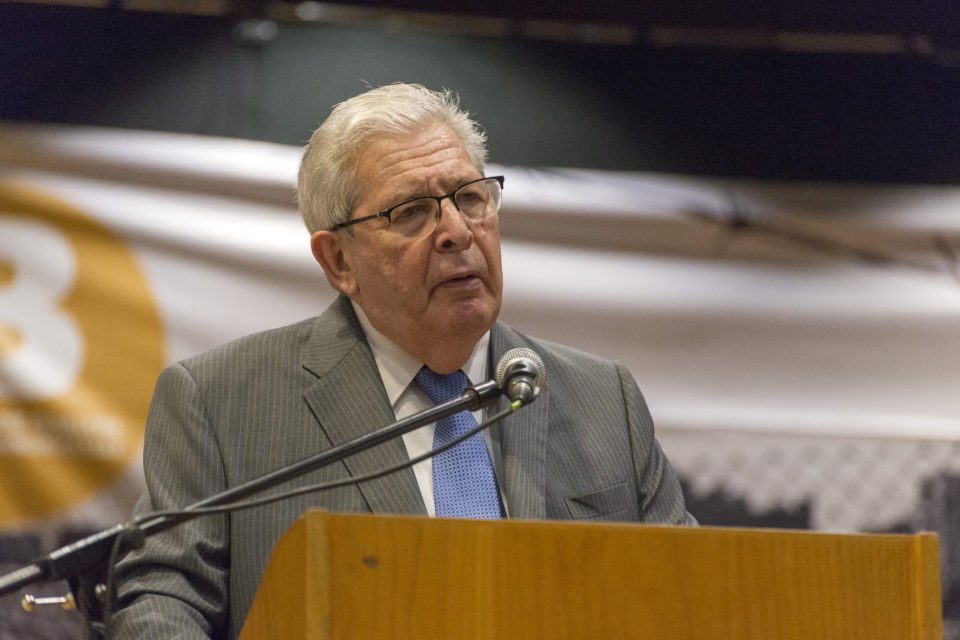 By Evie Andreou and Nathan Morley

Famagusta Mayor Alexis Galanos died suddenly on Monday at the age of 78, while on holiday on the Greek island of Kos with his wife.

He has been serving as Famagusta Mayor since 2006. His death caught those close to him by surprise since he seemed to be in good health, some of the people who spoke to him during the past couple of days said.

He reportedly felt unwell while at the beach and lost consciousness. Rescuers were not able to resuscitate him.

No information was given as to the cause of his death as yet. Cyprus’ embassy in Greece was making arrangements for him to be brought back to Cyprus in the coming days.

Famagusta councillor Andreas Flourentzos told the Cyprus Mail he had spoken to the mayor over the last couple of days about municipal matters and that he was well.

“Alexis Galanos was an esteemed Cypriot politician, who, in his long parliamentary presence, which was crowned by his parliament presidency, was always direct when it came to his love for his country,” Anastasiades said in a written statement.

Rightly so, Galanos was widely respected, not only by his voters but also by the public in general, he added

Anastasiades said Galanos was serving these past years as Famagusta Mayor and leaves as legacy “his persistent effort for the return of his beloved town and the solution of the Cyprus problem.”

Galanos, born in 1940, was House President between 1991 to 1996. He had studied Economics at King’s College, Cambridge and Law at Inner Temple.

He was one of the founders of the Democratic Party (Diko) and served as the party’s general secretary from 1989 until 1990 and as vice-president from 1990 until 1996. He also served as an MP between 1976 and 1999. In 1998, after leaving Diko over disagreements with the then leader Spyros Kyprianou, he founded the Eurodemocratic Renewal Party. He ran in the same year in the presidential elections where he garnered 4.04 per cent of votes.

Galanos spent most of his adult life yearning to return to his home in Famagusta, where he was born in 1940.

From time-to-time, he would limber up to the Dherynia viewpoint to gaze over the familiar unbroken row of ghost hotels spanning the seafront.

He knew the names of every single one and had a memory for the smallest details. The Grecian Hotel, for example, he once told the Cyprus Mail interview, was the most popular – rated deluxe – as every room had a private shower, balcony and guests were served chilled yogurt, fresh coffee, and honey for breakfast.

He thought Varosha in the mid-sixties was probably the greatest place on earth when it was a blossoming holiday resort.

“I was in my twenties, and enjoyed all the things that a young man does – especially the social life,” he said.

For him, the entire coastline stretching from Salamis to Protaras was paradise. Nothing, he reckoned, was better than seeing the golden beach awash with tourists yachting, sunbathing and water-skiing.

Like thousands of others, his life was turned upside down in 1974 when the Turkish invasion army swept across the Messaroia plain and into his world.

He never forgot hearing the monstrous blasts of heavy bombs tearing the resort apart, later recalling that the Salaminia Tower was hit so badly that the corner of the building collapsed like a deck of cards.

The images never left him. Tourism and life plunged into chaos. In one hotel, the situation was so dire that a veteran of the Coventry bombings, who was on his summer holidays, began organising a shelter for his fellow guests.

“I was working in the town providing foodstuffs and supplies to hospitals when the invasion started,” Galanos remembered. “It was not something I like to think of much”.

Within a day, the town was deserted as its 40,000 Greek inhabitants fled the approaching Turkish tanks. “We had been under bombardment for some time, so we knew what was happening, even though it did come as a great surprise to everyone,” he told me in 2015.

Galanos always looked younger than his years. His face was good-humoured, despite having endlessly relived that fateful day in his mind.

His voice was soft as he explained how people moving out of the town expected to return soon afterwards. “There was a feeling that the Turkish troops were just moving in temporarily. We thought we would go back,” he said.

But the picture changed rapidly.

That night, Galanos, along with many tired and distressed refugees camped near the town waiting for the green light to back home. Hopes that the Turkish army would pull-back or that a quick solution might be found stayed alive.

Like his neighbours, he spent 45-years feeling the dismay at not being able to return to his beloved town.

The head of the Union of Municipalities (UoM), Larnaca Mayor Andreas Vyras, said he was shocked and saddened to hear about Galanos’ passing.

“Galanos departed unexpectedly with the bitterness of Famagusta still under occupation,” Vyras said, adding that it is everyone’s duty to carry on his efforts to achieve the goal of reopening of Famagusta’s closed-off town of Varosha with its residents.

He added Galanos was a historic figure from Famagusta, of political life in general and lately also of local administration. Galanos had also served as chairman of the UoM between 2012 and 2016.

The UoM’s board will convene on Tuesday to decide how to honour Galanos, he said.

U.N. calls for hundreds of millions in more aid to fight Ebola

Minthis, the first golf club in Cyprus to be awarded with GEO Certification