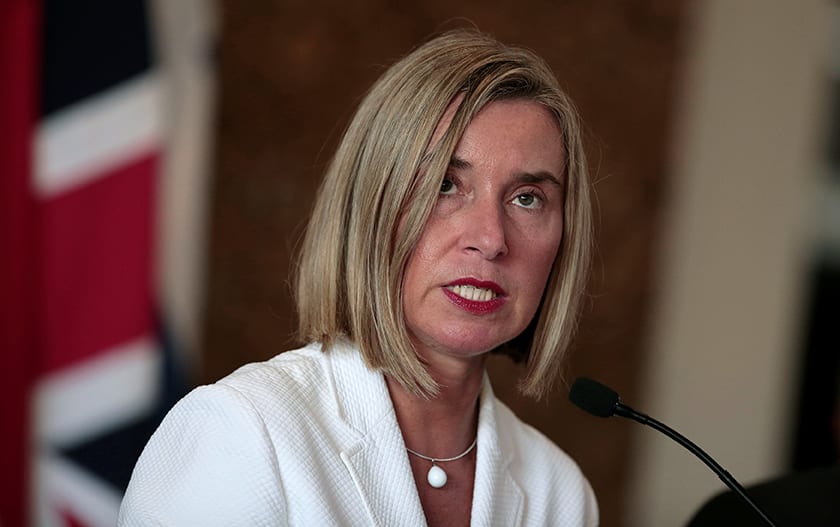 The remaining parties to the Iran nuclear deal do not see Tehran’s breaches as significant and do not intend for now to trigger the pact’s dispute mechanism, preferring more diplomacy to ease the crisis, the EU foreign policy chief said on Monday.

She spoke at the end of an European Union foreign ministers meeting after Britain said there was only a “small window” of time to salvage the deal, while Iran warned it would ramp up uranium enrichment if the EU failed to do more to that end.

U.S.-Iranian tensions have escalated since U.S. President Donald Trump decided last year to abandon the nuclear deal under which Iran agreed to curtail its atomic programme in return for relief from economic sanctions crippling its economy.

The EU ministers drew no conclusions on what action should next be taken to head off a feared U.S.-Iranian conflict. But by suggesting that Iran’s non-compliance was not significant, it could anger the United States, which last week warned it would intensify sanctions on Iran over its breaches, and it did prompt an immediate outcry from Israel, Iran’s regional arch-enemy.

“For the time being, none of the parties to the agreement has signalled their intention to invoke this article,” EU foreign policy chief Federica Mogherini told a news conference in Brussels, referring to a mechanism to punish non-compliance.

“(It) means that none of them for the moment, for the time being with the current data we have had in particular from the (U.N. nuclear watchdog) IAEA, (consider Iran’s) non-compliance…to be significant non-compliance.”

IAEA inspectors last week confirmed Iran is now enriching uranium to 4.5% fissile purity, above the 3.67% limit set by its deal, the second breach in as many weeks after Tehran exceeded limits on its stock of low enriched uranium.

The level at which Iran is now refining uranium is still well below the 20% purity of enrichment Iran reached before the deal, and the 90% needed to yield bomb-grade nuclear fuel. Low-enriched uranium provides fuel for civilian power plants.

British Foreign Secretary Jeremy Hunt said earlier in the day that Iran remained “a good year away from developing a nuclear bomb”. He told reporters in Brussels: “There is still some closing, but small window to keep the deal alive.”

Under the terms of the deal, if any party believes another is not upholding their commitments they can refer the issue to a Joint Commission comprising Iran, Russia, China, the three European powers, and the European Union.

This activates a dispute mechanism that could eventually end with a restoration of global, U.N. sanctions against Iran. Mogherini said a joint commission meeting was possible, although when and at what level had yet to be decided.

She indicated that for now the EU would focus on diplomatic efforts to save the nuclear deal, which signatories in 2015 touted as essential to ward off the risk of a wider Middle East war jeopardising global energy supplies.

“The deal is not in good health, but it’s still alive. We hope and we invite Iran to reverse these steps and go back to full compliance with the agreement,” Mogherini, adding that they were all reversible.

“(It) reminds me of the European appeasement of the 1930s,” Netanyahu said in a video statement.

“Then, too, there were those who stuck their head in the sand and did not see the approaching danger,” said Netanyahu, who has often cast Iran’s nuclear projects as a mortal menace to Israel and the wider world. Iran denies seeking a nuclear bomb.

The Brussels gathering had been called to flesh out ways of convincing Iran and the United States to reduce tensions and start a dialogue amid fears the 2015 deal is close to collapse.

In reaction to the reimposition of tough U.S. sanctions, which have notably targeted Iran’s vital oil revenue stream, Tehran has cut some of its nuclear commitments under the deal.

That led the European parties to the pact, France, Britain and Germany, to warn Tehran not to shred the deal’s terms.

Swedish Foreign Minister Margot Wallstrom suggested the Europeans would leave the door open for diplomacy but that Tehran should exercise restraint.

“It improves their chances of having a good discussion with the EU and other partners in the JCPOA (Iran deal),” she told reporters. “We encourage them to use all diplomatic means and create new diplomatic channels …to de-escalate the tense situation. We have to use every opportunity to keep the deal.”

The Islamic Republic’s nuclear energy agency said Tehran would return to the situation before the nuclear deal unless European countries fulfilled their obligations.

“These actions are not taken out of stubbornness but to give diplomacy a chance,” agency spokesman Behrouz Kamalvandi said.

“And if the Europeans and America don’t want to fulfil their commitments we will create a balance in this deal by reducing commitments and return the situation to four years ago.”

Iran says the European countries must do more to guarantee it the trade and investment dividends it was due to receive in return for U.N.-monitored limits to its nuclear capacity under the deal.

The Europeans are also trying to set up Instex, a barter-based trade conduit with Iran, but an equivalent Iranian mechanism has yet to start. Should the mechanism go ahead it would initially only deal in products such as pharmaceuticals and foods, which are not subject to U.S. sanctions.

Mogherini also said the shareholders of Instex, which now includes 10 EU members, were considering whether to include oil, something that until now has been ruled out given the threat of U.S. blowback.

Iran has said Instex must include oil sales or provide substantial credit facilities for it to be beneficial.