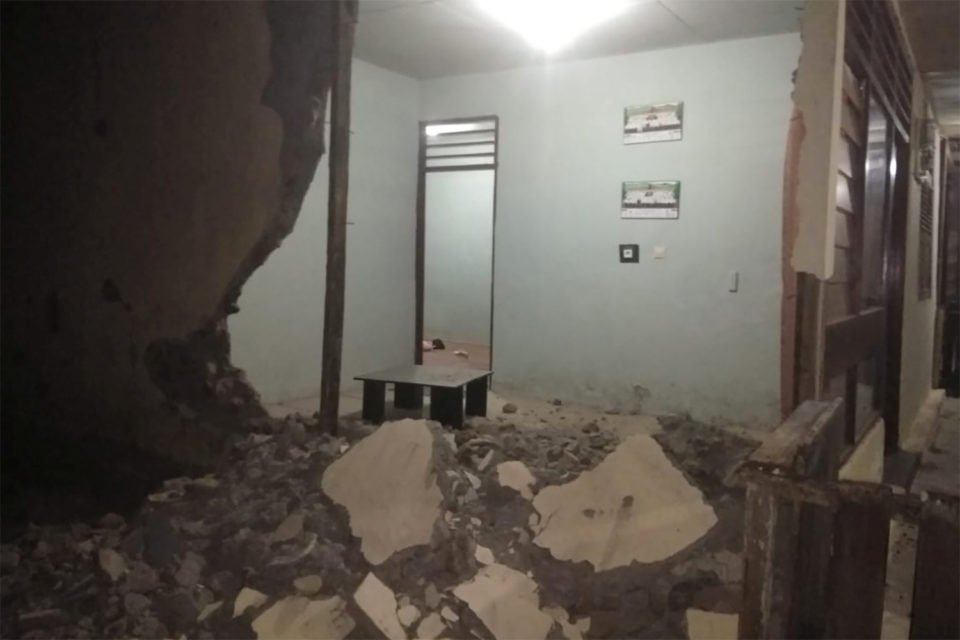 Damages inside a house are pictured following an earthquake at Labuha in Indonesia.

Indonesia’s Moluccas islands were hit by scores of aftershocks on Monday after an earthquake killed at least two people, prompting hundreds of people to flee their homes.

Rescue teams were struggling to reach parts of the area hit by the quake in eastern Indonesia on Sunday due to its remote location, warning that the death toll could rise.

Indonesia’s meteorology agency recorded Sunday’s quake at a magnitude of 7.2 at a shallow depth of 10 km (six miles) on the southern part of Halmahera in the North Moluccas. The quake was also felt in Sulawesi and in Papua.

Around 2,000 people had been displaced, while at least 58 houses had been damaged, said Agus Wibowo, a spokesman for Indonesia’s National Disaster Mitigation Agency.

Around 28,000 people live in the zone closest to the epicentre.

Two bridges had also been damaged by the quake, he said.

“We don’t wish for more victims, but we cannot rule out that possibility since access to the area is difficult and we cannot yet collect all the data regarding casualties,” Wibobo told reporters in Jakarta.

As of Monday, 66 aftershocks had been recorded and some people in South Halmahera were still taking refuge on higher ground fearful of a tsunami, Wibowo said.

Authorities did not issue a tsunami warning for the quake.

A week ago, Indonesia meteorology agency issued a tsunami warning, which was later lifted, after a magnitude 6.9 quake hit off the northeastern shore of Sulawesi, west of Sunday’s quake.

Indonesia sits on the seismically active Pacific “Ring of Fire” and is frequently hit by earthquakes and sometimes tsunamis.

The most devastating in recent Indonesian history was on Dec. 26 in 2004, when a magnitude 9.5 quake triggered a tsunami that killed around 226,000 people along the shorelines of the Indian Ocean, including more than 126,000 in Indonesia.

Last year, a tsunami hit the city of Palu in Sulawesi, killing thousands.

A 6.6 magnitude quake struck on Sunday to the south of Indonesia, west of Australia’s beach resort of Broome, shaking buildings and pushing groceries off shelves.