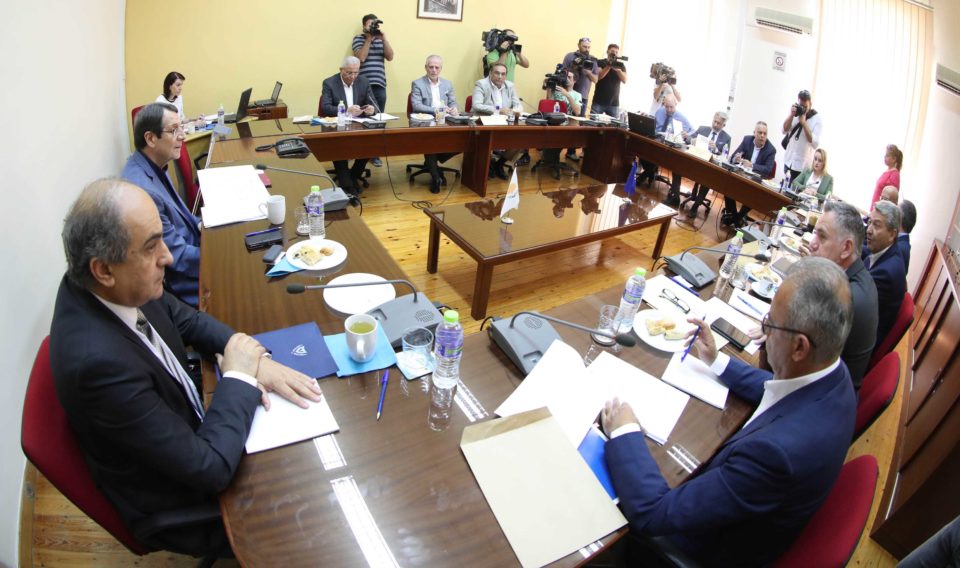 The leaders meeting on Tuesday

Greek Cypriot political parties on Tuesday rejected the proposal by Turkish Cypriot leader Mustafa Akinci to set up a joint committee on hydrocarbons.

The political party leaders were briefed by President Nicos Anastasiades at meeting in Limassol that lasted almost three hours.

Speaking afterwards, Undersecretary to the President Vassilis Palmas read a joint statement from party leaders saying the proposal from Akinci could not be accepted “as it distracts from the essence of the Cyprus problem and the need for immediate resumption of substantive negotiations with a view, if there is sufficient will from all concerned, to achieve a sustainable and functional solution to the Cyprus problem on the basis of United Nations resolutions, and the principles and values of the European Union.

“Moreover, the proposal of Mr Akinci contains provisions that do not serve the best interests of the Republic of Cyprus and the Cypriot people as a whole,” the statement added.

Speaking later, Akinci expressed regret that his proposal was rejected by the Greek Cypriot side.

He said he was surprised by the reasons of the rejection since his proposal aimed at turning the hydrocarbon sector to a field of co-operation between the two sides and diffuse tensions.

Akinci rejected the reasons cited by the Greek Cypriot side to reject the proposal, arguing that it was the Turkish Cypriots who wanted a solution more, who paid the higher cost because of the status quo.

Akinci said his proposal on hydrocarbons concerned co-operation and mutual benefit, instead of the current situation of the Greek Cypriot side handling the matter unilaterally.

The Turkish Cypriot leader said a joint committee would not hinder efforts to find a solution but make the path to it shorter.

The party leaders authorised the president to answer the Turkish Cypriot leader in writing and to send the answer to the recipients of Akinci’s proposals such as the UN chief, and the EU leadership.

“This statement is unanimous,” said Palmas.

Palmas said the meeting had been very constructive and very substantive.

“We all know very well that the parties have different approaches and views on specific issues. What was important and meaningful from this meeting was the unanimous approach as regards the proposal of Mr Akinci”.

He added that the president would prepare his response immediately in a comprehensive letter that would respond point by point.

“We will repeat our main objective is the comprehensive solution of the Cyprus problem and of course the creation of good conditions for the resumption of talks, which is the main goal. This proposal of Mr Akinci creates a distraction from the essence of the main issue, which is to solve the Cyprus problem,” said Palmas.

Anastasiades on Sunday officially received Akinci’s formal proposal for the co-management of natural resources from the head of the office of the UN Secretary-General’s Good Offices Mission Sergiy Illarionov, who had received it from Akinci on Saturday.

The proposal is a formalised version of an idea Akinci has touted in the past for the setting up of a joint committee for cooperation on hydrocarbons.

Reports from the north said Akinci wanted to change the hydrocarbons’ issue from one of tension and conflict to cooperation. The proposal involves the establishment of a joint committee under the supervision of the UN which would have the same number of members from both sides, and an independent observer.

His proposal is also said to outline the structure, targets and methodology of the committee and includes the establishment of a fund and details on how this fund would be used. Akinci also sent the proposal to the UN Secretary-General Antonio Guterres, the EU Commission and the High Representative of the EU for Foreign Affairs and Security Policy Federica Mogherini.

Turkey said on Sunday it would continue drilling for gas in waters off Cyprus if Nicosia did not accept Akinci’s proposal.

Euripides’ The Suppliants to become clear for English speakers

Free potatoes and carnations as farmers plead for help

Cyprus marks Day of the Farmer with tribute to rebel leader