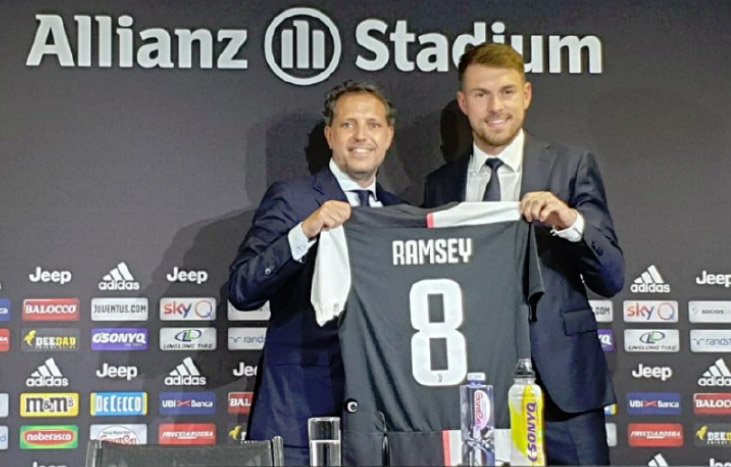 Aaron Ramsey, 28, moved to Turin on July 1 after his contract at Arsenal expired - the Wales international signing a four-year deal at Juventus.

Juventus midfielder Aaron Ramsey is looking forward to working with new head coach Maurizio Sarri having been impressed with the Italian at close-quarters last season.

Ramsey, 28, moved to Turin on July 1 after his contract at Arsenal expired – the Wales international signing a four-year deal at Juventus.

He will play under Sarri after he departed Chelsea to take the reins at the Allianz Stadium following just a season in charge of the Blues.

Sarri lifted the Europa League in his final game as Chelsea boss with a convincing win over Arsenal – having already secured a third-place Premier League finish and after reaching the Carabao Cup final.

Now Ramsey, who could not take his place in the Europa League showpiece due to injury, is excited by the prospect of teaming up with Sarri.

“I know from this coach, from his time last year in England, he definitely likes to play football and has his own philosophy and I’m sure all the players here will adapt nicely to that,” he said at his unveiling press conference on Monday.

“I think that from what I saw last season he had a very good season for Chelsea, he got to two finals and won one of them.

“He got in the top four and that is not easy to do so it was definitely success for him there but hopefully he can bring his philosophy and style to this team.”

Ramsey’s hamstring issue means he is yet to return to full training and it remains to be seen if he will join the rest of his new team-mates as they jet off to Singapore to begin pre-season.

After an 11-year stint at Arsenal, Ramsey left after the club pulled the plug on a contract offer that had been on the table, unsigned, for a number of weeks.

Juventus made a move to sign him on a free transfer and Ramsey insists, despite other offers, his mind was easily made up.

“Yes, there were other clubs but this is the right club for me and I’m so excited to be here and proud as well,” he said.

“When I knew that Juventus was interested I couldn’t refuse that, it is a great club, one of the biggest in the world and to have that opportunity to come here and play for them is a dream to come and play at the top level.”

Ramsey, who opened the press conference with a short message spoken in Italian, is not the first Wales international to turn out for the Old Lady.

Juventus broke the British record transfer fee to land John Charles from Leeds in 1957 and he would go on to win three Serie A titles and two Coppa Italias during a hugely successful spell in Italy.

“He is an absolute legend over here and for Welsh football as well,” Ramsey said when asked about Charles.

“He is definitely someone I can look up to and hopefully follow in his footsteps, he definitely took everything in and left his mark here.

“So I know how much he means to this club and the history he contributed here so he was a fantastic player and person I look up to and hope to emulate.”