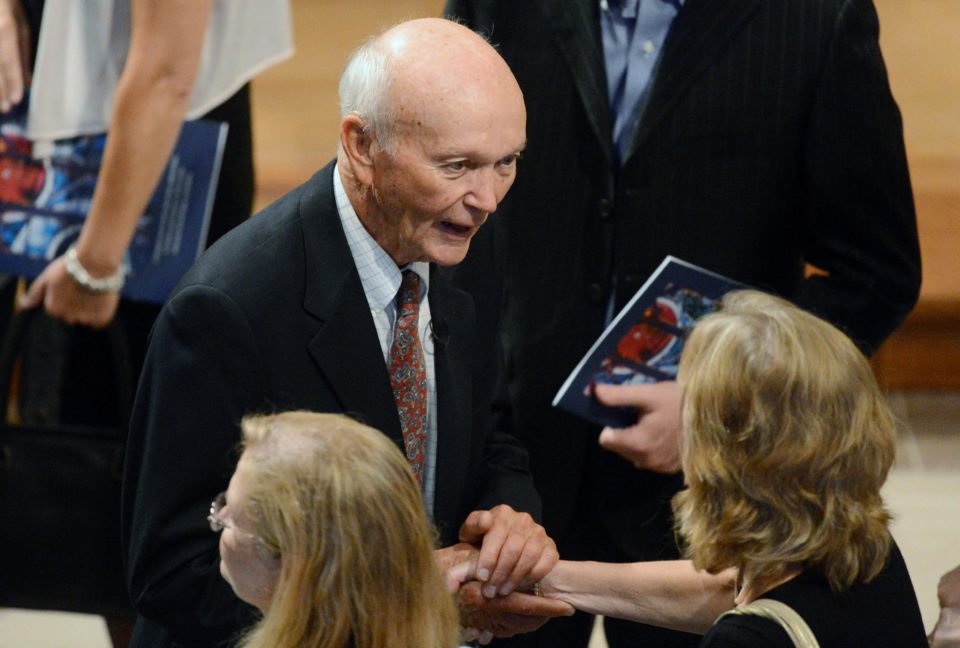 Apollo 11 astronaut Michael Collins returned to the launch pad Tuesday at NASA’s Kennedy Space Center in Florida where he flew to the moon 50 years ago along with the late Neil Armstrong and Buzz Aldrin.

“Wonderful feeling to be back at launch pad 39A,” Collins, the command module pilot for Apollo 11, said in an interview on the pad with Kennedy Space Center Director Bob Cabana, himself a veteran of four space shuttle launches and a former shuttle commander.

In the iconic 1969 moon mission, Collins, 88, stayed in lunar orbit while his crew mates Armstrong and Aldrin stepped foot on the lunar surface, an event that enraptured Americans and marked a preeminent chapter in human spaceflight.

Collins referred to an often quoted September 1962 speech by President John F. Kennedy vowing to put a man on the surface of the moon by the end of that decade.

“What Kennedy said helped us so much in our preparation for the first lunar landing,” Collins told Cabana, seen on a livestream from the launch pad, which has been refurbished by ElonMusk’s SpaceX for future crewed missions under NASA’s Commercial Crew Program.

“I’d like to transfer that spirit from where we are to where we might go and I would propose going direct to Mars under what I would call a JFK Mars Express,” Collins said.

In another commemoration of the historic launch, the spacesuit that Armstrong wore during the mission went on public display for the first time in 13 years at the Smithsonian’s Air and Space Museum in Washington.

NASA is aiming to send humans back to the moon as soon as 2024 in a hastened timeline set by U.S. Vice President Mike Pence in a March speech to the National Space Council, the White House’s revived space policy body.

Collins said there was “a great deal of merit” to the recent push for a lunar return.

He joined Cabana as the U.S. space agency counted down to the exact minute in which the Apollo 11 crew’s massive Saturn V rocket roared into blue skies on a sunny day in 1969.

As Americans celebrate the moonshot anniversary for most of this week, with Saturday being the anniversary of the lunar landing, NASA is aiming to revive its new lunar program dubbed Artemis, the Greek goddess and twin sister of Apollo.

“Well I love the word Artemis, the twin of Apollo. I think that’s a wonderful name, and more important than the name, it’s a wonderful concept,” Collins said of the lunar initiative.

NASA chief Jim Bridenstine has repeated that the United States will return humans to the lunar surface as part of a broader goal to reach Mars. The Mars mission requires a deep understanding of living in space, which the moon could provide as a “proving ground” beforehand, according to Bridenstine.

Collins was to be joined Tuesday evening at a gala in Cape Canaveral, Florida, by Charles Duke, the youngest human to walk on the moon as an Apollo 16 astronaut, Apollo flight director Gerald Griffin, Apollo 9 astronaut Rusty Schweickart, and four-time shuttle veteran Charlie Precourt.

Plant of the week: Plant that gave rise to burning bush moments