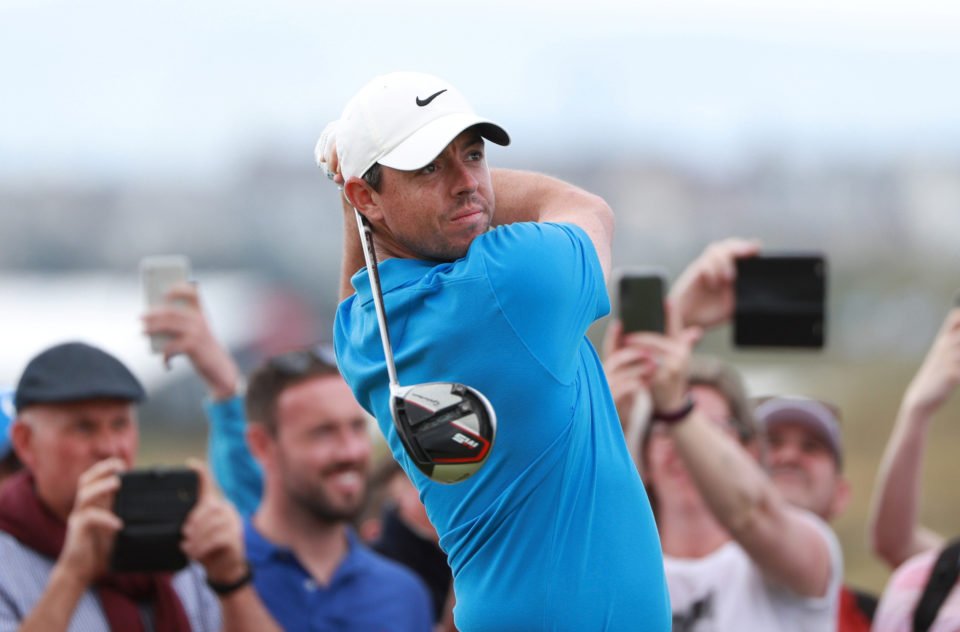 The majority of spectators will no doubt be hoping one of the Northern Irish trio of Rory McIlroy (above), Graeme McDowell and Darren Clarke can claim the famous Claret Jug

If knowledge is power then local expertise could be everything as Royal Portrush hosts the Open Championship for the first time since 1951.

Sixty-eight years after Max Faulkner won the only Open to be staged outside Scotland or England, Portrush has again welcomed the world’s best golfers to Northern Ireland to do battle for the Claret Jug.

The anticipation has bordered on the feverish since the R&A made the official announcement in October 2015, news expected after club members voted overwhelmingly in favour of the required course changes the previous August.

The biggest of those saw two new holes – the seventh and eighth – created on the Dunluce Links from land on the adjacent Valley Links, with the existing 17th and 18th holes used for the vast spectator village and media centre.

A sell-out crowd of 237,750 is due to attend, setting a record for an Open staged outside St Andrews, the majority of which will no doubt be hoping one of the Northern Irish trio of Rory McIlroy, Graeme McDowell and Darren Clarke can claim the title.

At the age of 50, Clarke’s chances appear slim, but the 2011 champion, who has a house overlooking the course, has been in high demand as a practice partner as players attempt to tap into his reservoir of knowledge about the venue.

Darren Clarke may have local knowledge of Portrush but he is not expected to fare well this week. (David Davies/PA)

Former world number one Justin Thomas arranged a practice round with McIlroy more than a month ago, while Tiger Woods tried in vain to learn from Brooks Koepka’s caddie Ricky Elliott, a Portrush native who often competed against McDowell when they were teenagers.

“I texted Brooksy and I said, ‘Mind if I tag along and play a practice round?” Masters champion Woods revealed ahead of his bid for a 16th major title. “I’ve heard nothing.”

Woods has played just 10 tournament rounds since his victory at Augusta National three months ago, taking four weeks off before missing the cut in the US PGA Championship, then finishing ninth in the Memorial Tournament and 21st in the US Open.

Tiger Woods has barely played since winning the Masters in mid-April. (Richard Sellers/PA)

The 43-year-old went straight from Pebble Beach to Thailand on a family holiday and concedes his game is not as sharp as he would like but believes he has no option but to play a limited schedule.

“I want to play here as long as I possibly can, and you have to understand if I play a lot, I won’t be out here that long,” Woods admitted.

McIlroy may be the bookmakers’ favourite but Koepka is again the man to beat, with the world number one seeking a fifth major title in his last 10 starts and a place in history.

Koepka has finished second, first and second respectively in the first three majors of the year. No player in the modern era has placed in the top two in all four majors in a calendar year.

In contrast, McIlroy has not won a major since the 2014 US PGA Championship. His latest opportunity disappointingly fizzled out in the final round of the US Open at Pebble Beach.

However, he set the course record of 61 at Portrush as a 16-year-old and is enjoying the most consistent season of his career with 11 top 10s from 14 starts, highlighted by victories in the Players Championship and Canadian Open.

McIlroy admitted during last week’s Scottish Open it would “mean the world” to win the Open on home soil but has otherwise attempted to take a low-key approach with a limited number of practice rounds and a determination to enjoy the historic occasion.

“One of my mantras this week is to look around and smell the roses,” said the

30-year-old, whose Open form figures read fifth, fourth, second since he was unable to defend his title at St Andrews in 2015 due to an ankle injury sustained while playing football.

“It’s a wonderful thing, and to be quite a big part of it is an honour and a privilege,” said McIlroy.

“This is bigger than me, and if you can look at the bigger picture and see that it takes a bit of the pressure off. Having that perspective might make me relax a little more.”

Our View: Using the law of necessity only when it suits

Apollon and AEK look to progress in Europa League