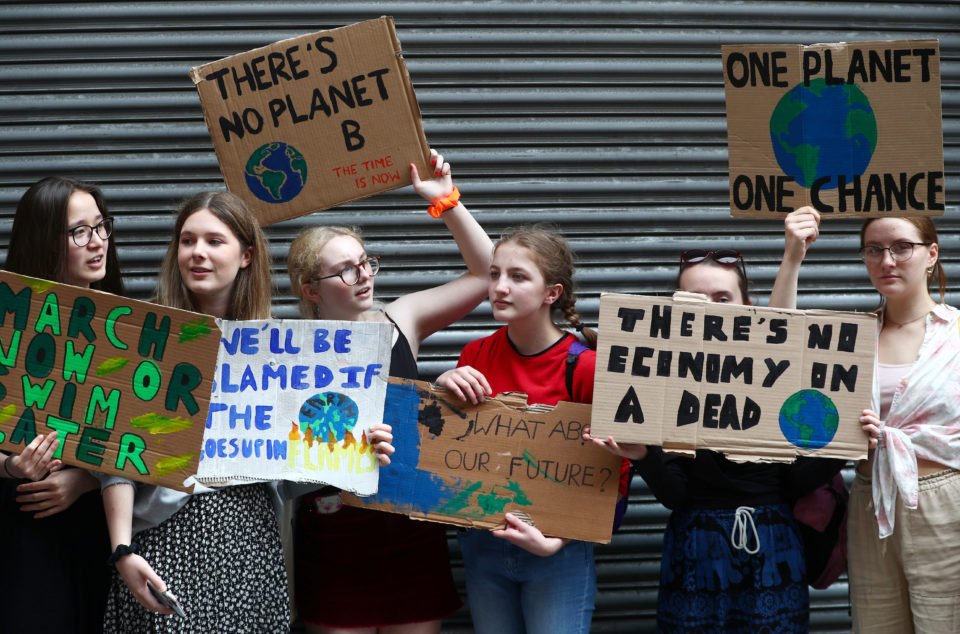 London high-school student Anna Taylor used to lament the lack of protest in Britain over what she saw as the growing threat of climate change – until her friends told her it was time to act.

“They said, ‘Instead of complaining, why don’t you actually do something about it’,” she remembered.

So last December, inspired by teenager Greta Thunberg’s lone climate protests outside Sweden’s parliament, Taylor met with other students in south London, where they set up the UK Student Climate Network and began planning a first protest for February.

“We thought we might get 100 people maximum,” the 18-year-old told the Thomson Reuters Foundation in an interview.

“I’m not really sure how I survived,” she admitted. “I never would have thought it would have grown this quickly.

“A lot of the time I think I’m dreaming, to be honest,” she added. But “it’s a really powerful time to be a teenager”.

Just how powerful is evident in British politics. After increasingly disruptive protests by students skipping school and Extinction Rebellion activists, Britain in May became the first country to declare “a climate emergency”.

Last week, the government committed to reducing its planet-warming emissions effectively to zero by 2050.

Those moves are just a start in Taylor’s view.

“We’re not discussing the climate crisis as much as we should be,” she said.

Negotiations over Brexit are pulling attention from more serious issues such as climate change and the environment, Taylor said.

Britain needs “a new government that takes the climate crisis as its priority and understands the deep connection between (that) and social and economic inequalities”, she said.

But as the young climate strikers gain the vote – one of the movement’s demands is to lower Britain’s voting age from 18 to 16 – that may well shift, Taylor said.

“We should stop waiting for politicians to change and start replacing them,” she told business, government and civil society leaders at a climate event, to thunderous applause.

Companies and individuals also need to step in and quickly do all they can to reduce emissions, she urged.

“We’re calling for you to make the changes and stand alongside us as we take drastic climate action,” she said.

Taylor – straight-talking and quietly confident – coordinates with her loose but fast-expanding network of activists largely online, using social media and other tools.

And the protests are quickly growing in size. London has seen up to 20,000 students turn out, she said, with 50,000 joining a weekly strike across Britain.

Some schools have supported their pupils taking Fridays off to join the protests, while others have banned them from attending or even suspended them from school, she noted.

Meanwhile, inside the classroom, education on climate threats remains mostly inadequate, she said.

“In the last nine months I’ve learned more than I had the entire time at school,” she said.

Reform of Britain’s national curriculum “to address the ecological crisis” is one of the movement’s demands.

British student activists are now preparing for their next big school strike on July 19 – and what they hope, in September, will be the largest general strike in Britain since 1926, pulling in adult members of the public too.

Nearly a century ago, 1.7 million workers stopped for three days to protest an effort by the British government to cut wages and protection for coal miners.

This time, students are hoping their parents and many others will join them on the streets to demand swift action on climate change stoked by the burning of coal and other fossil fuels.

“Students recognise the threat to our future and now the public is beginning to recognise that as well,” Taylor said.

There are no excuses for such a vile crime