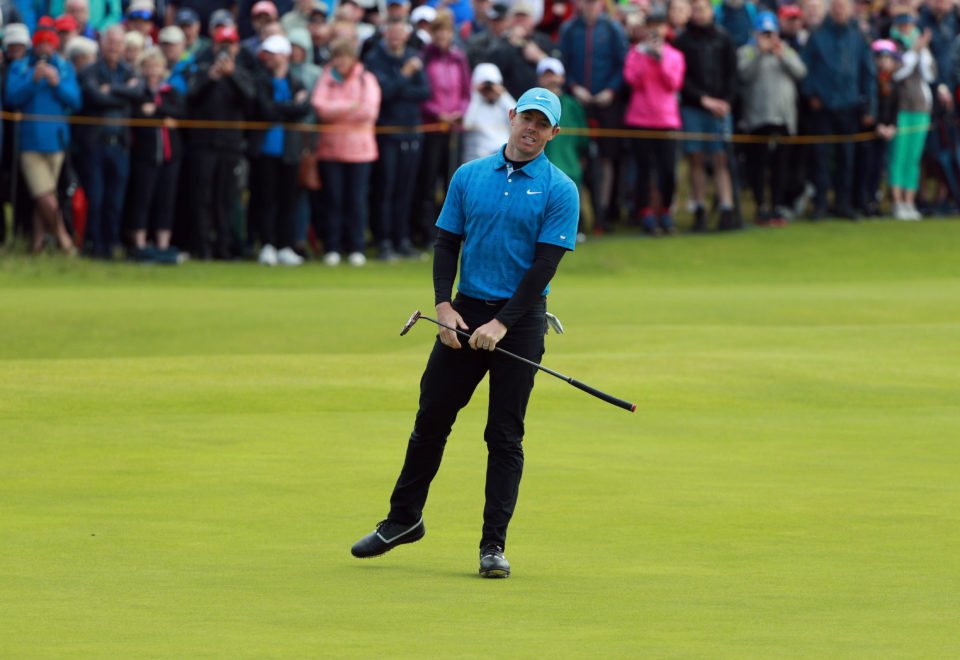 Rory McIlroy’s Open Championship hopes were in tatters after a first-round horror show at Royal Portrush on Thursday ended with the home favourite carding an eight-over-par 79.

All eyes were on McIlroy as the Open returned to Northern Ireland for the first time in 68 years, but his hopes all but disappeared with a sickening quadruple bogey at the first hole.

The four-time major champion ended his day not only looking up at a leaderboard headed by American J.B. Holmes, but knowing he will need a stellar second round merely to make the halfway cut.

Ireland’s Shane Lowry was the clubhouse leader for a couple of hours after a four-under-par 67 on a day of wind and squally showers, mixed with dazzling sunshine.

A large group two back included world number one Brooks Koepka, who made an ominously good start with a tidy performance that was bogey-free until a wayward drive at the 17th.

Koepka, seeking to complete one of the greatest major championship years after going second, first and second at the Masters, PGA Championship and US Open, was guided around Portrush by caddie Ricky Elliott, who hails from the area.

“He just tells me where to hit it and I go from there,” Koepka said of Elliott.
“The game plan’s pretty concrete. It’s actually quite easy. I really don’t have to do much thinking. I just go out there and play.”

Other leading names did not enjoy their opening rounds at the last major of the year.
Defending champion Francesco Molinari of Italy struggled to a three-over 74, former winner Phil Mickelson shot 76 and Masters champion Tiger Woods, among the late starters, finished seven-over as he struggled badly.

McIlroy once scored 61 around Portrush as a teenager but began his challenge for the Claret Jug he won in 2014 like a Sunday morning amateur.

He was cheered to the first tee but those cheers quickly turned to groans.
McIlroy’s opening tee shot went out of bounds, breaking a spectator’s phone in the process. His follow-up found heavy rough and from there he struck his next shot into an unplayable lie in a bramble bush.

After taking a penalty drop, McIlroy chipped on to the green and two-putted. He picked his ball out of the hole, to sympathetic applause, with an ugly eight on his card.

Earlier, Graeme McDowell drew loud cheers from the packed galleries as he got to three under after 14 holes on his hometown course but he leaked five shots in the last four holes.

The 148th Open began with McDowell’s compatriot Darren Clarke striking the first tee shot on an historic morning on the Antrim coast. Clarke made three birdies in his first five holes before carding level-par 71

One of the biggest roars greeted Emiliano Grillo’s hole-in-one on the par-three 13th. The 26-year-old Argentine’s ace was the first at the Open since Louis Oosthuizen in 2016.