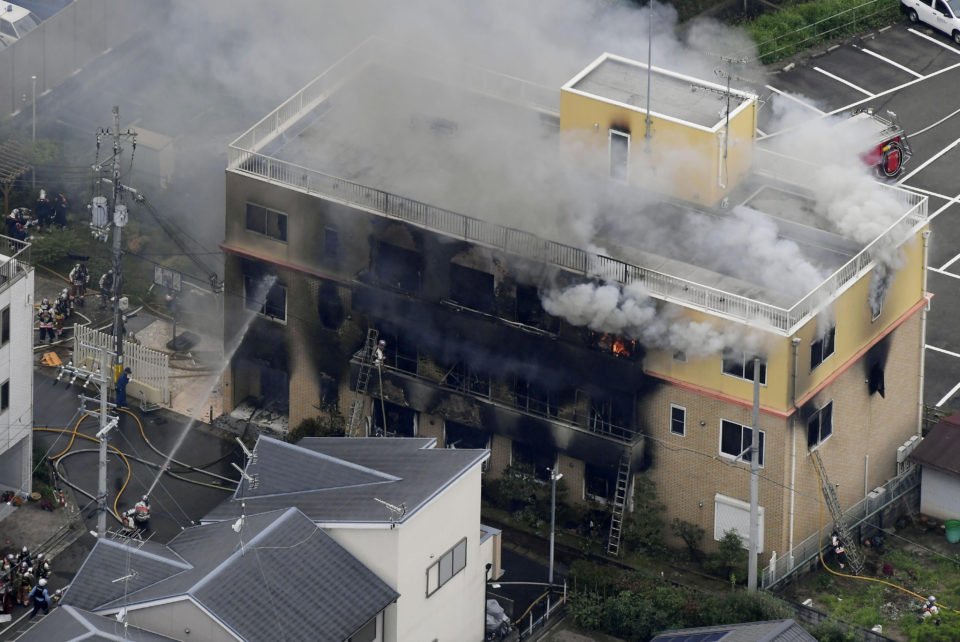 An aerial view shows firefighters battling fires at the site where a man started a fire after spraying a liquid at a three-story studio of Kyoto Animation Co. in Kyoto, western Japan, in this photo taken by Kyodo, July 18, 2019. Mandatory credit Kyodo/via REUTERS ATTENTION EDITORS - THIS IMAGE WAS PROVIDED BY A THIRD PARTY. MANDATORY CREDIT. JAPAN OUT. NO COMMERCIAL OR EDITORIAL SALES IN JAPAN.

Fire swept through an animation studio in Japan on Thursday and 23 people were feared killed and scores injured, with the cause suspected to have been arson after a man was seen shouting “die” as he doused the building with petrol.

Prime Minister Shinzo Abe called the fire in the city of Kyoto – the latest grisly killing in a country known for its low crime rates – “too appalling for words” on Twitter and offered condolences to the victims.

Police had taken a 41-year-old man into custody who had shouted “die” as he poured what appeared to be petrol around the three-story Kyoto Animation building shortly after 10 a.m. (0100 GMT), public broadcaster NHK reported.

Thirteen people were confirmed dead and at least 10 more had no vital signs after they were found in the studio, an official for the Kyoto City Fire Department said.

White and black smoke billowed from the windows of the building, television footage showed.

“I heard the sound of fire engines and stepped outside my house, and saw big flames spewing out of the building,” NHK quoted a 16-year-old boy as saying.

“Fire department officials were trying to rescue the injured in a nearby park but it seemed like there weren’t enough of them,” he said.

The studio produces popular series such as the “Sound! Euphonium”. Its “Free! Road to the World – The Dream” movie is due for release this month.

The 10 people without vital sounds were found in the studio, some on third floor and others in a staircase leading up to the roof, the fire official said.

Another 36 were injured, 10 of them seriously, the official said.

The suspected arsonist was injured and was being treated in hospital, so police could not question him, NHK said.

Violent crime is relatively rare in Japan but occasional high-profile incidents have shocked the country.

Less than two months ago, a knife-wielding man slashed at a group of schoolgirls at a bus stop in Kawasaki, a city just south of Tokyo, killing one girl and the father of another, while injuring more than a dozen children.

In 2016, a man armed with a knife broke into a facility for the disabled in a small town near Tokyo and killed 19 patients.

Italy may be on wrong path in fighting coronavirus contagion – scientist

EasyJet grounds fleet as pandemic pushes airlines to the brink