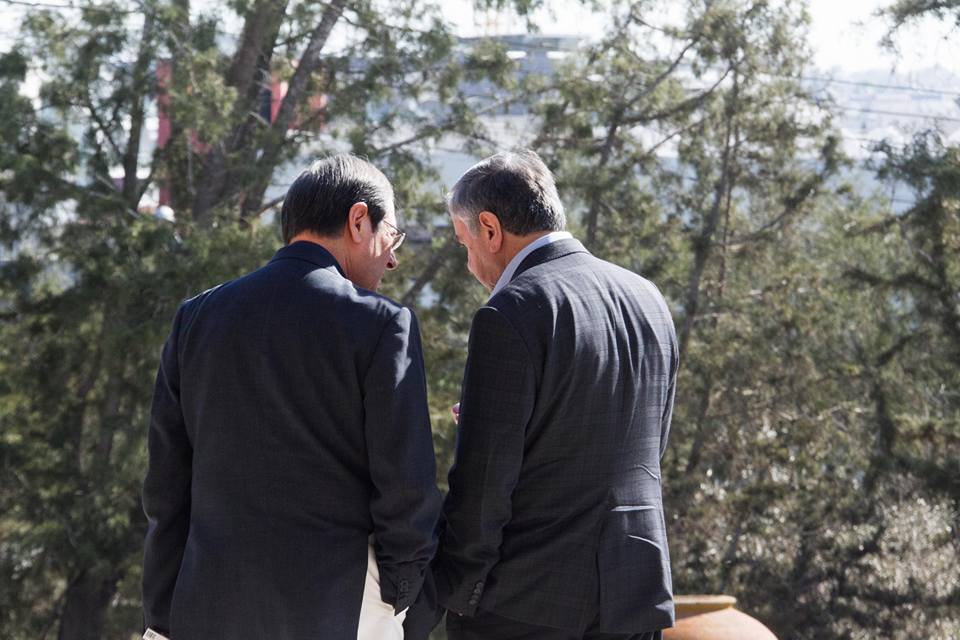 The leaders at Mont Pelerin in November 2016

The leaders of the two communities must first come to an agreement on the way forward and then reach out to the UN Secretary General Antonio Guterres, a UN source said on Friday.

The UN Secretary-General told the leaders at the end of the Conference on Cyprus in Crans-Montana two years ago that he wanted both of them to get back to him when they were ready with a plan on when, how, and where they want to meet and do a deal, and not before.

The leaders, the source added, need to meet, have their discussion and agree on something before going to the secretary general.

Each side has currently a different perspective as regards the convening of a conference, the Un source added.

Asked if it would be better for a meeting in the presence of UN Secretary-General’s special envoy Jane Holl Lute, the source said it was up to the leaders to decide which people were involved.

Lute has discussed the possibility of a conference with the two sides, the source said, adding that “Akinci talked to Lute about his proposal for a five-party conference.”

Government Spokesman, Prodromos Prodromou, said Thursday that with his proposal to convene an informal conference with the same format as the one of that held in Crans-Montana, Akinci was essentially adopting one of the Anastasiades’ proposals that were submitted in writing to Guterres in a letter on June 14.

On Friday, Akıncı said the Turkish Cypriot side wanted clarity from Anastasiades.

“We see that this is also a growing desire among many members of the Greek Cypriot community. What does the Greek Cypriot leader want? What is his goal? What kind of a future does he envisage in Cyprus? Different statements at different venues or events should end,” the Turkish Cypriot leader said during a speech to mark the anniversary of the 1974 Turkish invasion.

“He sometimes voices a two-state solution and a decentralised federation on another day. His talk for a parliamentary system with a permanent Greek Cypriot president and Turkish Cypriot vice-president and rotating prime minister instead of a rotational presidency has created confusion. How much more will the Greek Cypriot leader’s mixed messages continue? All these questions need to be answered at the informal five-party meeting I have requested the UN-Secretary General Antonio Guterres to convene,” he said.

Pro-reunification group Unite Cyprus Now welcomed the development and called on all partied involved to put words into action and set aside any conditions for the benefit of the country.

“It is crunch time for Cyprus and the success of this initiative could determine the future of the country. We call the guarantor powers to play a constructive role and refrain from actions that would damage or hinder this initiative. We expect all sides to act responsibly towards the people of the country and to avoid the blame game,” UCN said in a statement.

“We expect commitment by all parties involved in reaching the best and only viable solution for a stable and united Cyprus, that of a bizonal, bicommunal federation so that we can become a normal country, which is what all the people of the island want.”

Meanwhile, the UN Security Council will be briefed on Friday at 3pm New York time by the UN Secretary-General’s Special Representative and Head of the UN peacekeeping mission in Cyprus Elizabeth Spehar ahead of a vote on UNFICYP’s renewal.