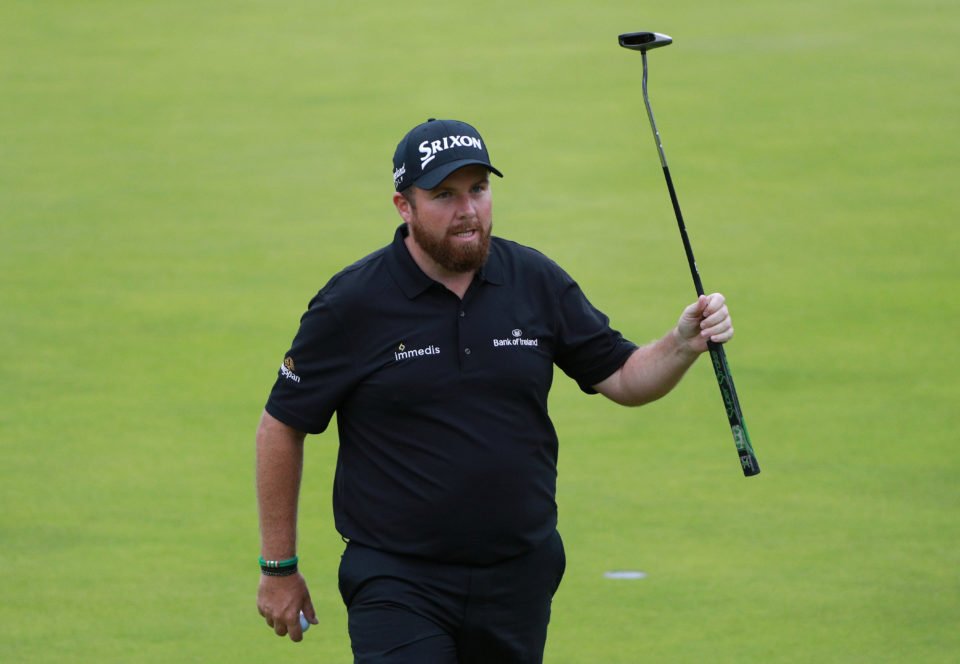 A year after sacking his caddie following his fourth straight missed cut in the Open, Ireland’s Shane Lowry will take a share of the lead into the third round of the year’s final major.

Lowry carded a second consecutive 67 at Royal Portrush to join American JB Holmes on eight under par, with Tommy Fleetwood – who could follow Ryder Cup partner Francesco Molinari in lifting the Claret Jug – and Lee Westwood a shot behind.

Olympic champion Justin Rose is a stroke further back alongside Cameron Smith and Justin Harding, with world number one Brooks Koepka ominously poised on five under in pursuit of a fifth major win in his last 10 starts.

Former champion Jordan Spieth was alongside Koepka after a 67, but Tiger Woods missed the halfway cut despite battling back from his worst ever opening round in the Open with a battling 70.

Lowry, who had stormed into a two-stroke lead with six birdies in his first 10 holes before dropping shots on the 14th and 18th, said: “I had a great time today, it was just unbelievable. One of those days where you find yourself pinching yourself.

“I can’t explain how good the crowds were, a day that I’ll remember. Walking down 18 was something special. I’m a bit disappointed to bogey the last but I’m right where I wanted to be and delighted with my two days’ work.

“I’m in a great position going into the weekend of an Open Championship but there’s two long days left. There are times when it’s not going to be easy and I’ve just got to take it on the chin.”

Asked about the enormous support he will receive over the weekend, the 32-year-old from Offaly added: “Next week I’l be in Memphis and there’ll probably be 10 men and a dog following me. Tomorrow there’s going to be thousands cheering me on so I’m going to enjoy it.”

Fleetwood was expected to contend for one of the game’s biggest prizes this year after his consistent displays in 2018, the Ryder Cup star finishing 17th in the Masters, second in the US Open – after a record-equalling 63 in the final round – 12th in the Open and 35th in the US PGA.

However, so far this season his best result is a tie for 36th at Augusta National and the 28-year-old also failed to convert good chances to win the Arnold Palmer Invitational and Players Championship earlier in the year.

A bogey on the first was quickly cancelled out by a birdie on the par-five second and Fleetwood also picked up shots on the fifth, 12th, 13th and 15th before bouncing back from a bogey on the 16th to birdie the last.

“Yesterday I felt like it was a lot more stress-free, today I made two or three really good par saves but I am happy with the challenge,” said Fleetwood, who partnered Molinari to four wins out of four at Le Golf National last year.

“It’s not going to be all-singing and all-dancing in majors and I was up to the test. I think all you can do is you can put yourself up there and gain experience that way and know how things pan out on a Saturday and Sunday at a major.

“I think last year I teed off on the last day at five under and birdied the first and Frankie ended up with a birdie on the last to get to eight (under). I wasn’t miles away with not very long in the tournament to go so I’ve got that behind me.”

Rose was also in contention at Carnoustie and finished in a tie for second, his best result in the Open since finishing fourth as 17-year-old amateur at Birkdale in 1998.

“It was nice to get that monkey off my back because up until then I had not been able to beat my 17-year-old self,” the 2013 US Open champion said. “I’m not getting ahead of myself but it’s a good position to be in.”

Westwood extended his own unwanted record of most top-three finishes in major championships without a victory to nine when he was joint second in the 2016 Masters and also let slip a two-shot lead after 54 holes in the 2013 Open at Muirfield.

“I’m 46 years old and still competing with these young lads,” Westwood said. “I won last year so there’s no pressure on me. I just go out there and have fun.