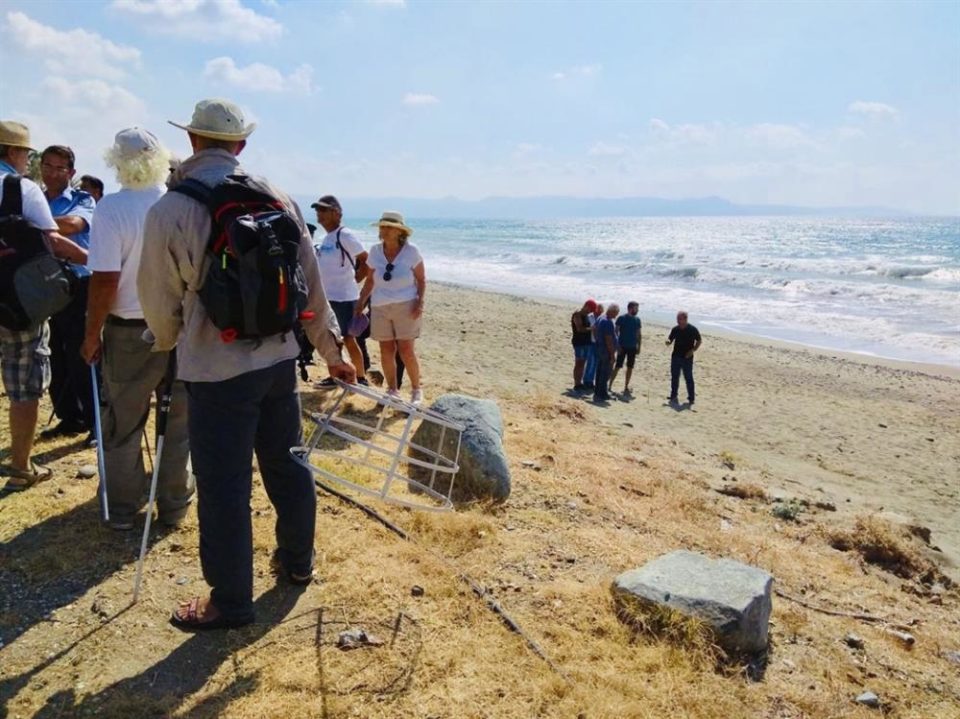 Photo from Phileleftheros during first confrontation on the beach

The nesting of endangered sea turtles on the protected beaches of Argaka should not be seen as against the interests of the local community, Disy president Averof Neophytou said on Friday.

The experts, among whom was also a representative of the council of Europe, were at the beach to place protective cages above sea turtle nests.

Pelopidas, along with several Argaka residents, verbally attacked the experts on the basis that there were fewer sea turtles than the group was accommodating for, and claimed that more cages were being placed so that they could collect higher sums from the fisheries department.

Speaking on Astra radio on Friday, head of the team of experts Myroulla Hadjichristoforou staunchly denied these claims, and said that the programme has been in operation in the area for 30 years and has received awards for its activities.

Pelopidas reportedly even stood on top of a sea turtle nest and prohibited the placement of a cage, claiming that there were no turtle eggs, pushing the experts to dig up the nest to see if he was right.

At the specific beach, part of the Polis-Yialia special area of conservation protected by the European Natura 2000 legislation due its role as an important breeding site in the Mediterranean for the endangered Loggerhead (Caretta Caretta) and Green turtles (Chelonia mydas), beach beds and umbrellas had previously been placed without the necessary permission of the central beach committee.

Pelopidas also justified his behaviour by claiming that the group did not have permission from local authorities to be on the beach, even though the programme is contractually covered by the department of fisheries.

According to daily Phileleftheros, the angered Argaka residents were emboldened by the media coverage they received in March after a strip of around 700 metres of acacia trees of the neighbouring Mavralis state forest which lined the protected sea turtle spawning beaches of Limni and Argaka were bulldozed and burned on site.

Police were called to the scene in Argaka to de-escalate the situation. The experts were asked to leave and told they would be informed of any further action.

Police spokesman Christos Andreou said the force would investigate the “serious issue” between those on the sea turtle protection educational programme who “had all necessary licences to be in the area,” and the Argaka mayor and residents.

Hadjichristoforou said on Friday that the group will continue its sea turtle protection programme on the Argaka beach.

On Friday, Neophytou said that “yesterday’s events… do not honour the area or Cyprus.

“The breeding of Caretta caretta and Chelonia mydas sea turtles is a blessing and a great advantage… which provides additional value to the Paphos area and Cyprus as a whole.”

Neophytou highlighted that “any developments in the area must abide by the legislation and regulations in place and must be completely respectful of the environment.”

Sea turtles and their eggs have been under Cyprus legislation since 1971, as along with Turkey the island is the almost exclusive nesting place for the Green turtle, while the Caretta caretta also breeds in small numbers in other countries in the region.

Pottery takes on a variety of meanings